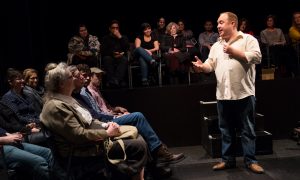 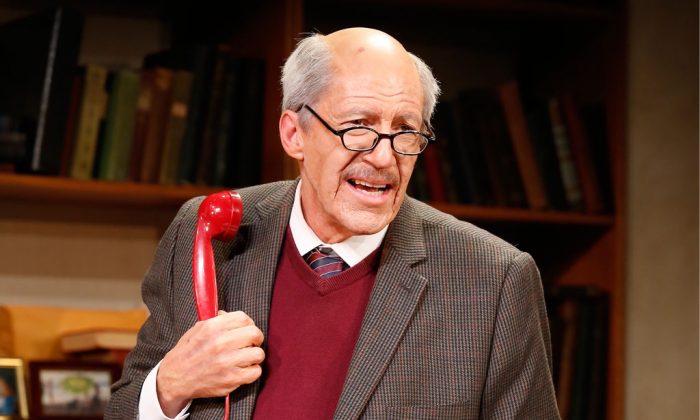 NEW YORK—”Wiesenthal” is the one-man off-Broadway show about the Nazi hunter written by and starring Tom Dugan.

The play takes place in Simon Wiesenthal’s office (the Jewish Documentation Center in Vienna, Austria) during April 2003. It is the last day before the 93-year-old retired—he died two years later—and he speaks to a group of visitors about his life and career.

While the man who brought 1,100 Nazis to justice was certainly obsessive, Dugan’s script and his acting highlight his dry sense of humor. A frumpy nonagenarian, he pokes fun at the description of himself as a “Jewish James Bond,” pointing out that he drives an old Peugeot, not an Aston Martin. He does claim he has sex appeal.

Wiesenthal rejected the idea of collective guilt and believed people should be held responsible for their own actions.

He goes on to recount the key events in his life or, as he put it, his “greatest hits.”

Wiesenthal was born in 1908 in the Austro-Hungarian Empire and was trained as an architect. He and all his relatives (including his mother) were seized by the Nazis.

He managed to send his wife away to Poland, but throughout the war, he believed she was killed during the Warsaw uprising. Wiesenthal spent time in different concentration camps until he was liberated by the American Army.

He initially worked with the Americans, assisting them with prosecution of Nazi war criminals. However, with time, inertia set in, and the Army personnel lost interest in the pursuit. Wiesenthal continued on his own.

He received international attention when he helped locate Adolf Eichmann, one of the key figures in the implementation of the Holocaust. Wiesenthal describes this man, responsible for the murders of millions, as looking like a simple accountant.

Interestingly, the Nazi hunter was himself somewhat similar in that he was basically a researcher. (The set by Beowulf Borritt contains bookshelves filled with old volumes.)

Wiesenthal did not act as a prosecutor or a member of Mossad (the Israeli secret police, who captured Eichmann). Rather, he meticulously tracked the Nazi down, locating him in Argentina, and then handed over the information to the Israeli authorities.

One of the most powerful sections of the play deals with Anne Frank. Though her diary became a bestseller and was followed by a successful play (and later a movie), there were persistent claims that the book was fabricated.

Wiesenthal attributed this to former Nazis telling their children that the Holocaust was an exaggeration by the Jews. He asked one of these doubters what it would take to convince him that the diary was genuine. The answer was to find the officer who arrested Frank and her family.

This was a daunting task, but Wiesenthal achieved it, identifying and then assisting in the apprehension of Karl Silberbauer, who confessed to his actions. On the other hand, Wiesenthal speaks of another Nazi he found, Franz Murer. Despite the testimony of Holocaust victims, Murer was acquitted.

Wiesenthal rejected the idea of collective guilt and believed people should be held responsible for their own actions. That this is still timely is confirmed by the recent events in France and the irresponsible allegation by Rupert Murdoch and others that somehow all Muslims were to blame for the jihadists.

Dugan is completely convincing and charming as the Nazi hunter, who has to interrupt recounting his successes to make futile phone calls to verify the address of another suspect and to make a note of his wife’s request that he buy a container of milk on his way home.

The 90 minutes of “Wiesenthal” pass very quickly, thanks to Dugan and his director, Jenny Sullivan. If the script glosses over some of the more troubling aspects of its subject’s life—for example, he doesn’t seem troubled by the Mossad’s sending out letter bombs to alleged ex-Nazis—this is supposedly his own version of his career.

Dugan comes out after each performance to take questions and answers about Wiesenthal and the play. He looks strikingly different without the padding and explained that he shaves his head to look more like Wiesenthal. An Irish Catholic from New Jersey, he worked with a dialect coach to perfect his Yiddish accent.

As to the reasons for his interest in Wiesenthal’s life, he notes that he is married to a Jewish woman, and his father was in the Army during World War II and took part in the liberation of the concentration camps.

The show is a worthy venture that should be seen, especially by younger audiences.