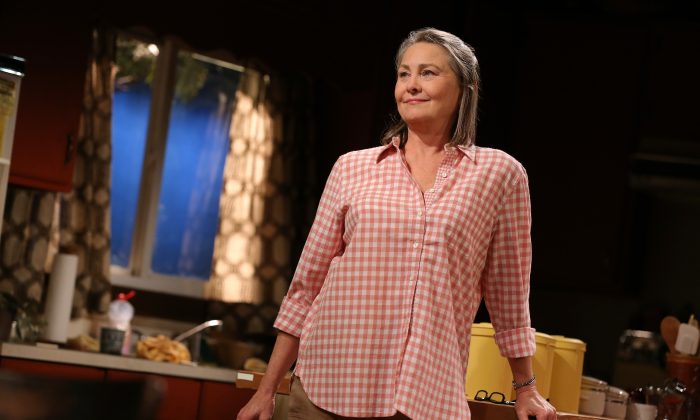 Cherry Jones as Agnes, a women’s shelter provider, in “When We Were Young and Unafraid.” (Joan Marcus)
Arts & Culture

Theater Review: ‘When We Were Young and Unafraid’

NEW YORK—On a remote island not far from Seattle, former nurse Agnes (Cherry Jones) runs a small bed-and-breakfast. It is actually a refuge where women escaping domestic violence can hide out while searching for a more permanent solution to their problem.

The times are pre-Roe v. Wade, and vulnerable women on the run are pretty much stuck.

Agnes lives with her daughter, Penny (Morgan Saylor), a teenager who is champing at the bit regarding greater freedoms—boys, for example—and what life may be like away from this limiting homestead.

Into their lives comes Mary Anne (Zoe Kazan), a tense, troubled, and obviously physically beaten young woman who is fleeing her abusive husband. Agnes tries to comfort Mary Anne and convince her that she is safe here, all the while stitching up a small gash on her face.

Agnes also impresses upon her that she must never contact her husband, because that would not be safe.

Mary Anne and Penny strike up a relationship, the older woman advising the naive Penny how to snag a boy for a prom date. Mary Anne’s tactics work, and Penny, now feeling her oats, goes a bit overboard to prove her newfound power. She goes out on a date and stays gone for a week. Of course, Agnes is beside herself.

An aggressive young black woman, Hannah (Cherise Boothe), has taken up residence, at first against Agnes’s wishes. But her willingness to work and her clearheadedness win Agnes over.

Hannah has come to the island to seek out a particular group of women, who spell women as womyn to indicate their scorn of the male gender. They are ultrafeminist, and Hannah takes a bit of time to explain feminism to Agnes and to the audience. (Some of this may explain the two-and-a-quarter-hour length of the play.)

Paul, a pleasant young man who has become a temporary resident, is drawn to Mary Anne and after a rocky start, appears to have hit it off with her. But she is in conflict; she cannot get her husband out of her mind and describes the fierceness and compelling nature of their physical relationship.

Because of Mary Anne’s feelings of ambiguity, she makes a bad slip, which may throw the whole unit’s safety into question. Fortunately, things right themselves, but not without bringing about a complete upheaval to everyone’s relationships.

Life will go on, but things will be different, with even the stern Agnes herself undergoing a sea change.

Under the minutely detailed direction of Pam MacKinnon, the entire cast performs as a well-practiced ensemble. Cherry Jones heads the group with solidity, but all the cast more than hold their own.

Cherise Boothe introduces a bit of spice in her portrayal; Zoe Kazan shows many colors of a confused young woman; Patch Darragh is an interesting, offbeat actor; Morgan Saylor, making her stage debut, conveys both the charm and feistiness of a young girl making her initial imprint upon her world.

The set by Scott Pask is particularly impressive, conveying the sense of an old, well-lived-in  dwelling, where people actually can bake muffins. Written by Sarah Treem, When We Were Young and Unafraid is an unusual, often compelling play.