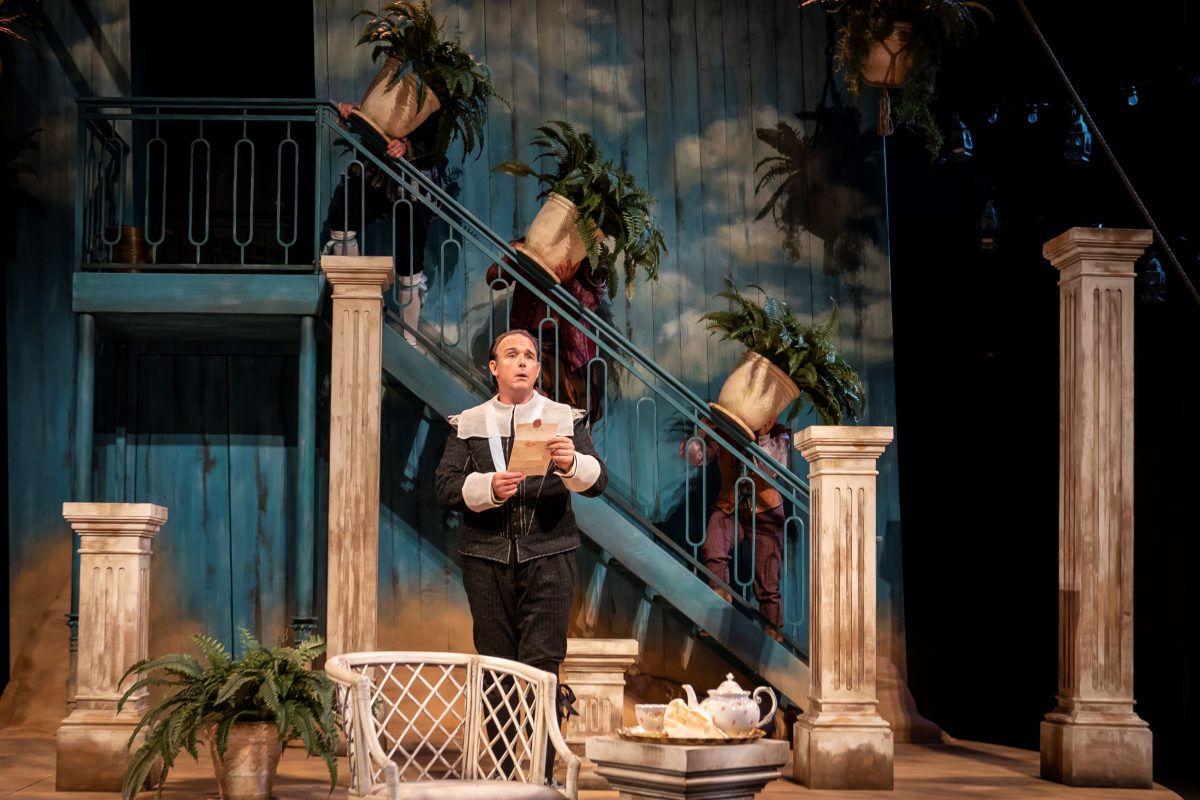 Paying for our foolishness with laughs
BY Sharon Kilarski TIMEJuly 12, 2019 PRINT

Named for the last feast night of the 12 days of Christmas, Twelfth Night was a carnival-like holiday during Renaissance times and was celebrated with general merriment and rule-breaking.

But despite its bacchanal mood and spirit of flouting authority, this play, like all traditional comedies, sticks to the original purpose of comedy: It makes us laugh at human foibles.

It Starts With a Shipwreck

The nearly identical twins Viola (Kelsey Brennan) and Sebastian (Michael Goldstein) survive a shipwreck off the coast of Illyria but, separated in the storm, each thinks the other is dead. Viola decides to dress as a man and find service as a page for the region’s ruler, Duke Orsino (Gavin Lawrence). She calls herself Cesario.

Duke Orsino is charmed by his new page and thinks that this fresh-faced youth with nary a sprout on “his” chin would be the perfect instrument to woo his beloved: the standoffish, beauteous Countess Olivia (Aila Peck). But there’s a catch: The countess will admit no suitors while she mourns the death of her brother.

Although Viola is now secretly in love with her new master, she—that is, Cesario—agrees to plead Orsino’s case. And through wit and persistence, Cesario not only gains admittance to Olivia, but the comely youth also wins the great lady’s heart—for Cesario himself, unfortunately, not for Orsino.

When Sebastian finally appears and finds that the lovely countess is enamored of him—she believes him to be Cesario—this love triangle sorts itself out.

Another plot revolves around the characters in Olivia’s household.

The countess has not only lost a brother of late; not long before that, her father had died. The house would fall into gloom if not for three characters in or buzzing around her household: her saucy chambermaid Maria (Colleen Madden), her foolish suitor Sir Andrew Aguecheek (Ted Deasy), and her rowdy, perpetually drunken uncle, Sir Toby (Triney Sandoval).

On this night, after Sir Toby carouses and cavorts with the dull-witted Sir Andrew, the pair begin caterwauling and “rouse the night owl.” Their revelry is disrupted by Olivia’s steward Malvolio (David Daniel), who threatens Sir Toby with his mistress’s displeasure: Toby will be put out of the house if he doesn’t mend his ways.

How can the revelers get back at the overly prim, proper, and supercilious Malvolio, who is always spoiling their fun? By taking advantage of his flawed character, of course! Malvolio gets his comeuppance in a most delicious way: Maria hatches a plot to write a letter (penned as though by Olivia’s hand) and plant it where Malvolio is sure to find it. In it, the lady admits her secret passion for someone unnamed. From certain hints in the letter, and given the steward’s high opinion of himself, he is sure to believe the lady’s feelings are for him.

Here it is—one of the funniest scenes in Shakespeare’s plays: Malvolio reading the letter. And Langs’s staging of it is priceless. There’s a hilarious dance with potted ferns as the schemers—Sir Andrew, Sir Toby, and a new accomplice, Fabian (Phoebe González)—duck behind the plants, moving them and moving themselves, all to better eavesdrop on Malvolio reading the letter.

Of course, Malvolio convinces himself that he is the one the countess loves and is quite overcome by the implications. Will he become a count? As the letter says, “Some are born great, some achieve greatness, and some have greatness thrust upon them.”

The letter also suggests that he adopt certain behaviors to further fan the lady’s fancies: to scold and abuse the others in the household, to smile continually, and to wear the current fad of cross-gartered stockings—bright yellow ones!

A runner-up to funniest scene comes with the further merriment that ensues when the steward takes all this advice. His acting on these instructions only serves to befuddle the countess, who thinks he is going mad. And when he is locked away for his own “safety,” his abusers have all the more fun with him.

Malvolio is not the only character who pays for his foolishness. What Sir Andrew Aguecheek lacks in brains, he makes up for in gullibility. Sir Toby eggs him on as a suitor to the countess, even though Aguecheek has no chance with the lady.

And, when it’s clear that the countess prefers the puppy Cesario, Toby riles cowardly Aguecheek into a ridiculous duel with Cesario. Toby convinces them each—the fool pretending to be valorous and the maiden pretending to be manly—of the other’s fury and prowess with a sword until each quakes in fear. Sir Andrew pays for his cheek, and Viola for her deceit.

There are repercussions for Viola’s charade. Not only must she hide her true feelings from Orsino, but she must also play a young man to the hilt—with the hilt. Alas, for her, but fun for us!

Bravo to the Cast

Standouts in the cast include Kelsey Brennan as Viola. We feel her heartfelt grief at the loss of her brother, enjoy her wordplay with the countess, and giggle at her swagger as a young man. During the sword fight, her faux swordplay set against her real screams brings howls of laughter.

Triney Sandoval’s a marvel as a man with an unquenchable appetite for drink. His booming voice gives his Sir Toby Belch a believable heartiness for all manner of merriment.

As for Sir Andrew Aguecheek, it would not be fair to say that half of Ted Deasy’s appeal comes from his tall, pale, lanky self, adorned with long, platinum blond hair, and blue and silver pantaloons, yet his appearance is certainly memorable! (Thank you, Jenny Mannis for all the excellent costume work.) Deasy’s kicks and capers, his inability to hide his height behind a potted fern, and his mad dashes into battle to steel himself against a foe half his size—all brilliant.

David Daniel’s work as Malvolio is masterful. In the scene when he appears resplendent in canary yellow—his doublet, pantaloons, and socks (again, thank you, Ms. Mannis)—his simpering smile, which is more of a pinched pucker, complements his mincing steps and poses to show off to best effect his calves encased in yellow.

Despite its modern color-blind casting, the whole performance—from the rounded tones of the actors’ vowels, to the Elizabethan-ish garb, to the use of just the actors and a few props to tell the story—feels fairly traditional. But not everything in Langs’s production works. Certain elements have a modern ring to them that don’t quite mesh with the overall effect. For example, Aila Peck’s Countess Olivia lacks some of the dignity required of her position, which would make her transition to a lovesick maid all the funnier. Also, the mannerisms and movements of the fool Feste (La Shawn Banks) seem all too, well, contemporary.

Lastly, Langs chooses to close the show with some modern ambivalence. A couple of the characters are dispirited at the play’s end, notably Sir Andrew, who, placed front and center, sits with a mopey face. Yes, he has not won the lady and might be momentarily sad, but he’s also slow of wit; it seems out of place for him to dwell on his misfortune, and it risks the audience’s leaving in a less-than-festive mood.

Overall, though, Langs is true to comedy’s purpose: Characters’ faults come round to bite them, and we delight in that. Furthermore, as these faults are paraded before us, we become aware of and laugh at our common foolishness.