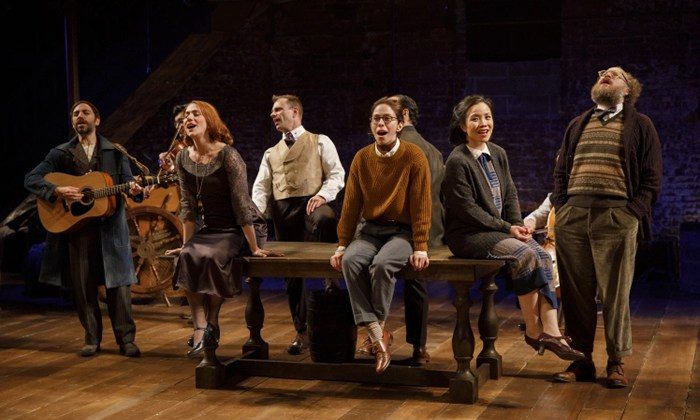 The cast of Fiasco Theater’s production of “Twelfth Night, or What You Will.” (Joan Marcus)
Performing Arts

Theater Review: ‘Twelfth Night, or What You Will’

NEW YORK—Fiasco Theater has taken up residence at the Classic Stage Company to produce what many consider to be Shakespeare’s greatest comedy: “Twelfth Night.”

The production is light and lively, with many fine performances and offers many pluses; however, it lacks one particular element which prevents it from being the superlative production it might have been. More on that later.

The play opens with a shipwreck. Young Viola (an appealing Emily Young) is thrown ashore in a strange land. She learns it is called Illyria. But she is heartbroken because her twin brother, Sebastian (Javier Ignacio), who had also been on board, is nowhere to be found. She fears he may have drowned.

With the aid of the ship’s captain she disguises herself as a boy (women must never go about alone) and finds employment and protection as a page to the elegant Duke Orsino (Noah Brody, also co-director of the production and co-artistic director of Fiasco Theater).

Orsino assigns Viola, who now calls herself Cesario, to call upon his adored Countess Olivia (Jessie Austrian, co-artistic director of Fiasco) and plead his love for her. Olivia, however, will have none of Orsino, or any other man, as she is in mourning for her deceased father and brother.

How odd, therefore, that Olivia falls head over heels for Cesario/Viola, whom she takes to be a young man. But as luck, or love, would have it, Viola has become smitten with Duke Orsino. When alone, Viola exclaims, “How will this fadge? [succeed]… Time must untangle this, not I. ‘Tis too hard a knot for me to untie.”

Time brings about all number of complexities and hijinks. Olivia’s bellicose, aggressive, and almost-never sober uncle, Sir Toby Belch (Andy Grotelueschen), who is enamored of Olivia’s lady-in-waiting, Maria (Tina Chilip), devises a plot with her and hanger-on Sir Andrew Aguecheek (Paco Tolson). He wants to trick Olivia’s steward Malvolio (Paul Coffey), who longs for Olivia, into making a fool of himself in her eyes and thus clear the way for Aguecheek himself to plead his case for her heart.

How will this fadge indeed?

The scene with Malvolio ridiculously attired in yellow, a color Olivia detests, has its desired effect. But Aguecheek doesn’t get a second look from Olivia.

Feste, the clown (Ben Steinfeld, co-director) surveys all the events, makes shrewd comments, and sings with a fine voice, accompanying himself beautifully on guitar. Antonio (David Samuel), Sebastian’s friend, rounds out the cast.

John Doyle’s set (he is also artistic director of Classic Stage Company) is dark, pared down, and very effective. A simple table, trunk, and a disturbingly high ladder, which is climbed by various cast members, are all this production requires. The mixed-period costumes by Emily Rebholz serve to highlight the production’s any time, anywhere quality.

What’s missing, then? Heart and soul.

No one can supply these better than William Shakespeare, who, let us not forget, was a poet. A great poet.

Who can resist “If music be the food of love, give me excess of it…”

Who can fail to feel a tinge of sadness when Viola declares: “She never told her love, but let concealment like a worm in th’ bud Feed on her damask cheek…”

I’m sure these lines were all spoken in the performance, but I barely heard them as they fled by so quickly and with equal emphasis on the more prosaic prose utterances. More emphasis on the poetry might have lent greater variety to the play, as well as a sense of greater depth. One experiences poetry on a different emotional level than prose.

The play is about unrequited love, affecting the major characters. The sad state has affected many, if not most, of us at one time or another. And, there is grief at the loss or believed loss of a loved one.

Because the story ends happily, it is a comedy, yes, but more stress on the characters’ tensions and more emphasis on the poetry might have served the production better.

As a majority of the players are members of the Fiasco Company or have worked with it before, one gets a strong sense of the repertory quality of the performance, which is a pleasure to see.

This “Twelfth Night” marks a feather in the cap of the company, which has received plaudits and awards for past productions of “Cymbeline,” “Into the Woods,’ “Measure for Measure,” and others.