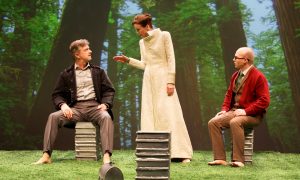 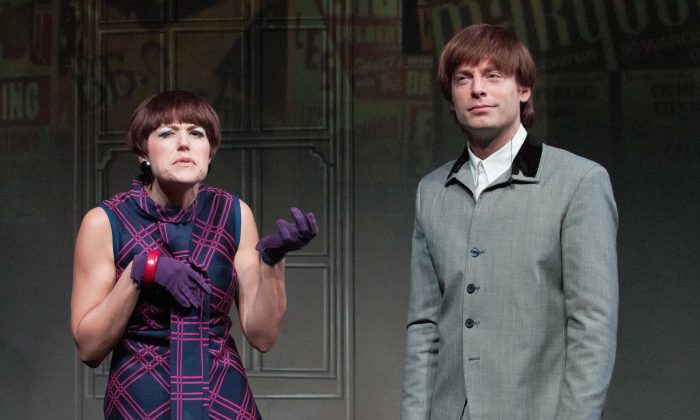 Bea (Nicole Parker) and Ben (Justin Kirk) (the Beatrice and Benedick roles in Shakespeare’s “Much Ado About Nothing”) in the new comedy “These Paper Bullets!” (Ahron Foster)
Arts & Culture

NEW YORK—Over the years, the works of William Shakespeare have been transposed, transplanted, and transported into more settings, eras, and situations than one can count. The latest effort is the very enjoyable “These Paper Bullets!” which uses the Bard’s comedy “Much Ado About Nothing” as a template.

Writer Rolin Jones has moved the setting to 1964 London, adding in more than a little history of the Beatles for a very trippy journey. Billie Joe Armstrong provides the songs for this off-Broadway presentation by the Atlantic Theater Company.

The cast and creative team have done an excellent job in recreating the feeling of the 1960s.

Taking the musical world by storm are four lads from Liverpool, the Quartos: Ben (Justin Kirk), Claude (Bryan Fenkart), Balth (Lucas Papaelias), and Pedro (James Barry). Turning out one hit after another, the group has just completed a successful American tour, returning to London for a hero’s welcome. Their return is complete with mobs of fans, relentless paparazzi, and a seemingly endless supply of lady’s knickers from their adoring female public.

However, the group’s former drummer, Don Best (Adam O’Byrne), who was replaced by Pedro just before the Quarto’s rise to the top began, has long harbored a grudge against the lads. They didn’t have the guts to fire him face to face.

As an act of payback, Don, who’s been kept on by the group as a gopher, plans to sabotage the whirlwind romance and upcoming marriage between Claude and Higgy (Ariana Venturi), a high-profile fashion model and daughter of Leo Messina (Stephen DeRosa). Messina owns the London hotel where much of the story takes place.

To help him in his scheme, Don has sleazy photographer Boris (Andrew Musselman) work some darkroom magic and create compromising pictures of Higgy, which are sure to cause Claude to call off the nuptials.

Meanwhile, Ben, the defacto leader of the group and a bit of a womanizing scoundrel, pooh-poohs Claude’s love. In response, Messina and the rest of the band plot to make Ben fall in love with Higgy’s cousin Bea (Nicole Parker), a top fashion designer. The guys are aided in their attempt by Higgy and her friends.

While insults rather than romance is usually the common language between Ben and Bea, the two being old acquaintances, the line between disdain and love soon becomes thin. This unfolds in several hilarious sequences—particularly by Parker as Bea, who desperately tries not to be seen by those she overhears.

Just as with Shakespeare, there are more than a few moral lessons tucked inside the story Jones has crafted. The life of a rock star or free spirit may indeed be fun, but it cannot hold a candle to true love and all that goes with it.

In the end, the boys realize how truly selfish they’ve all been—often leaving havoc in their wake and having others clear up their mess. Ben, for example, does more than a bit of emotional growing up by the tale’s end.

A subplot presents an enjoyable take on an “us versus them” mentality. Greg Stuhr offers a hilarious performance as Mr. Berry, the leader of a group of British agents spying on the Quartos, who are seen as a danger to society. The agents attempt to discern a supposed hidden message in the Quartos music when their records are played backward.

The cast and creative team have done an excellent job in recreating the feeling of the 1960s or at least a very enjoyable parody of that time. A running gag throughout is a picture of Queen Elizabeth that keeps falling on its side. Both the picture and the show offer a worldview slightly and comically askew from reality.

The life of a rock star or free spirit may indeed be fun, but it cannot hold a candle to true love.

There’s also a nice use of Shakespearean dialogue throughout. The cast effortlessly switches from 1960s vernacular to words of the Bard and back again.

Armstrong’s songs nicely capture the feeling of actual tunes performed by the Beatles.

The entire cast is quite good in their respective roles, particularly Parker and Kirk as Bea and Ben. The two actors have a strong chemistry in their scenes together and their characters’ somewhat more worldly back stories provide a counterpoint to Claude and Higgy’s more innocent relationship.

This is not to say the show is perfect. The entire subplot concerning the British undercover agents, while satirical, really isn’t needed; and the ending is more than a bit cliché. Still, all in all, “These Paper Bullets!” (the title taken from a line in “Much Ado About Nothing”) offers a very enjoyable melding of the mod with the Bard and makes for a groovy experience forsooth.