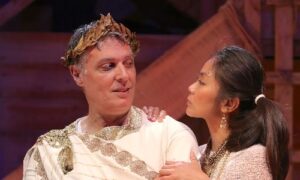 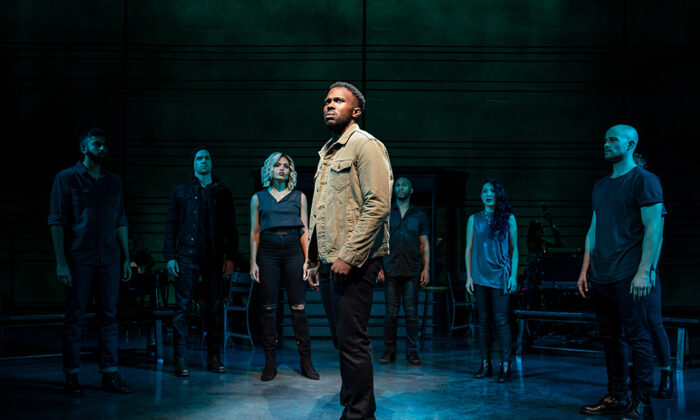 NEW YORK—Though billed as a musical, “The Wrong Man” features completely sung rather than spoken words. Does this make it an opera? No, no, no! There’s not a whiff of Puccini or Verdi.

The story—of an ordinary man who encounters bad luck—is its own thing, under the banner of pop music composer Ross Golan, who wrote the book, music, and lyrics. Golan’s background includes the 2016 BMI Pop Songwriter of the Year award. He has also served as writer of songs for the likes of Ariana Grande, Selena Gomez, Justin Bieber, and other high achievers.

Obviously a labor of love for Golan, this current work has been on the drawing board for more than 10 years, appearing as a concept album last summer and as an animated film at the Tribeca Film Festival.

In this production, the jewel in the crown is the masterful actor and singer Joshua Henry (nominated for a Tony and Grammy for the recent revival of “Carousel” on Broadway), who carries the show on his shoulders.

Henry creates a tangible character as Duran, a ne’er-do-well living in Reno, who falls for a married woman, Mariana (Ciara Renée). Unfortunately, her husband, a convicted criminal known only as Man in Black (Ryan Vasquez), is incredibly jealous—so much so that he murders Mariana and another man, and pins the crimes on Duran.

Duran is arrested and spends the remainder of the show insisting that he’s “the wrong man.”

Golan has surrounded himself with a support team of prestigious specialists: Director Thomas Kail with his Tony award-winning stint of “Hamilton” is reunited with Alex Lacamoire, another Tony winner for “Hamilton,” who here is responsible for music supervision, arrangements, and orchestrations.

However, the songs are repetitive. Although, as noted, there are remarkable pedigrees here, the script isn’t strong and the language of the lyrics is rather pedestrian. How many times can one say: “I’m the wrong man”?

There’s a divergence of opinion regarding the quality of the production. One reviewer has concluded: “Their hardworking efforts aren’t enough to make ‘The Wrong Man’ feel like more than a dramatically inert song cycle.”

But another reviewer has written: “[the] exquisite harmony of this unusual show” and “immersive theater with great music.”

And, as mentioned earlier, performer Joshua Henry makes it all worthwhile for many.

That’s what makes the ballgame of theater. Certainly, audiences enjoy it. I attended a Wednesday matinee, and the house was packed.