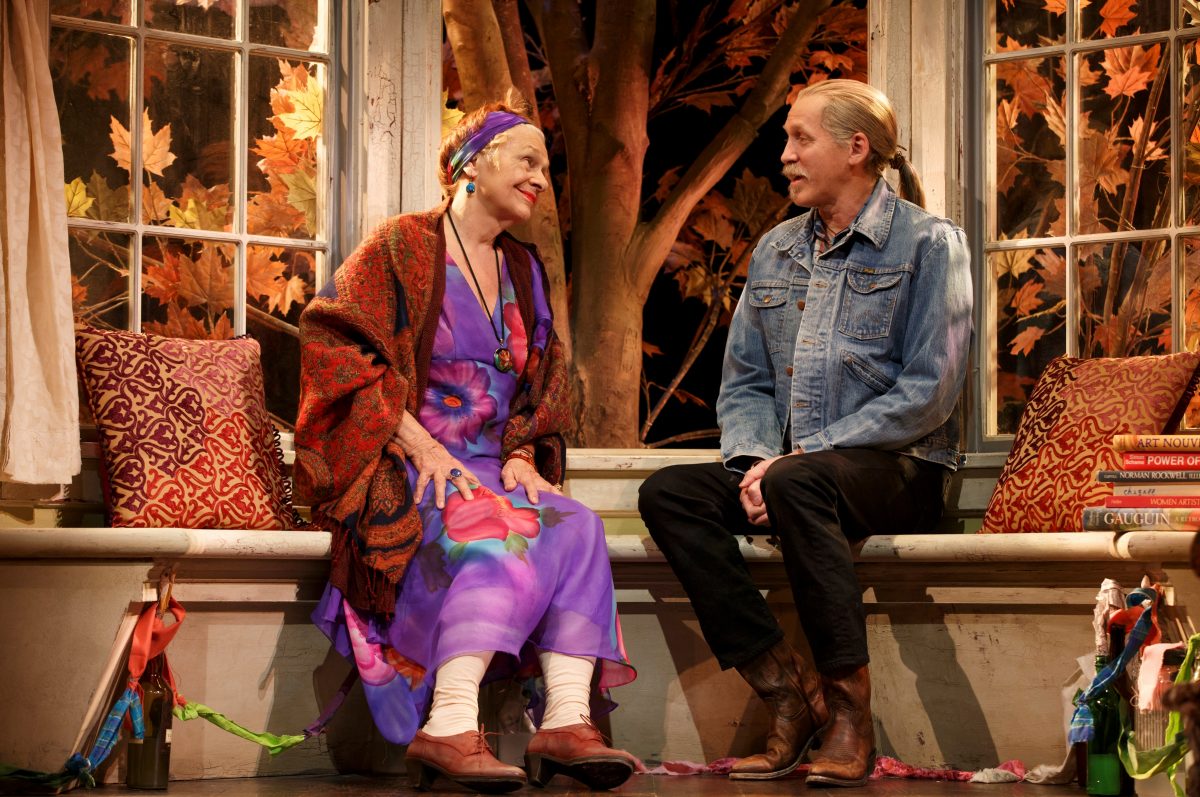 Theater Review: ‘The Velocity of Autumn’

NEW YORK—This both funny and poignant two-hander by Eric Coble dealt with aging and what to do about it, in the person of feisty 79-year-old Alexandra, played by the equally feisty Estelle Parsons, reputed to be older than that. Parsons’s partner in this adventure was Stephen Spinella, playing Alexandra’s youngest son, Chris.

Chris, long separated from his mom by both time and distance, has returned to Alexandra’s attractive Brooklyn brownstone to persuade her to enter a nursing home, at the behest of his two older (unseen) siblings.

Inasmuch as Alexandra has barricaded her door and will brook no interference by anyone, Chris must enter via the imposing, gorgeous tree that fronts the house’s expansive window (courtesy set designer Eugene Lee.)

Alexandra is well armed with Molotov cocktails and threatens to blow up anyone who threatens her way of life.

Independence is all to the determined woman, even though she angrily admits that her body is failing. An artist, her mobility limitations prevent her from visiting her beloved New York art museums.

In fact, Chris notes, she has removed her own paintings which once lined the walls here in her home. It is as if she is relinquishing her old way of life. But in spite of everything, she insists she wants to die in her own home when that time comes.

The heart of the play consists mostly of talk of their earlier days together. Alexandra has enjoyed being a mother to all her children, she says, but nevertheless looked forward to their leaving for school so that she could be alone.

Chris’ attitude toward his “assignment” seems to waver a good deal until he recounts a recent incident where he had been present at a dreadful biking accident and had done nothing to intervene. It’s implied that his failure to help now leads him to think that his mother could be best served by being under someone else’s care.  However, the play’s ending is ambiguous.

Coble’s play dwells on the indignities and frustrations of old age, particularly with those who are especially independent and private people. Not everyone is suited to the nursing home route.

Following a successful run at Washington, D.C.’s noted Arena Stage where it was directed by the Arena’s artistic director Molly Smith, who directed it here, the play was perhaps a bit “light” for Broadway tastes, especially when considering that much of Broadway is supported by the business crowd with company charge accounts.

But the Oscar-winning Ms. Parsons and two-time Tony award winner Spinella gave the 90-minute production its full due.