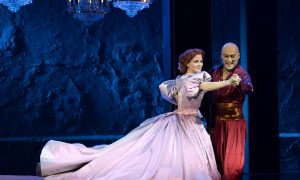 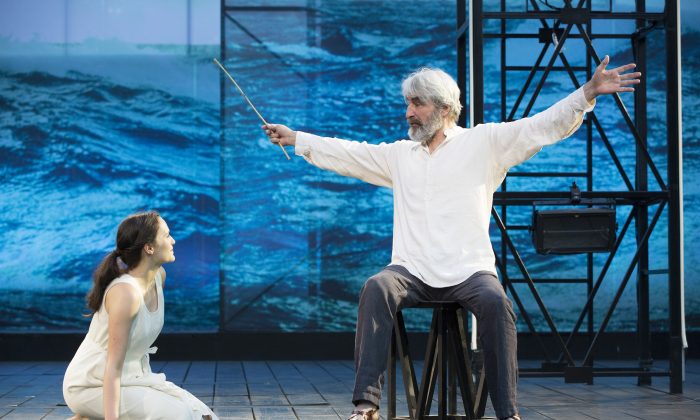 Miranda (Francesca Carpanini) listens to her father, Prospero (Sam Waterston), the master of the island, in “The Tempest.” The Public Theater Free Shakespeare in the Park production was directed by Michael Greif. (Joan Marcus)
Arts & Culture

When forgiveness is the best revenge
By Judd Hollander
biggersmaller
Print

NEW YORK—It’s been said that revenge is a dish best served cold, and indeed literature is full of tales of the unjustly wronged exacting vengeance against those responsible. “The Count of Monte Cristo” is perhaps the best example. However, just as important as the need for revenge is finding the ability within oneself to move beyond it. William Shakespeare forcefully makes this point in “The Tempest,” currently playing under the stars at the Delacorte Theater in New York City’s Central Park.

Miraculously surviving a gigantic storm that swept down upon their fleet, the King of Milan, Alonso (Charles Parnell); the Duke of Milan, Antonio (Cotter Smith); and most of their party find themselves washed ashore on a mysterious island. Coming ashore elsewhere on the island is the king’s son, Ferdinand (Rodney Richardson).

The storm is the doing of Ariel (Chris Perfetti), a mysterious spirit under the command of Prospero (Sam Waterston), Antonio’s brother and the true duke of Milan. Twelve years earlier, Prospero, far more interested in the studies of the magical arts than the responsibilities of his office, basically turned over the running of his dukedom to Antonio.

The danger of those not able to forgive is that they become so filled with rage they threaten to become just like those who first wronged them.
Antonio then proceeded, with at least the complicit approval of Alonso, to usurp his brother’s rule and force him into exile, along with Prospero’s young daughter, Miranda (Francesca Carpanini).

The two were left adrift at sea and eventually found themselves on this selfsame island. Prospero used his powers to control the various inhabitants they found there. These include the ethereal Ariel and the brutish and somewhat misshapen Caliban (Louis Cancelmi), who believes the island should belong to him.

Yet while Prospero could easily use the magical arts and the beings that now serve him to completely destroy those who wronged him, he has a different objective in mind: to make his former tormentors see the error of their ways and thus restore his lands and title. With the help of Ariel, who is promised his freedom should this plan succeed, Prospero attempts to achieve these ends.

One of the last plays Shakespeare wrote, “The Tempest” is usually grouped by scholars into what is called the Bard’s “romance period.” Here he visits the topics of redemption, usually achieved by the making right of past misdeeds, and of forgiveness.

The danger of those not able to forgive is that they become so filled with rage they threaten to become just like those who first wronged them. Rage is shown in Prospero’s initial treatment of Ferdinand and the ongoing punishment of Caliban. In fact, Prospero afflicts Caliban with pain whenever he becomes disobedient.

True, Caliban once threatened to impregnate Miranda, but Prospero’s methods in their master-slave relationship still come off as a sort of continual torture, whereas exile, imprisonment, or even a quick death would seem more merciful.

The title of the play refers not only to the storm that begins the story, but also the turmoil Prospero, Caliban, and several others feel at being wronged, which threatens to destroy them.

A frequent problem with producing “The Tempest” is that the story often overwhelms the characters. This is precisely the case here. Many of the supporting cast come off as one-dimensional and in some cases interchangeable, and thus it’s hard to care about their fates. This includes both Ferdinand and Miranda’s budding romance as well as a plot by Antonio to entice the king’s brother, Sebastian (Frank Harts), to slay his sibling and put himself on the throne.

The only time this lack of depth works is when Caliban encounters two other survivors from the king’s ship, Trincoluo (Jesse Tyler Ferguson) and Stephano (Danny Mastrogiorgio). The three, after some strong drink, conspire to kill Prospero and take over the island. These sequences are played mostly for laughs. Mastrogiorgio, in particular, reminds one of a sort of highbrow gangster with his speech and mannerisms.

A pleasant if not a sterling production.
Waterston makes a convincing Prospero if not an exciting one.

Although his words take on a monotone quality at times, which can make some of his more lengthy speeches a bit wearying (when describing his back story, for example), he does, however, get in some good moments. In particular, he shines in humorous situations—such as when, after giving his blessing to Fernando and Miranda’s union, he proceeds to threaten the prospective groom with unspeakable torments should Fernando take his pleasure with Miranda before the benefit of marriage.

Perfetti also does well as the quietly passionate Ariel.

Theater Review: ‘The King and I’
A pleasant if not a sterling production, there is much to enjoy and observe about the human condition in “The Tempest,” particularly the healing power of forgiveness for those who are able to let go of their hatred, and for those who cannot, its crippling effects.