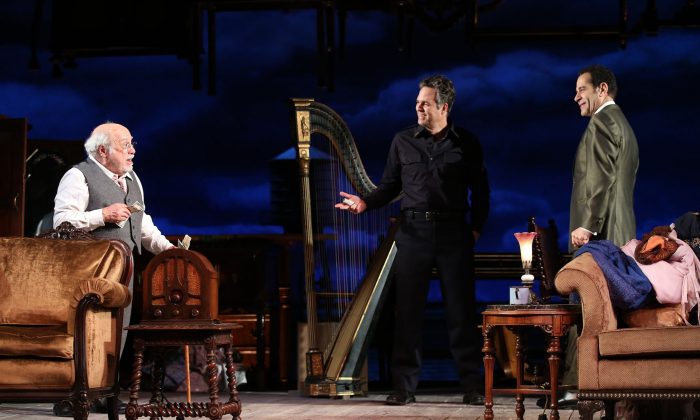 (L–R) Gregory Solomon (Danny DeVito), a furniture dealer, is appraising the inherited belongings of brothers Victor (Mark Ruffalo) and Walter Franz (Tony Shalhoub) after the death of their parents, in “The Price.” (Joan Marcus)
Arts & Culture

NEW YORK—We’re greeted by a helter-skeltery New York apartment, maybe an attic, with a conglomeration of banged-up chairs and other decrepit furniture filling the space and hanging from the ceiling.

Victor Franz (Mark Ruffalo), a cop by the looks of his uniform, is looking through it all. He turns on an old Victrola, and it plays a recording of somebody laughing. He’s soon joined by his wife Esther (Jessica Hecht), who’s looking spiffy in a pink suit.

They’re about to make a deal to sell all the stuff, which is the property of Victor’s late parents.

Is a successful career enough to make a man happy?

But in the hands of playwright Arthur Miller, the champion of Everyman, it’s not going to be a simple, cut-and-dried project. Victor has reached retirement age; he’s trying to decide whether to continue with the NYPD or to look elsewhere for a new career or line of work. And there are other conflicts.

Enter Gregory Solomon (Danny DeVito), an antiques dealer Victor has called in to make them an offer. Loquacious and cheerful, Solomon takes his time in making seemingly idle chatter while he looks around the place, deciding how he can come up with a good deal—for himself. He does take note of a once elegant harp, commenting that the frame is cracked.

Victor has the look of a man who’s been pounding the beat for a very long time, and he’s tired. Irritable, in fact. He comments to Esther that he will pay half of the proceeds to his brother Walter, though they’ve not spoken in years. Walter has not even bothered to return Victor’s recent phone calls regarding the impending sale. Victor obviously bears a bitterness toward Walter.

But quite unexpectedly, Walter (Tony Shalhoub) appears. Sporting a fine camel hair coat, he’s been very successful in his career as a surgeon. He comments, regarding the cost of the coat, “a couple of gallstones,” and shrugs impassively.

With Walter now present, the buried subtext between the brothers churns to the surface. Walter was able to become successful because he was free to get an education. Victor, on the other hand, gave up such an opportunity when he stayed home to care for their sick father. It was during the Great Depression and money was scarce.

Solomon, aware of the tension in the air, breaks in occasionally to lighten up the proceedings. It later comes out that the 89-year-old dealer had crises of his own in life, but he chose to overcome them and move on.

Esther acts as a kind of referee and peacemaker. She’d like things to go smoothly and wishes Victor and Walter could make peace. There’s also a mild flirtation between her and Walter, which softens the proceedings.

But a confrontation between the two brothers brings the nitty-gritty out into the open: the price. When it comes out later that the brothers’ father actually did have a little money set aside, but hidden, Victor is devastated. Did he pay too high a price by giving up the chance to better himself? Has he wasted his whole life?

Victor feels that Walter paid nothing. Or did he? Walter’s marriage has failed. Is a successful career enough to make a man happy? Victor has a successful marriage, at least.

But Solomon’s story perhaps throws a light on everything. No matter what, he survives. He did not allow the tragedy in his life to defeat him. So perhaps, it’s how one looks at things that determines one’s attitude in life.

At the end, Solomon is left alone onstage. He turns on the Victrola recording of laughter. Is playwright Miller saying that one should laugh at life’s problems? Or that, no matter what choices we think we’re making, it’s all out of our hands?

Theater Review: ‘If I Forget’

The team of four players does impressive work, under the perceptive direction of Steppenwolf Theatre co-founder Terry Kinney. Ruffalo’s Victor clearly expresses the disappointment of a man who feels he’s been cheated. Shalhoub’s outer bluff conceals the shame of a man who has perhaps finally admitted he took advantage of a situation. Hecht makes the most of her role, bringing complexity to a character that has been written to be somewhat subservient. DeVito’s high energy lightens what otherwise would have been a somber presentation.

The play may not be as clear-cut as Miller’s other works: It’s hard to surpass “Death of a Salesman,” “The Crucible,” “All My Sons,” and “A View From the Bridge.” But “The Price,” like all of his works, is imbued with richness and humanity. As the character Linda Loman says in “Salesman,” “Attention must be paid.”