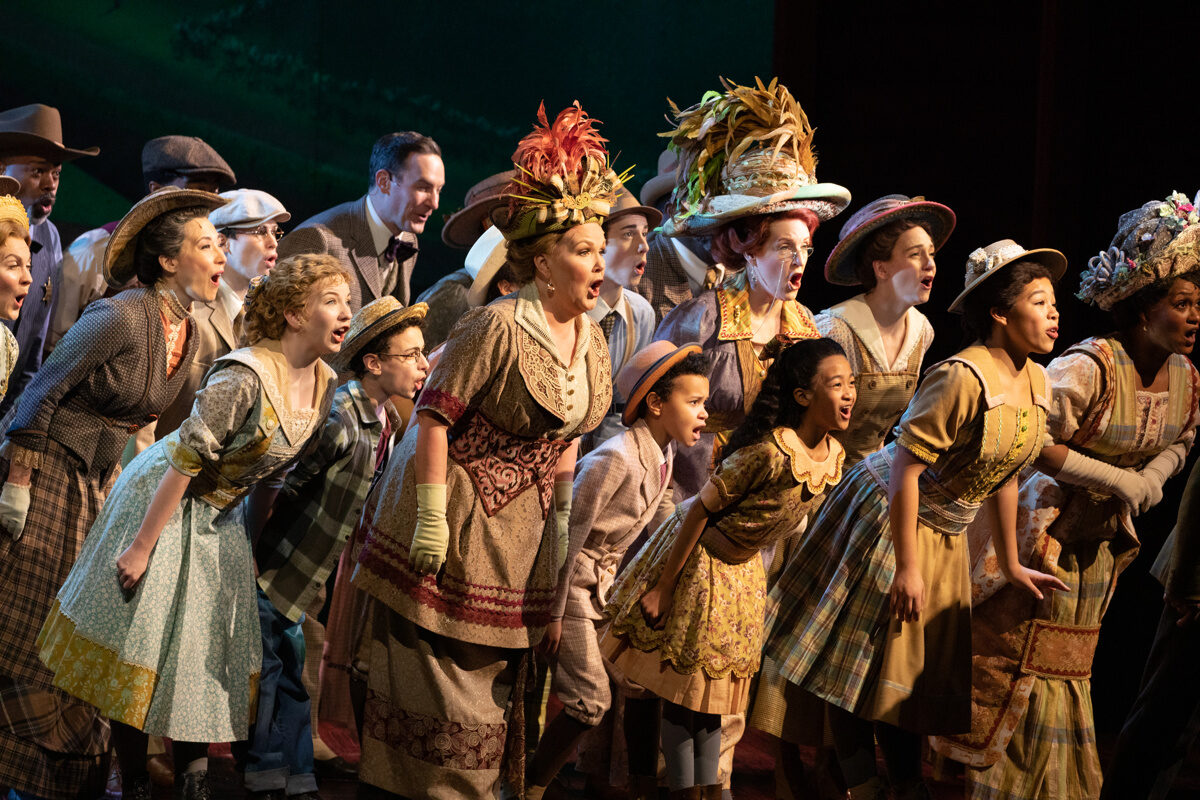 Here in New York, in its fourth incarnation since it originally played on Broadway in 1957, Meredith Willson’s slice of musical Americana does not fail to please. Willson wrote book, lyrics and music, and collaborated on the story with Franklin Lacey.

Helmed by director Jerry Zaks, whose pedigree includes a super production of “Hello, Dolly” some seasons back, the musical gives audiences a masterful coordination of performers, sets, costumes, and music.

The setting is the fictitious River City, Iowa, in the more innocent times of the pre-1920s.

The show opens in a sumptuous train car of the time, trimmed with rich mahogany and luscious green velvet, courtesy of veteran designer Santo Loquasto, who also created the vivid costumes.

Here a group of traveling salesmen, led by Remy Auberjonois, jiggle in time to the rhythmic beat of the train’s rattle. The men’s talk turns to mention of the charlatan, “Professor” Harold Hill, who always turns up where he shouldn’t, and who gives their noble profession a bad name.

Well, whadda you know? At scene’s end Hill, in the person of charismatic song-and-dance man Hugh Jackman, appears. He has come to River City to convince the citizens that he can eliminate from the younger set the evils of cigarettes and gambling at the pool hall by buying from him an array of musical band instruments and appropriate uniforms. Furthermore, he will train the hitherto nonmusical young people in the use thereof. He, Hill, will create a marching band! Can the rousing “Seventy-Six Trombones” be far behind?

Well, actually it is. First, we hear “Ya Got Trouble.” Hill works on ingratiating himself with stuffy Mayor Shinn (Jefferson Mays) and his wife Eulalie Shinn (played to the high rafters in Jayne Houdyshell’s effervescent performance; and how she struts about in Loquasto’s unreal plumed and feathered costumes!)

We are treated to a bubbling, energetic group of young dancers, showing off Warren Carlyle’s superior choreography, which fuses Broadway showbiz to the thrilling tours-jetes of classical ballet. And what a company! New York arguably supplies the best of the best, of technically proficient and spirited dancers.

Hill happens to run into Marian Paroo, the librarian, played by Sutton Foster. Hill appears to be smitten. She, on the other hand, gives him the cold shoulder having heard about his nefarious behavior. Marian’s mother, the lovely Marie Mullen (remembered for her Tony-winning stint in Martin McDonagh’s “The Beauty Queen of Leenane” some seasons ago) chides Marian for her coolness. Incidentally, the cast features a slew of Tony winners, too numerous to list here.

Also present in Marian’s household is her shy kid brother, Winthrop Paroo, played to a T by young Benjamin Pajak. A real find, he never misses a beat as he chimes in on “Gary, Indiana.” Marian later warbles “Till There Was You” and “Goodnight My Someone,” and her feelings toward Hill appear to soften, especially when he displays real interest in helping Winthrop overcome his shyness.

Things are a bit tough for Hill getting his way with the townsfolk, especially because Mayor Shinn runs the local poolhall. But ultimately, we witness “Seventy-Six Trombones,” the town youth attired snazzily, instruments in hand, and young Winthrop happily blowing on a cornet.

Hugh Jackman readily takes stage with a mix of charm and theatrical smarts, easily winning over the audience. He’s an excellent actor and a terrific dancer who matches moves with the young chorus folks.

Sutton Foster does a nice slide from stern lady to a smitten young thing. I would have loved to see her tap dance, a skill for which she is noted; that activity does appear briefly in the enthusiastic curtain call, where she pairs with Jackman in a brief tapping sortie.

The production melds Broadway pizazz with Middle America’s nostalgic past. And so many tuneful songs! Not a bad way to spend a cold winter evening, or one of the afternoon matinees, and it’s for the whole family. Bring the kids, they’ll love it.