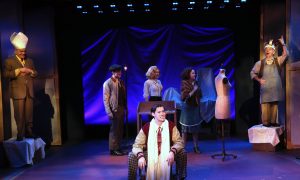 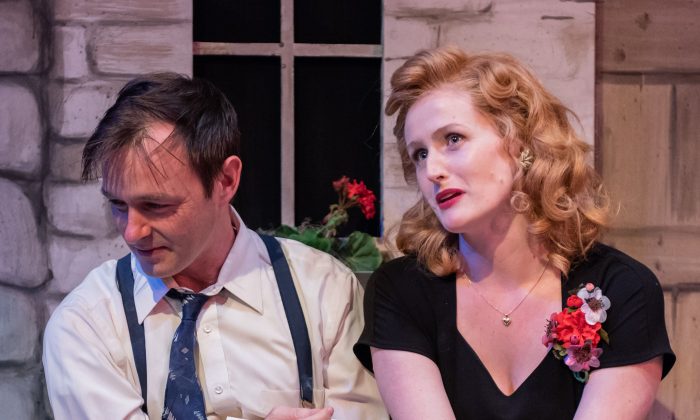 An attempt to escape one’s past
By Diana Barth

NEW YORK—“The Mountains Look Different” presents a look at the farming class of a rural place not far from the metropolis of Dublin.

This particular farm is owned by Martin Grealish (Con Horgan), a domineering, smug man who is used to having things his way. He is paid a visit by Matthew Conroy (Paul O’Brien), who is the uncle of a young woman, Bairbre (Brenda Meaney), who has recently married Grealish’s son.

Conroy means to pave the way for Bairbre’s imminent arrival, assuring Grealish that Bairbre, who has spent the last 13 years in London, is a fine young woman and will make a fine wife for the son, Tom (Jesse Pennington).

When the couple arrives, Grealish has gone inside, and Bairbre refuses to enter the house until she has been invited. She is unsure of herself, and desperate to make a favorable impression on her husband’s father. She does her best to appear demure, but somehow her inner vivacity and worldly experience peek through.

When Mr. Grealish finally appears, he registers shock on seeing Bairbre and tells her she must leave the next day.

There begins a series of painful cat-and-mouse encounters between the two, which ultimately reveal that Bairbre’s life in London had been less than pristine. The necessity to simply survive had brought her to do things she now regrets. And, through odd events, Grealish, a hypocritical moralist, knows it.

Here Micheal Mac Liammoir’s work proves itself to be a kind of morality play, taking it beyond the realm of fiction and pointing out the difficult role of women in former times, and even in some places today. With few opportunities for a woman to be self-supporting, and not many career opportunities, the best a good woman could do was to find a good man.

Bairbre has done just that, but tragic circumstances bring about her failure.

But the weight of the play is carried by the trio of Brenda Meaney, who creates a vivid character in the demanding role of Bairbre, Con Horgan’s overbearing Martin Grealish, and Jesse Pennington’s sometimes clueless but loving Tom.

Playwright Mac Liammoir was an icon of Irish theater; he was described by the Irish Times as “the dominant figure in the Irish theatrical world for almost half a century.”

He was co-founder, with Hilton Edwards, of the famed Gate Theatre in Dublin (where I had the privilege of seeing Sebastian Barry’s “The Steward of Christendom,” with the inimitable Donal McCann, some years ago).

“The Mountains Look Different” is very dark but compelling.