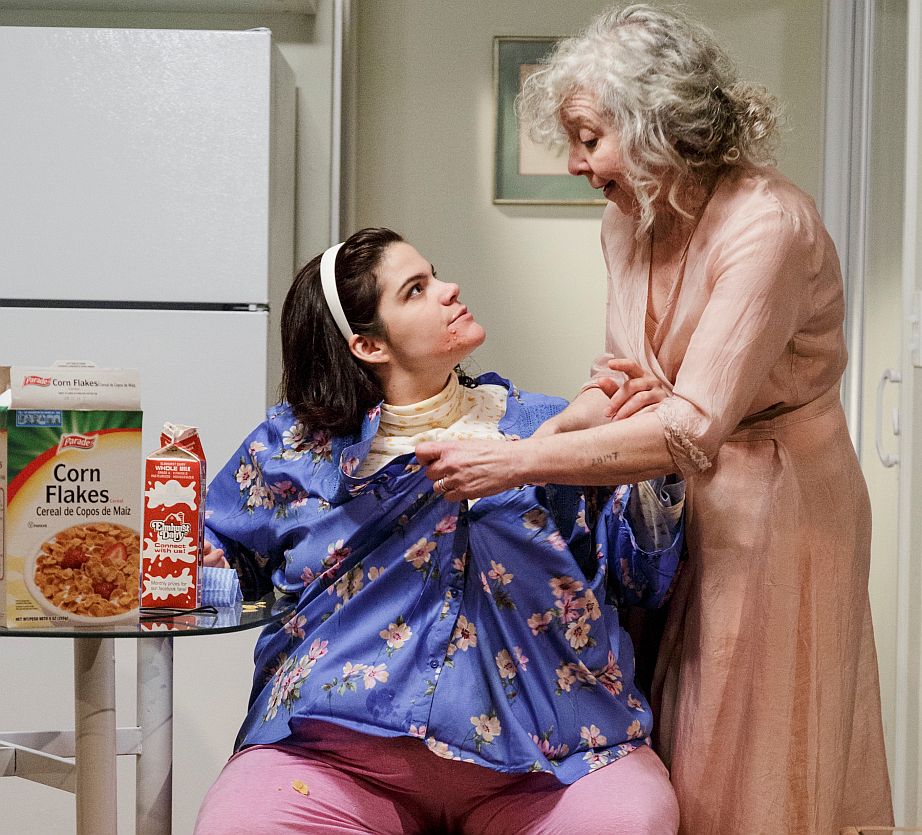 NEW YORK—When an elderly couple flees the cold winter of Brooklyn, New York, to find solace and retirement in sunny Florida, they find that the model apartment where they must spend “a few nights” awaiting completion of their own unit is not to their liking. The TV set is an empty box, the fridge plug cord has been clipped off, an ashtray is glued to a table. So begins Donald Margulies’s odd, funny, and haunting, dark play.

Lola (Kathryn Grody) and hubby Max (Mark Blum) are seeking to escape more than just a bad climate. Back in New York they have a daughter, Debby (Diane Davis), who is so grotesque she might even be labeled a “grotesque.” To call her obese would be an understatement. Furthermore, she is mentally more than a little unhinged.

As ill luck would have it, Debby finds her way to her parents via a talkative neighbor who knew their whereabouts. To add insult to injury, Debby has in tow Neil (Hubert Point–Du Jour), a young African-American man whom she met somewhere on a New York street and is “in love” with.

By now Lola and Max are ready for a true escape, far from their offspring and her newfound friend. But that is not to be. Here the play takes on newfound complexities. It comes out that the older pair are refugees from Nazi Europe; Lola bears a tattooed number on her arm.

The pain of their earlier life erupts in emotional scars, particularly apparent on Max’s psyche. Visions of another daughter, Deborah, who died in the Holocaust, appear in Max’s sleep. Deborah is lithe, delicate, and sensitive, the polar opposite of Debby.

Lola too has peculiar visions. She insists that in Europe she had been an intimate friend of Anne Frank and knew of the diary that Anne was writing.

Conflict surges to the surface, as Debby rages against her father’s critical assessment of her and her perceived comprehension of his preference for her dead sister.

Neil further adds stress to the situation by moving the furniture about, ripping the ashtray from the table, and generally making a mess of things, against express orders by the condo management that the apartment remain in pristine condition.

Debby ultimately gets too far out of hand, forcing her parents to take matters in hand and find a more suitable living situation for her. Only Lola agrees to support her daughter through this traumatic event. With Max, now happily alone, settling down to relax in what is now for him a welcoming home, the ending of the play is ambiguous and unsettling.

Performances are excellent, with Evan Cabnet at the directorial helm.
Diane Davis creates a marvelous double as both Debby and Deborah.

Kathryn Grody’s portrayal conveys the concern and warmth of a Holocaust survivor who has suffered much but can still give affection toward others, including not only daughter Debby but also Neil, who is a lost soul without family of his own. In this connection, Hubert Point-Du-Jour’s New York street black was accurate and effective.

Mark Blum conveys both the rigidity of the strict Max as well as his warmth toward the lost Deborah.

This production is a revival of the 1995 production, which won an Obie Award.