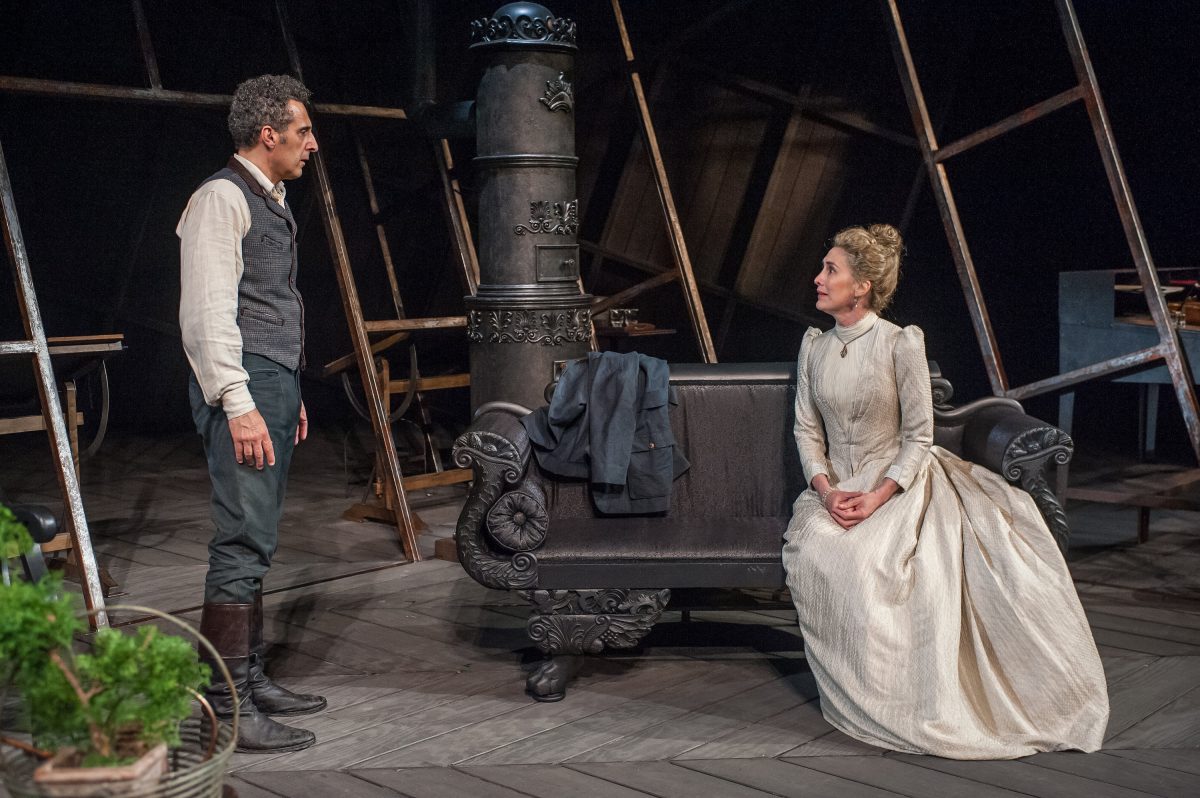 BROOKLYN, N.Y.—Henrik Ibsen’s sometimes enigmatic “The Master Builder” is being given a powerful interpretation at BAM’s Harvey Theater. The translation by David Edgar is directed by Andrei Belgrader and stars John Turturro in the title role of Halvard Solness.

The play’s fascination arguably lies in its melding of reality and fantasy; sometimes it’s difficult to know where one element begins and the other ends.

Halvard Solness is plagued by fear of death and equally fears young up-and-coming talents who would someday replace him.

Although many critics refer to Halvard as an architect, the character denies this, claiming that he virtually learned on the job as a young man. He is a builder, not an architect. Thus he resents his reliance on the young Ragnar Brovik (Max Gordon Moore), who works for him and who performs the nitty-gritty technical tasks required.

Ragnar’s father, Knut (Julian Gamble), once successful, lost his business due to Halvard’s aggressiveness. Now he is very ill, dying in fact, and wants desperately for Halvard to give Ragnar an upcoming assignment, so that Ragnar can make his mark before he, Knut, dies. But Halvard refuses, doggedly hanging on to his power.

Working as bookkeeper to Halvard is young Kaja Fosli (Kelly Hutchinson), engaged to Ragnar. But she is under Halvard’s spell and wants to continue working for him, no matter the pain it causes her. He deliberately teases and flirts with her because her presence will keep Ragnar as his employee and prevent him from going out on his own.

Halvard’s sedate wife, Aline (Katherine Borowitz), hovers in the background, demanding nothing, making a big point of performing her “duty.” A past tragedy, to be revealed later, informs her behavior. She is often visited by Dr. Herdal (Ken Cheeseman), who offers her some consolation.

Arguably the pivotal role in the play is that of Hilde Wangel (Wrenn Schmidt). Young, vivid, and oozing sexuality, she throws herself at Halvard, bringing out all his fears, his idiosyncrasies, and his desires. He describes her as a “wild bird of the forest,” and as a “bird of prey.”

Hilde displays feline qualities that the other two women lack, qualities both appealing and destructive. She urges Halvard to build her a “castle in the sky,” which, she insists, he once promised her when they had met 10 years ago, and she was little more than a child.

Halvard is presently in the process of completing a new family home for himself and Aline, to replace her family home, which had been lost in a fire. Blaming himself for the tragic accident, he continues to feel guilt for it. Although realistically he could not have been the cause, he believes that simply by willing something, he can bring it to pass. Unfortunately, as an aftermath of the fire, his and Aline’s twin babies died, something which Aline can never forget.

Hilde shares Halvard’s “magical thinking.” They both admit to having inner forces that can bring about mysterious results. However, as Hilde states, Halvard has a “fragile conscience,” something that does not plague her. He is riddled with guilt, which plays against his fierce ambition.

In the end, Hilde persuades Halvard to climb to the top of the tower of his new house and place a wreath there. This is a standard ritual for acknowledging the completion of a new home. However, the foreman of the building crew should have done it in this case, due to Halvard’s tendency toward dizziness.

Either Halvard’s inner demons or his desire to demonstrate his manhood to Hilde pushes him on. Hilde has the last word, however. She can now claim Halvard as “My Master Builder.”

John Turturro gives an impassioned performance as a man torn by demons and desires, demonstrating snatches of emotional instability referred to in the script.

Katherine Borowitz’s Aline conveys the pain and beauty of a wife who has suffered tragedy but continues to stand by her husband.

The play is staged tastefully and effectively by Andrei Belgrader on Santo Loquasto’s enchanting turntable set. Original music written and performed by Christian Frederickson and Ryan Rumery add to the ambience of the production.

Overall, “The Master Builder” is a grand addition to the Brooklyn Academy of Music’s list of the great classic plays of world theater.