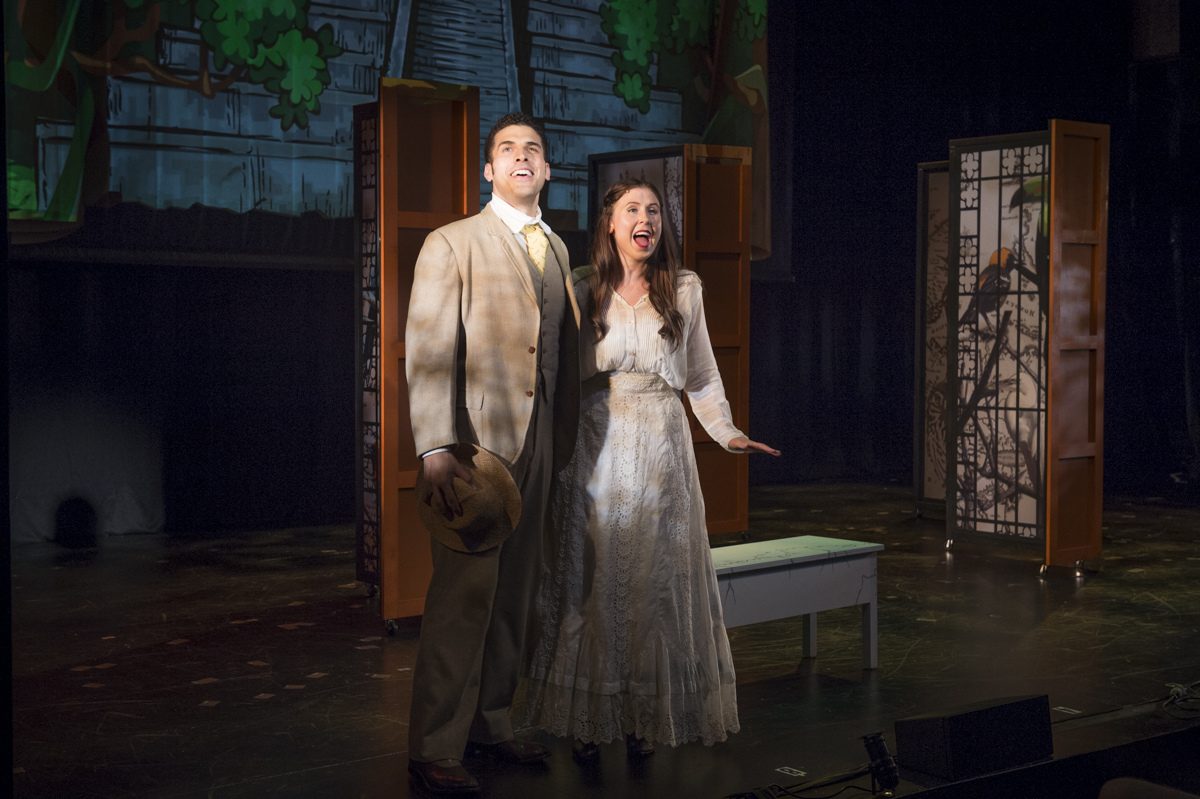 NEW YORK—The New York Musical Theatre Festival is presenting “The Mapmaker’s Opera,” an ambitious new musical based on the novel of the same name by Béa Gonzalez. Victor Kazan wrote the book and lyrics and Kevin Purcell the music. There is much to commend in the work despite its flaws.

The action takes place in the Yucatan in 1909, shortly before the Mexican Revolution.

The hero, Diego Clemente, is the impoverished illegitimate son of a Spanish don. He is an artist who specializes in sketching wildlife, inspired by John James Audubon’s “Birds of America.”

Diego is recommended to American naturalist Edward Nelson and travels to Mexico to help prepare a guide to the indigenous birds. Comic relief is provided mainly by Nelson’s assistant with the unusual name of Very Useful.

The rarest birds in the region are a pair of passenger pigeons (an almost extinct species) in the possession of Don Victor Blanco Torres, a wealthy landowner and exploiter of the local Mayan laborers. His wealth is based on hemp, produced primarily for the American market, and he is the villain of the piece.

Nelson tries to buy the pigeons for an American zoo in the hope that the birds can reproduce with the pair the zoo possesses. However, Torres turns him down in an obnoxious way: He says he will deliver the pigeons stuffed after they die.

The heroine of the musical is Sofia Duarte, the beautiful daughter of a bookseller (Roberto Duarte) in financial straits. She is being courted by Carlos, the foppish son of Torres, in whom she has no interest. Nevertheless, the women in her family (namely her mother, aunt, and waspish grandmother) want her to marry the wealthy fellow.

Sofia and Diego fall in love at first sight in the city square. They formally meet at the Duarte bookstore where the girl is working. Diego starts off on the wrong foot. Things move more smoothly when Roberto Duarte arranges a dinner at his hacienda for Nelson, Diego, and Very Useful.

It turns out that Sofia is also an artist, and she and Diego admire each other’s work.

There is an annual ball at the Torres estate at which the Duarte women hope that Sofia will snare one of Mérida’s eligible bachelors as a husband. Diego is reluctant to attend because he doesn’t know how to dance, but Very Useful warns him that he has romantic competition. At the dance, Sofia is forced into dancing with the smug Carlos.

The next day, Diego convinces Sofia to join him for an excursion in the forest where they proclaim their love. Her brief disappearance causes a family scandal, which erupts when she comes home with Diego and announces their intention to marry.

Very Useful warns Diego that a slave revolt is planned during which the slaves on the Blanco Torres estate will start a fire. He suggests that Diego take the opportunity to sneak into the aviary during the commotion and steal the passenger pigeons. (One flaw of the plot is that there is no reason why Very Useful can’t do this himself rather than involve Diego. Also, it would not help win the approval of the Duarte elders.)

Nevertheless, Diego goes along with this plan. On the Blanco Torres estate, he finds the wounded Don Victor and helps him to safety. Diego manages to free the birds but is fatally shot and dies in Sofia’s arms.

Purcell’s music is pleasant, leaning more toward power ballads than reflecting indigenous influences (though it does start with a flamenco dance). The music doesn’t aspire to be operatic, although there is a cute number about opera, “Nothing so Fine,” sung by Henry Gainza as Carlos. However, it is unclear why Carlos would think raving about opera would help him court Sofia.

Kazan’s lyrics are filled with clichés, and his book doesn’t tie up all of the plot strands. The villains and revolutionaries are stereotypes.

Among the chief pleasures of the production are the cast members, starting with the delightful Madeleine Featherby as Sofia Duarte. From Australia (as are the show’s creators), she has a lovely soprano voice and acts with charm. She and her likeable co-star Joel Perez could easily step in as the romantic leads in “Aladdin” or some other Broadway musical.

Tony Chiroldes is amusing as Very Useful and would be a good Sancho Panza the next time “Man of La Mancha” is revived.

Natalia Lepore Hagan is impressive in several parts, as singer, actress, and especially as dancer (partnered with Andrés Acosta). They handle a variety of styles from flamenco to ballet.