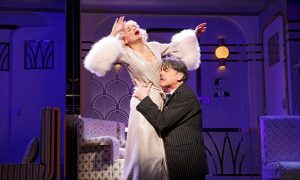 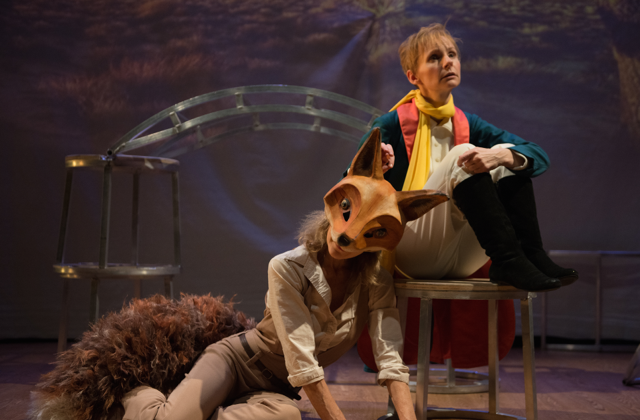 A lovely tale for all ages
By Diana Barth
biggersmaller
Print

NEW YORK—Adapted for the stage by Rick Cummins and John Scoullar, the beautiful book “Le Petit Prince” (“The Little Prince”) by Antoine de Saint-Exupery comes to theatrical life in a production by Hang a Tale Company.

An Aviator (Christopher Gerson) has crash-landed in the desert. As he desperately sets about to repair his plane, which he refers to as his friend, he is approached by a young figure, The Little Prince (a charming Tarah Flanagan). The young fellow has himself landed from another planet and engages the Aviator in conversation, seeking to get his bearings and learn more about life than he’s known before.

They discuss the baobab trees, which The Little Prince feels threatened by, with their flexible, grasping green tendrils. (These are moved about the stage by half-hidden performers.)

The Little Prince is particularly sad about his having left another planet, where he had met and become quite attached to a beautiful creature who had unfurled herself leaf by leaf and petal by petal to become an exquisite Rose (Jude Sandy).

Although the two had become quite friendly, the Rose later became petulant and difficult to deal with, so The Little Prince left her and traveled here. But now he misses her company, for at least he could communicate with her. A good friend is hard to find.

A King, who insists he rules over everything, engages The Little Prince in conversation, but their relationship is short-lived. It is The Fox (Paola Styron) who exerts a powerful influence over the young lad. Although The Little Prince would like to play with him, The Fox is reluctant, for he fears that the lad may have a dangerous gun like the others like him (humans). Also, The Fox explains, he is not tamed, so he cannot play.

The play treats us to deeper things than is evidenced by surface events.
The Little Prince through his kindness succeeds in taming The Fox, for which the latter is immensely grateful.

But as time goes by, The Little Prince’s loneliness overcomes him, and he yearns to return to his own planet where he knows he will once again meet his Rose.

The Snake (his flexible joints maneuvered by Kimiye Corwin and others) has been hovering about in the background. But now he comes into prominence, and we note The Little Prince making some sort of arrangement with the serpent.

Almost at the same time, and as if by magic, the Aviator’s plane becomes repaired, and he will soon be able to depart safely for his own home.

The story exerts a powerful effect upon viewers, as does the book itself, for it treats us to deeper things than is evidenced by surface events. As remarked by one of the characters (a line from the book), “It is only with the heart that one can see rightly; what is essential is invisible to the eye.”

Theater Review: ‘On the Twentieth Century’
Under the direction of Kim Martin-Cotten, a slew of elements are beautifully coordinated: Puppet design is by Matt Cotten of Puppets Among Us, music arranged and performed by Alexander Sovronsky, and movement direction by Paola Styron (who plays The Fox).

Michael Arden Larson, co-producer with Kim Martin-Cotten, portrays The Geographer and others). Many of the cast play “others.”

The new company Hang a Tale has plans later this season for both a Beckett and a Tennessee Williams play. It is a company of interest.