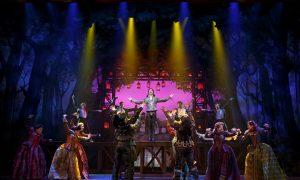 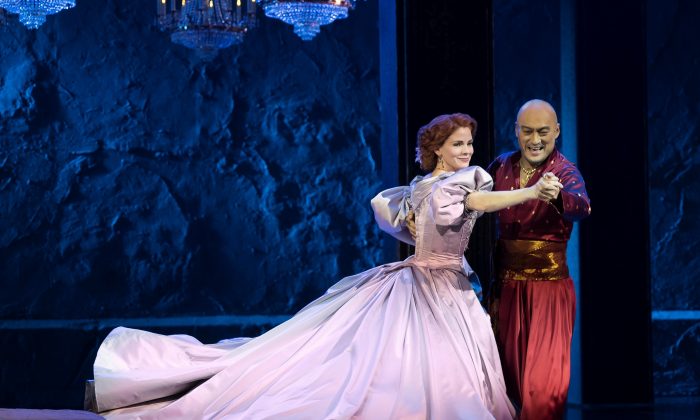 Anna (Kelli O'Hara) and the King of Siam in one of the most exciting meetings of different cultures in musical theater history: the number “Shall We Dance” in Rodgers and Hammerstein’s “The King and I.” (Paul Kolnik)
Arts & Culture

Theater Review: ‘The King and I’

An epic clash of cultures
By Judd Hollander
biggersmaller
Print

NEW YORK—The fish out of water premise has been around almost since the beginning of storytelling. In the American version, it’s often set in the Old West: A man is brought in to clean up the town only to upset the status quo too much in the process, thus bringing him into conflict with those who hired him in the first place.

When the two sides first meet in these circumstances, that first encounter can be rather interesting, to say the least. It can be especially so when issues of morality come into play or when tradition is looked at in opposite ways: One side sees it as something to be honored and changed only gradually, while the other wants to do its best to change things quickly.

Those on each side are sure in the knowledge that they know what’s best.

“Interesting” is the word used to describe such a meeting between two the main characters in this classic, exotic, and nearly disguised American story “The King and I.”

With music by Richard Rodgers, book and lyrics by Oscar Hammerstein II, and based on the novel “Anna and the King of Siam” by Margaret Landon, the musical is being given a sumptuous revival at Lincoln Center with a cast that is almost entirely of Asian descent.

It is Bangkok, Siam, in the early 1860s. Anna Leonowens (Kelli O’Hara), a widowed Englishwoman with a young son (Jake Lucas), has been engaged by the King of Siam (Ken Watanabe) to teach English and the “scientific” method of learning to his 67 children, as well as to a number of his various wives.

From the beginning, Anna, a strong-willed and principled woman, finds herself chafing at, in her opinion, the rather backward ways of the King and those around him—particularly in regard to how women are treated.

Anna represents one of the more controversial elements of the story: that the more civilized Westerner knows more about running a country than those who have lived there for centuries.
There’s also the fact that one must fall to one’s knees whenever the King enters the room and that a person’s head must never be higher than the King’s—this latter edict plays for laughs at one point.

In today’s world, Anna has come to represent one of the more controversial elements of the story: that the more civilized Westerner knows more about running a country than those who have lived there for centuries. British colonialism was very much in existence during the time this story is set.

Anna touches on this fact when she says to the Captain (Murphy Guyer) of the ship taking her to Bangkok that she’s lived in the East for years, in such places as India and Singapore. The Captain remarks that those places were under the protection (that is, colonial rule) of the British Crown.

Interestingly, when Anna concentrates on teaching the King’s children—while getting them to respect both her and the idea that there are different ways of doing things—the King ironically becomes her strongest ally. It is his fervent desire to see his country move into the modern age so that they will not be seen as something akin to “barbaric” by the outside world.

Ken Watanabe strikes a wonderfully commanding note as the King.
With this objective in mind the King and those in his court, under Anna’s guidance, perform a theatrical presentation for visiting English dignitaries. One of that group (Edward Baker-Duly), an old friend of Anna’s, causes the King to look upon Anna’s time with him with something approaching jealousy.

This not-quite-love, not-quite-hate relationship between Anna and the King, one which slowly turns to mutual respect, is what forms the strong underpinning of the story. Each tries to get the last word in their conversations and, especially in Anna’s case, ekes out a quiet moral victory when she can.

At the same time, the immense gulf between them becomes clearer when lovers Lun Tha (Conrad Ricamora) and Tuptim (Ashley Park) plot to flee the kingdom, despite the fact that Tuptim has been given to the King by her father, the King of Burma.

Strongest of all here is the Rodgers and Hammerstein score, with such hummable numbers as “Getting to Know You,” “I Whistle a Happy Tune,” and the wonderful “Shall We Dance?” The latter sequence shows for one beautiful moment both Anna and the King coming unequivocally together. Moreover, the ballet “The Small House of Uncle Thomas” is brilliantly staged.

Of particular note is the strong direction by Bartlett Sher and sets by Michael Yeargan. (Sher and Yeargan did similarly impressive chores with “South Pacific,” another Rodgers and Hammerstein classic, which was staged by Lincoln Center in 2008.)

Also of note is Christopher Gattelli’s excellent choreography, based on the original choreography by Jerome Robbins, and the orchestrations by Robert Russell Bennett.

O’Hara is very good as Anna, a somewhat subdued but altogether proud soul, trying to find her way in a strange land.

Watanabe strikes a wonderfully commanding note as the King. Even though he doesn’t know everything he needs to, he will never let anyone know it—other than Anna, who at some moments becomes the closest thing the King has to a confidant.

Some of this inner uncertainty the King faces is put across brilliantly by Watanabe in the earnestly comic number “A Puzzlement.”

Theater Review: ‘Something Rotten!’
Presented on a grand scale and winningly told throughout, “The King and I” deftly shows how a common goal can bring cultural opposites together even as those differences threaten to tear them apart.