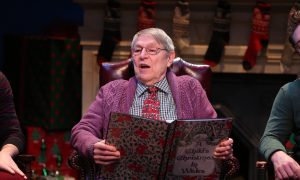 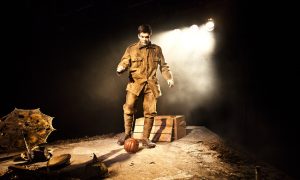 Theater Review: 'Our Friends the Enemy'
0 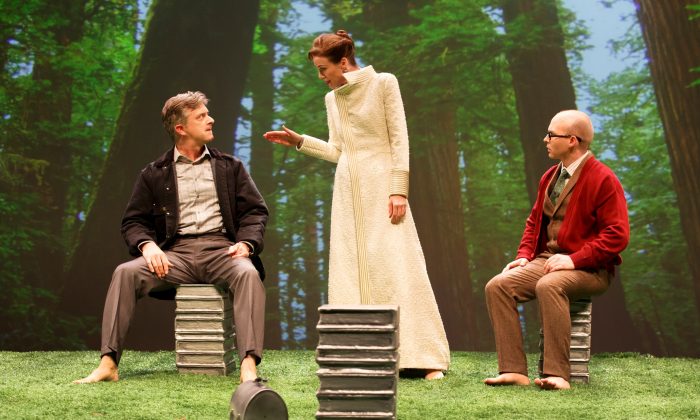 NEW YORK—Heaven, hell, and what they represent form the crux of the Fellowship for the Performing Arts’s thought-provoking presentation of C.S. Lewis’s “The Great Divorce.” Part existential journey, part morality lesson, the play shows how hard it can be to reach heaven, and conversely, how easy it can be to settle for hell.

The work is winningly performed by a cast of three in multiple roles.

For those souls willing to put down the burdens they’ve carried all their lives, be they bitterness, avarice, or simply an unwillingness to see what’s right in front of them, true paradise may be possible.

The story begins in a library filled with shelves and stacks of books. There are also numerous clocks on the walls, many showing different times and some seemingly without hands. In the midst of this organized chaos is a man known only as the Narrator (Joel Rainwater) who, after falling asleep, finds himself in an unfamiliar and rather ominous gray town—a place with continual rain and apparently empty of life.

The town is empty, that is, until the Narrator comes across several people at a bus stop. Eventually a bus appears, and they and the Narrator clamber on.

It quickly becomes apparent this is no ordinary bus ride. The vehicle travels not only from place to place, but also though the void of the infinite—a place where time has no meaning. The bus eventually stops at a pastoral location considered to be, for lack of a better word, heaven.

Just because the new arrivals have reached heaven does not entitle them to simply become part of it. They must choose to stay. They are required to first consciously cast off their earthly feelings, prejudices, and perceptions.

If, however, they continue to cling to what they once were, they must either get back on the bus to the gray town and live in the empty familiarity of their lives or remain in heaven as little more than intangible spirits—ones simply existing, but never belonging anywhere.

Among those facing these choices is Boss (Michael Frederic), who is greeted by a cold-blooded murderer (Christa Scott-Reed) he knew in life. Boss must now forgive the murderer before he can move on.

There’s also an artist (Reed), who must come to terms with the fact that what she painted before is meaningless here. While alive, she painted glimpses of a heaven no one else could see, but now that she’s actually in heaven, everyone can see what she saw while painting.

Others from the bus include a fellow (Frederic) who wants to take a piece of heaven back to the gray town so he can sell it, and a disillusioned man (Frederic) who’s made the bus trip multiple times simply just because it’s something to do.

It’s been said the devil cannot take someone’s soul unless it’s first willingly offered up to him. Similarly, anyone who actively chooses to follow a particular religion or deity makes that choice.

This same line of reasoning can be used here to explain why one can’t go back and rescue the multitudes of people still in gray town. It also explains why one can’t take a piece of heaven back down to hell and offer it to others. It all comes back to a question of personal choice.

But for those souls willing to put down the burdens they’ve carried all their lives, be they bitterness, avarice, or simply an unwillingness to see what’s right in front of them— true paradise may be possible—a journey to the mountaintop and what waits for them there.

For those without even a glimmer of willingness to become something more than what they now are, it may be truly too late for even hope of redemption. This situation is explained by a character simply known as the Grumbler (Reed).

Max McLean and Brian Watkins have done a superb job in adapting the Lewis work for the stage, with Bill Castellino’s direction being quite good.

Some of the strongest moments occur during the transitional sequences via excellent rear projections. One particularly good moment takes place on the bus, where most of the passengers appear only as shadows with only the Narrator and those he’s speaking to being actually real.

Rainwater is fine as the befuddled Narrator. He continually asks questions while trying to understand the ultimate point of what he’s experiencing.

Frederic strikes a rather ironic note as the Boss, who condemns the woman who killed his friend while refusing to admit his own past misdeeds.

Reed does very well both as the murderess who has acknowledged her sins and as the Grumbler—the characters being opposite sides of the same coin. Both sides show how we can never be truly forgiven until we first forgive ourselves.