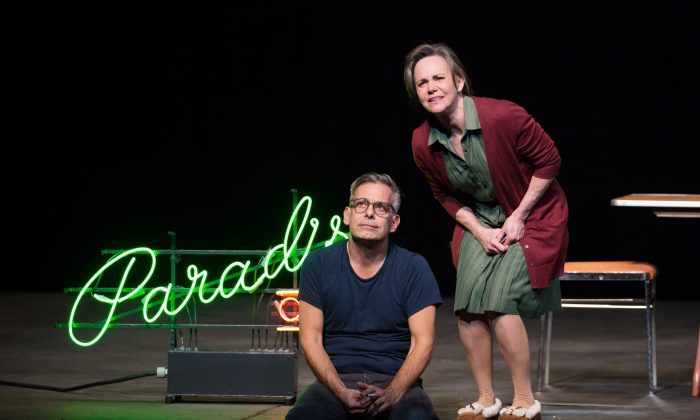 NEW YORK—All too often, people find themselves trapped in a situation far smaller than the scope of their dreams, a situation they are desperate to alter, both for themselves and for others. The most recent Broadway revival of Tennessee Williams’s “The Glass Menagerie”—its seventh—shines a brilliant light on this situation, at the Belasco Theater.

The story takes place in a St. Louis apartment in the 1930s. It is home to Tom Wingfield (Joe Mantello), a wannabe writer who works in a shoe warehouse; his domineering mother, Amanda (Sally Field), a former Southern belle who, to hear her tell it, once had dozens of eager suitors; and his sister, Laura (Madison Ferris), a young woman afflicted both by a physical condition and a crippling shyness. The latter condition exacerbates Laura’s already overpowering self-consciousness to such a degree that she prefers her collection of little glass animals to human interaction.

‘The Glass Menagerie’ is a play about memory and how it can hold you in its grip.

Amanda, who is nothing if not a realist, desperately fears for her daughter’s future. Her speech to Laura about what happens to those who don’t find security, either through marriage or a career, and are thus left to the fates of an unforgiving society, is quite powerful. The words reflect Amanda’s own fears of growing old alone.

Tom already has one foot out the door, as he’s afflicted with his absent father’s love of wandering and wants to escape from a mother he can never seem to please. Tom and Amanda’s relationship turned combative years ago. Their only common ground is Laura and their need to find someone who can care for her after they are gone.

The potential solution to their problem is Jim O’Connor (Finn Wittrock), Tom’s friend at the warehouse. He’s invited over for dinner in the hopes that he and Laura will hit it off.

Jim, as it turns out, is another person trying to better his situation. While he initially accepts the dinner invitation on a lark, he soon begins to bond with Laura. As he encourages her to come out of her shell, we learn more about his plans for the future.

“The Glass Menagerie” is a play about memory and how it can hold you in its grip, seemingly forever. Memory is the term used both by the author and Tom, who also serves as the show’s narrator. He looks back on the events of the play from some point in the future, while also taking part in them as they play out.

Sally Field takes a role that has been played by so many accomplished actresses and makes it totally her own.

Mantello, at age 54, is an interesting choice for Tom, a role usually played by much younger actors. Yet his age adds an extra layer of poignancy as it slowly becomes apparent that, even after so much time has passed, he’s is still haunted by these events.

Interestingly, actor Eddie Dowling, who played Tom in the original Broadway production, was 55 years old at the time.

Also inspiring is the casting of a physically disabled actress in the role of Laura. Ferris performs a good part of the show in a wheelchair. However, as the play progresses, it becomes clear the only thing keeping Laura from moving forward is her terrible shyness, which proves far more disabling than any physical condition.

Director Sam Gold gives the show an even fresher interpretation thanks to his brilliant directorial choices. He strips away most of the trappings that are usually associated with the work. Gone are such things as an apartment filled with objects close to 20 years old and an atmosphere of faded charm.

Instead, we are treated to a bare table, harsh lighting (at least in the beginning) and props the cast takes from a row of shelves located stage left, when needed. The very able company allows the words of the text, alternatively harsh and lyrical, to come through full force—and the result is nothing short of electrifying.

This is especially true with Field’s performance. She takes a role that has been played by so many accomplished actresses and makes it totally her own. Her only prop is an old, faded dress. The character has kept it for years, and it reveals the anguish and emptiness she feels in her life as she clings to a vision of the person she used to be and a lifestyle she used to enjoy.

Theater Review: ‘The Most Reluctant Convert’

Also quite effective is Adam Silverman’s lighting design. It goes from harsh to muted to a wonderful candlelight moment, that makes one think something magical may happen.

Poignant and haunting, this production of “The Glass Menagerie” boils the play down to its bare essentials and shows exactly why the work has more than stood the test of time.