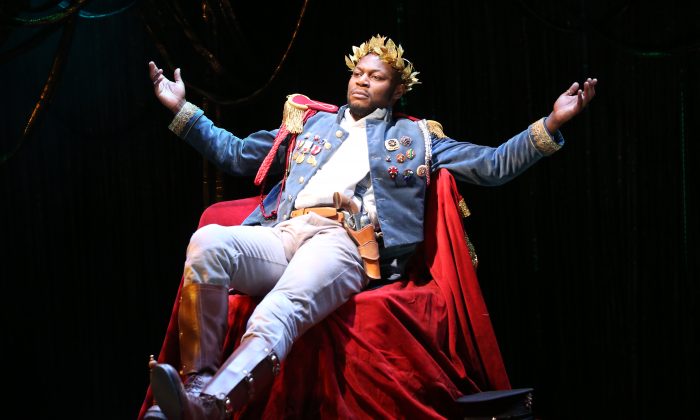 NEW YORK—Emperor Brutus Jones doesn’t know it yet, but the natives are about to become restless on this unnamed West Indian island where he proclaimed himself ruler—or rather, tyrant—two years prior.

Bursting into the throne room, dressed in a glittering suit, covered with medals, and wearing a golden crown, Jones (Obi Abili) bellows angrily, “Who dare wake up the emperor?”

Too much praise cannot be heaped upon Abili.

But it’s only his ally, the unscrupulous trader Henry Smithers (Andy Murray). Although Smithers informs Jones of an impending overthrow, the latter coolly lists his advantages: He has food and money—bilked from the inhabitants of the island and stashed away, he knows these woods, and he has a revolver with six bullets—five of lead and the sixth of silver, to be used on himself if the need should arise.

With director Ciaran O’Reilly at the helm, the remarkable British actor Abili embodies the emperor to a T. He is strong, imperious, wily, smug, and confident; no one can get the better of him.

By noted American playwright Eugene O’Neill, the 1920 play goes on a wild ride not only through the fearful forest but through the mind and soul of Jones, a former Pullman porter who has murdered recklessly and bullied his way to power and fortune.

But a fateful dark night faces him, possibly the last he will ever experience. Tom-toms begin to sound rhythmically in the distance. The natives are beginning their assault.

Plunging into the forest, Jones encounters large, strange, featureless creatures dressed in peculiar dark garments, which appear to do a slow dance, sometimes approaching him, then backing away, then seeming to envelop him. Jones keeps running.

His stash of food cannot be found! Realizing he must have sustenance for his long journey to the sea, Jones’s mind begins to loosen its tether. Are the following fantasies or reality? He encounters a witch doctor (Sinclair Mitchell), who makes threatening gestures; a crocodile (Reggie Talley) advances upon him.

Jones experiences visions of past events, now warped and hallucinatory: a dice-playing fellow porter he murdered, and a chain gang from his prison days. But they don’t seem human; they are robotic, like puppets. Small beady-eyed pig-like creatures run at him. He silences them all with his meager supply of bullets. Only the silver bullet remains.

The harshest segment features an auction of human beings, where Jones is forced to participate as one to be sold. He appears to feel humiliated. This scene arguably hits home with the audience. What could these acts have done to the psyches of innocent victims robbed of their liberty? There’s too much evidence in present-day life that attests to the kind of damage done.

The play’s subtext unmistakably sets forth intimations of greed and corruption. Jones’s heart-pounding, violent journey can only have one ending. The self-styled ruler has finally lost his way—physically, emotionally, and spiritually.

Too much praise cannot be heaped upon Abili, who embodies Emperor Jones in body and mind, his taut actor’s intelligence merging with his role. Furthermore, in addition to portraying the viciousness of the character, he makes us feel compassion for this tortured man.

Kudos to O’Reilly, whose directing brought about a stunning rendition of this important theater work.

Others in the fine cast are William Bellamy, Carl Hendrick Louis, and Angel Moore.

With costumes by Antonia Ford-Roberts and Whitney Locher, choreography by Barry McNabb, sound design by Ryan Rumery and M. Florian Staab, and puppet and mask design by Bob Flanagan.

Diana Barth writes for various arts publications, including New Millennium. She may be contacted at DiaBarth99@gmail.com