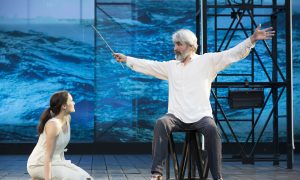 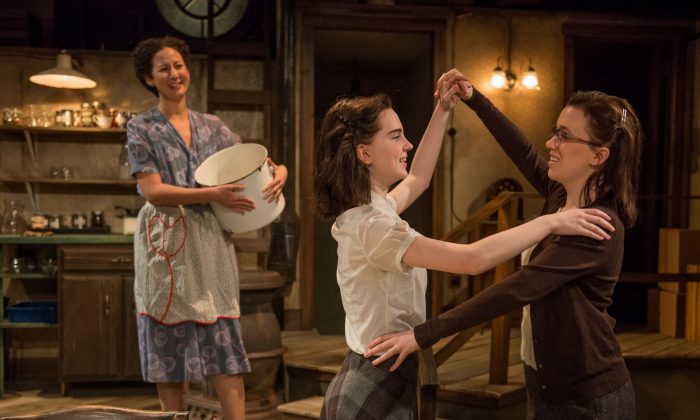 Getting the big picture: persecution then and now
By Sharon Kilarski
biggersmaller
Print

GLENCOE, Ill.—”The Diary of Anne Frank,” the current production by Writers Theatre, is newly adapted by Wendy Kesselman and directed by Kimberly Senior. It is also superb.

As I sat in a darkened theater watching the story of a young girl persecuted for her faith by a state-sanctioned genocide, I couldn’t help but think of Christine.

In Beijing 2001, in one of the hottest Julys on record, Christine Lin was separated from her mother and locked in small jail cell. The pair had been in an apartment talking with friends and had no idea they had been followed. They knew they were in danger—just being in China was dangerous.

“Don’t you know we have the right to lock you up?”

Her crime? She, her mother, and friends practiced Falun Dafa, a spiritual practice that adheres to the principles of truthfulness, compassion, and tolerance.

The story of Falun Dafa’s persecution in China has hardly been heard of. The story of Anne Frank, set in Amsterdam during World War II has become iconic.

Anne’s story depicts the Holocaust from the inside out—that is from the perspective of those living it rather than those fighting against it. It also tells the story before and after the mass killings. It captures the interim before these refugees in their own land are captured by the Nazis and then briefly describes their fates afterward.

Thirteen-year-old Anne (Sophie Thatcher), her older sister, Margot (Lila Morse), and her parents, Otto (Coburn Goss) and Edith Frank (Kristina Valada-Viars), arrive at a store annex, which has been turned into an apartment. There they await another family, the van Daans (Lance Baker and Heidi Kettenring) and their son, Peter (Antonio Zhiurinskas). Later Mr. Dussel (Kevin Gudahl), a dentist, joins them.

The Writer’s Theatre is housed in the back of a bookstore and scenic designer Jack Magaw, mimicking the annex entrance, crafted a winding passage for the audience to enter. We literally sat behind a storefront, just as the Franks, Dussels, and van Daans did. Moreover, the theater seats only 50, so we are close enough to the characters to nearly touch them.

The eight characters hope to hide out in the annex for the duration of the war and escape the fate of other Jews. They cannot leave these rooms—ever—until the war is over, and they must depend on the kindness of Mr. Kraler (Eric Slater) and Miep Gies (Leah Karpel) for supplies and news.

And as our theater guide/stage manager alerts the audience, given the unique theater entrance, we cannot leave either, unless we forego the ability to return. We, like the characters, are trapped for the duration.

The characters focus on themselves and their own interests. They lose the bigger picture of why they are together.
All eight characters enter the apartment extremely grateful to escape their seeming fate. But as the days and then months pass in cramped deprivation, very human needs emerge.

We see a lively girl angry with her mother for stifling her, a woman holding on to a fur coat as a memory of her father, a man eating a piece of bread when he is hungry. All these events would be ordinary and of no consequence in another time and place, but in this scenario they enlarge to the point that they become, respectively, acts of thoughtlessness, selfishness, and even betrayal.

In these moments, the characters focus on themselves and their own interests. They lose the bigger picture of why they are together.

Coming at Costume Design From the Artist’s Perspective

Theater Review: ‘The Tempest’
Except for one. As a leader, Otto Frank holds on to the bigger picture. He is also the only survivor of the camps.

The cast is uniformly excellent. It is rare today for an actor to convincingly portray noble motives, but Goss portrays Otto as a truly gentle man. As Edith, Valada-Viars brings us an honest, deep woman who secretly feels they all are doomed.

Morse plays Margot as a teen too sensitive in spirit and health to thrive. Baker portrays van Daan as a sophisticate who loves the pleasures of life, a match for his wife, a character in Kettenring’s performance, who is spoiled but sparkling and charming. Zhiurinskas gives Peter a sense of a teen just emerging from loneliness. In Dussel, who separated from his non-Jewish wife to go into hiding, Gudahl shows us consistent worry.

But, of course, the heart of the show is Anne. Thatcher plays Anne as a lively girl, ready for adventure, ready to take on life, irrespective of her situation. I imagine that if Anne had survived, (and she, her family, and friends were only a hair away from doing so), she would have been much like my friend Christine: vital, bright, witty, and ready to take on the world.

Christine and Anne were luckier than most. Christine, as a U.S. citizen, was deported from China to America once her citizenship was discovered, and she lived to tell her own story. Anne was lucky only in the sense that others lived to tell her story—that she is remembered.

But how many stories of the Holocaust have been forgotten?

How many stories of Falun Dafa’s ongoing persecution have not been considered important enough to acknowledge?

Perhaps it is our turn to move away from day-to-day self-interest and remember why we are here. Shall we concentrate on the big picture?