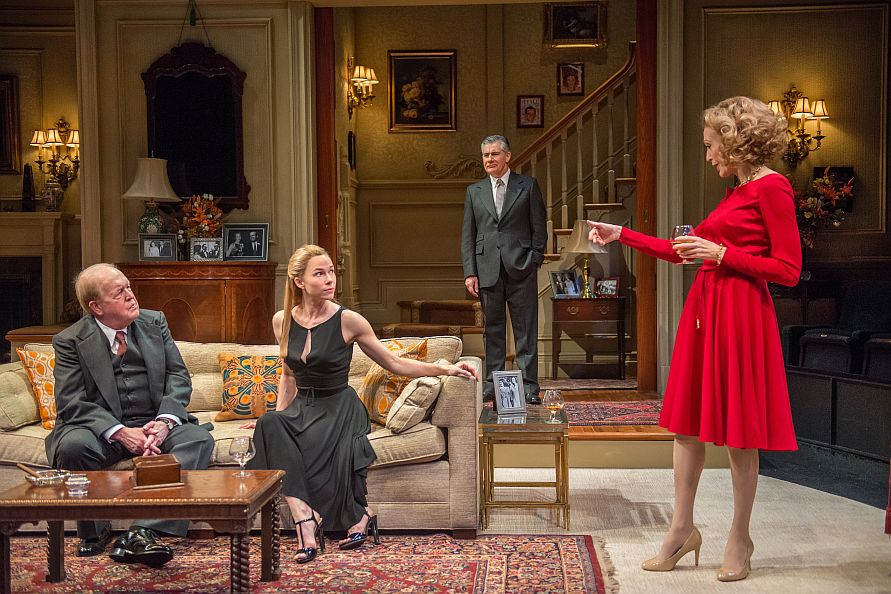 Theater Review: ‘The City of Conversation’

NEW YORK—Anthony Giardina’s new play, “The City of Conversation” (referring to Washington, D.C., so named by writer Henry James), transports us over time into the milieu of that city’s political intrigues, as well as bringing forth various characters’ complex personal interests and needs.

Initially set during the Carter presidency, liberal Democrat Hester Ferris (vividly played by Jan Maxwell), a Washington hostess of distinction, is readying herself upstairs for that evening’s dinner party at her Georgetown townhouse. She will entertain conservative Senator George Mallonee (John Aylward) and his wife, Carolyn (Barbara Garrick), to convince the senator of an important political move.

In attendance will be Hester’s intimate, Senator Chandler Harris (Kevin O’Rourke). Assisting but not attending the evening’s soiree will be Hester’s loyal and hard-working but more retiring sister, Jean Swift (Beth Dixon, in a beautifully graded performance).

The pair is invited to the dinner, but a horrified Hester exclaims privately to Colin, “You can’t marry that girl, that hair, those legs.”

“But of course I can,” Colin retorts.

Battle lines are drawn as Hester immediately senses that the outwardly placid Anna encases an aggressively ambitious young politico. And take over Anna does, after the evening’s dinner, over Scotch and cigars, thereby stealing some of Hester’s thunder.

Eight years later, under President Ronald Reagan, Anna is shown to have snagged herself a good position in Reagan’s Justice Department, while hubby Colin labors conscientiously for a modestly placed conservative senator. A great plus in Hester’s life, however, is her daily caretaking of the couple’s 6-year-old son, Ethan (Luke Niehaus).

But Hester’s passionate liberalism and her ongoing fight to make things right in the world lead her to undertake a project that would drive a fierce wedge between her and her relationship with Colin.

When Anna discovers a letter that Hester plans to publicize, which would wreck the appointment of a conservative judge to the Supreme Court and ultimately threaten Colin’s own position, the younger woman inserts an extreme power play into the family unit. The play would wrench Hester’s loving relationship with grandson Ethan.

Will Hester for once relent, scratch the letter, and give in to her personal need for her grandson and son?

The last scene, taking place on the night of President Barack Obama’s first inauguration, finds the grown Ethan (played, as was Colin, by Michael Simpson) meeting with Hester after a many year separation. Also present is Ethan’s friend, Donald Logan (Phillip James Brannon).

After a rocky beginning, the scene becomes tender and poignant. It’s clear that many years of loving possibility have been sacrificed. One is left with the question: Are personal relationships more or less important than one’s political stands?

The play packs a powerful punch, highlighted by terrific performances, none grander than the exciting and intelligent central performance by Jan Maxwell, looking svelte and elegant in Catherine Zuber’s quietly sumptuous costumes.

Kudos to director Doug Hughes for skillfully meshing all the complexities of this thoughtful and entertaining evening in the theater.