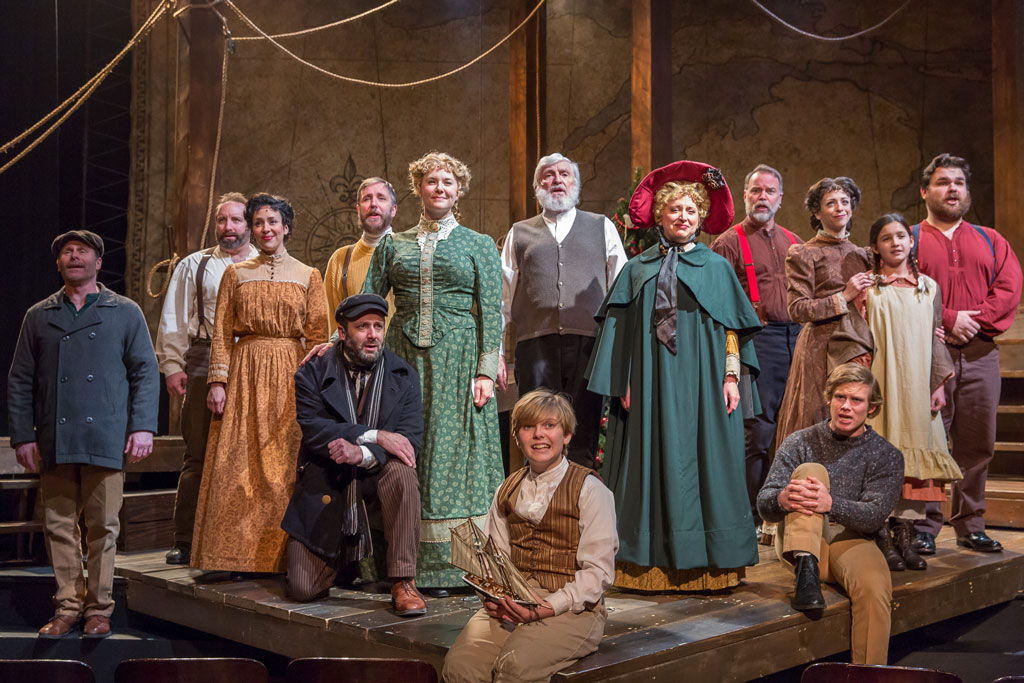 The entire cast of “The Christmas Schooner: A Musical.” (Brett Beiner)
Arts & Culture

A story of genuine kindness
BY Sharon Kilarski TIMEDecember 15, 2014 PRINT

CHICAGO—Christmas trees have become such an iconic symbol for the holidays that now many non-Christians and even nonbelievers display and festoon a specimen with lights and ornaments. Thus, it’s fascinating to see a piece of history that helped this beloved symbol achieve its status.

The Christmas Schooner: A Musical, based on a true story, has been remounted at the Mercury Theater Chicago. It tells how the captain and crew of a schooner risked their lives to bring Christmas trees across the treacherous winter waters of Lake Michigan to German immigrants homesick for Christmases of the old country.

The lovely story is simple. It pits the altruistic wish of Captain Peter Stossel (Stef Tovar) to bring Christmas joy to Chicago against the need of his wife, Alma (Brianna Borger), to protect her husband by keeping him from the foolhardy journey.

The captain’s selflessness inspires his son, Karl (William Anderson at age 9 and Brian Bohr at age 15), earns the trust of his aged father, Gustav (James Wilson Sherman), and eventually, the understanding and acceptance of his wife.

His kind act also helps transplant the German tannenbaum tradition to other Chicago immigrants, with hundreds awaiting the Christmas ship year after year.

The sweet message and story are well supported by the cast whose maturity makes this whole performance feel full, rich, and thoughtful. Yet the overall energy is not hampered in the least.

Tovar’s work always has an easiness about it, and here as the captain, we see it channeled into a man who has a light touch. He doesn’t so much command his men as earn their willingness because of their respect for him. Tovar sings well, too.

Borger as Alma, in addition to her beautiful voice, has some wonderful last scenes in which we feel dignity and grace replace heartsickness.

Sherman’s robust bass voice as Gustav is a delight as is his humor early in the show. Later, his wisdom shines.

The hidden musicians do a wonderful job under the direction of Eugene Dizon as they bring the heartfelt, original music of Julie Shannon to life. And even more joyful is the singing. The full-bodied sound of the eight sailors sounds like a company twice that size.

I left the theater wanting to see other tales of Christmas traditions. We have been so saturated with 19th century England, with its images of plum puddings, roast goose, and holly, that we have lost sight of the many traditions that have infused our culture.

Although The Christmas Schooner does not go as deep as A Christmas Carol, which tells the story of a soul’s reclamation, it does present us a noble soul who quietly enhances the lives he touches. Sounds like a Christmas message to me.