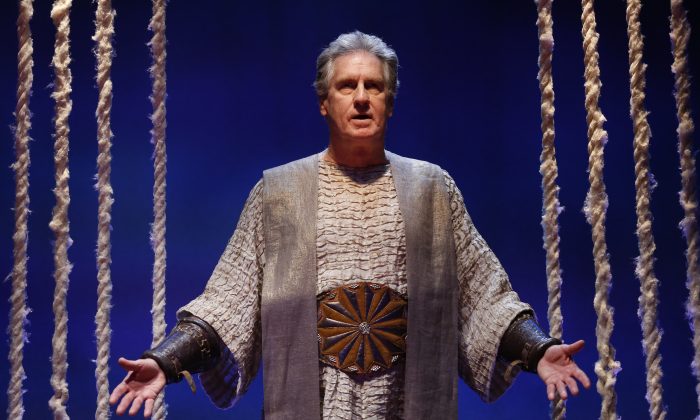 Is Creon a despot or honorable leader? Paul O'Brien plays the king in Seamus Heaney “The Burial at Thebes,” based on Sophocles’ s "Antigone." (Carol Rosegg)
Arts & Culture

NEW YORK—As single-minded King Creon of Thebes in ancient Greece puts it, “If you’re not with me, you’re against me.” This is a line from Irish Nobel Laureate poet Seamus Heaney’s adaptation of Sophocles’s “Antigone,” now playing at The Irish Repertory Theatre.

There has been civil war in Thebes, resulting in the death of two of Antigone’s brothers, on opposing sides, each killing the other. King Creon (Paul O’Brien) orders that Eteocles, loyal to the state, be given a proper burial. But Polyneices must be left unburied, out in the open desert to be eaten as carrion, the deepest of insults to the dead.

Tragedy will ensue due to a stubborn mind that permits no flexibility.

In a program note, director Charlotte Moore (also artistic director of The Irish Rep) notes that Heaney wrote this play as a direct parallel to the Bush administration’s stance on the war in Iraq. That is, if you don’t support the administration’s wish to eliminate the tyrant in Iraq, then you are on the wrong side.

In the play, the passionate Antigone (Rebekah Brockman) urges her gentler, passive sister, Ismene (Katie Fabel), to join her in burying Polyneices. This act would bring a death sentence upon anyone who dares disobey Creon’s order. Ismene refuses to fight what she feels is a losing battle and reneges. Angry, Antigone determines to perform the deed alone.

Later, when the Guard (Colin Lane) discovers Antigone performing the forbidden rite, Creon sentences her to be sealed in a difficult-to-reach cave, where, of course, she will ultimately die.

Creon clings to his willful decision, though others try to dissuade him. His own son, Haemon (Ciaran Bowling), who is betrothed to Antigone, explodes in rage against his father at the latter’s stubbornness. Creon’s wife, Eurydice (Winsome Brown), cannot move her husband.

Even the blind seer Tiresias (Robert Langdon Lloyd), whose wise words would move the hardest mind and heart, cannot cause the willful ruler to change his stance. There is a strong implication that tragedy will ensue due to a stubborn mind that permits no flexibility.

Arguably, the appeal of Antigone’s story lies in its universality and timelessness. The conflict of loyalty to one’s nation as opposed to one’s loved ones, family, or friends, has existed from time immemorial.

Think of the not-too-distant past, of the blacklisting era in the 1950s, with some writers and actors refusing to name names of their past associations with those who might have been members of the Communist Party. Those were harsh times, with not only loss of financial remuneration, but suicide or giving up one’s home and leaving the country.

Think of many of us who live possibly simpler lives, who have had to bite our tongues when faced with the possibility of retaliation if we dare criticize our bosses, our spouses, or any authority figures.

The old saw “words can never hurt me” has been proven untrue.

Heaney’s text, poetic yet hard when it needs to be, is masterful. Of the cast, arguably Robert Langdon Lloyd fares the best with Heaney’s style; Lloyd is able to fuse the poetic word or phrase with the intention or passion required to good effect.

I found Tony Walton’s set puzzling at first, consisting of slightly decorated ropes strung from ceiling to floor. I realized later that when one stands far back from the stage or sees the set in a photo, the ropes appear to be solid Grecian columns. So it was a valiant attempt on Walton’s part to create a sense of ancient Greece.

In sum, the play brings to mind basic rules by which any society must function and points the need for constant vigilance on the part of earnest citizens everywhere.

Diana Barth writes for various publications, including New Millennium, an arts publication. She may be contacted at DiaBarth@juno.com