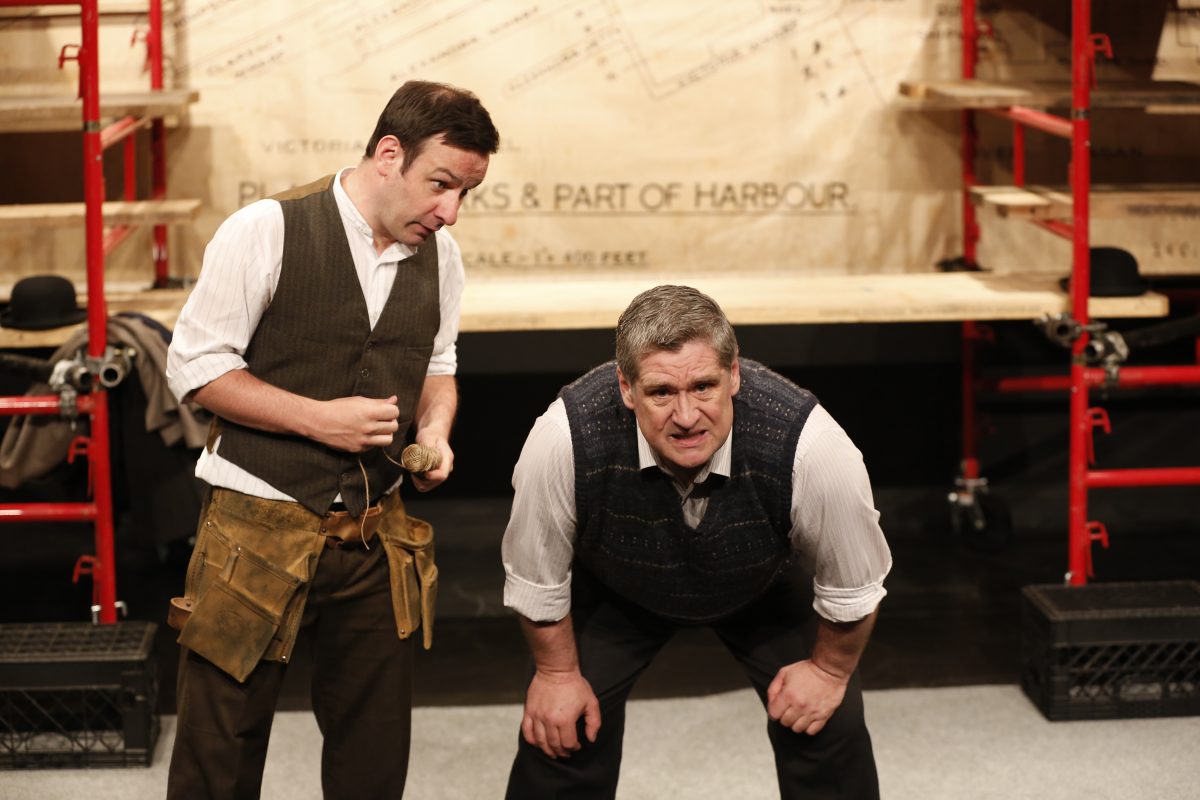 Trouble seeing the whole shipyard for the nuts and bolts
BY Judd Hollander TIMEJune 14, 2013 PRINT

NEW YORK—Playwright Dan Gordon certainly has a soft spot for the sprawling shipyards of Harland and Wolff in Belfast, Ireland—perhaps too soft a spot. All too often details take priority over the story in his otherwise strongly constructed The Boat Factory, which is currently berthed at 59E59 Theaters as part of the Brits Off Broadway Festival.

The play begins in 1960 with the two person cast (Dan Gordon and Michael Condron) recalling the launching of the S.S. Canberra, ship number 1,621 to be built at the facility. This launching is both the start of the story and the beginning of the end for the shipyard. Changing times and the increasing popularity of air travel herald massive changes to come in the decades that follow.

“The Boat Factory” is actually two tales in one. The first shows the history of shipbuilding in Ireland, how the facility was eventually created (“too many bends—not enough depth—can’t get the big boats in”), and the various men who made it happen.

The second tale details how in 1947, young Davy Gordon (Gordon) began as an apprentice at the shipyards, where he would learn the trade that would serve him for life.

Unfortunately the play, written for a predominately British audience, offers a lot of factual information. Numerous names and dates can be hard to keep in mind if one isn’t familiar with the topic. It would be like asking someone from the United Kingdom to follow a play that lists various people and statistics connected to the first U.S. transcontinental railroad.

Additionally, the character’s continual practice of reciting the various types of tools and methods used for ship construction tend to blur together after a while.

Where the show does work is when the script touches on more general issues, those which everyone can relate to. These include the practices of health and safety at the boat yards—practices that sadly were never an issue, as Davy ruefully notes at one point.

Davy also goes on to say how most safeguards were put in place only after an accident had occurred—to make sure it would never happen again—rather than to stop them from happening in the first place.

Thankfully, the acting is first rate. Gordon and Condron play multiple characters during the course of the story.

Gordon is excellent in his portrayal of Davy, a sort of genial everyman the audience can follow as he and the audience learn about his working environment. Davy’s recollections of how he was hired in the first place and the colorful characters he meets during his tenure are both involving and endearing.

Condron does particularly well playing Geordie Kilpatrick, Davy’s best mate at the shipyards. Geordie, crippled due to a childhood bout of polio, works on his own coffin in his spare time. Condron also offers a particularly hilarious turn as Clifford, a mentally challenged sort whose overeager and always earnest attitude leads to some funny moments.

It’s through Davy’s and Geordie’s descriptions that the shipyards begin to come alive, offering a stirring portrait of a place so big that “on a foggy day you can’t see from one end of the shop to the other,” let alone the various other structures nearby.

Davy’s comments are particularly image-filled, such as when talking about the pounding of millions of footsteps as the workers head to their job each morning and about an angry fellow who tries to beat up a supervisor he believes is stepping out with his wife.

Continuing his imagery, he talks about how a few industrious workers started an illegal business furnishing kitchens using materials from the factory, creating the pieces on an unused floor in one of the shipyard buildings.

The work also offers some interesting historical facts, such as how this was the shipyard where the Titanic was built. “It was all right when it left here,” Geordie says defensively.

Direction by Philip Crawford is sure-handed with both actors making full use of the playing space. The set is nicely designed to resemble a combination woodshop and tool area, with a map of the vast shipyards displayed on the back wall.

The Boat Factory makes for an interesting and enjoyable excursion, but the waters navigated are overloaded at times with excess flotsam and jetsam for it to be clear sailing throughout.