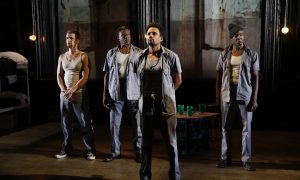 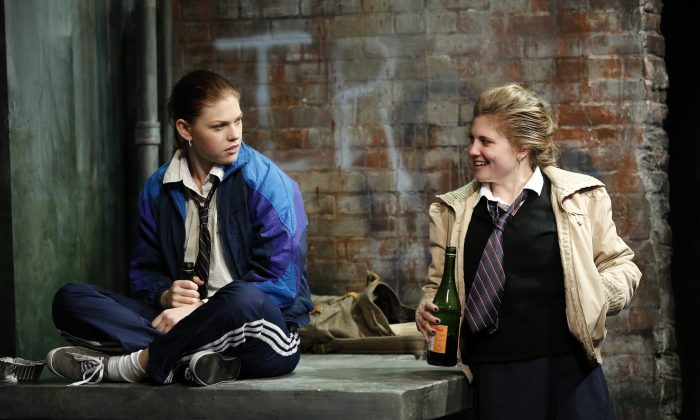 (L–R) Anne Malloy (Kate Lydic) is having a rough time since her parents were innocent victims in war-torn Belfast, and her best friend Ciara (Arielle Hoffman) offers her little help, in “The Belle of Belfast.” (Carol Rosegg)
Arts & Culture

Theater Review: ‘The Belle of Belfast’

Turmoil within and without
By Diana Barth
biggersmaller
Print

NEW YORK—With dissonant music filling the theater prior to the start of the performance, John McDermott’s set featuring a strip of barbed wire, and Jeff Larson’s painfully true projections of war, one knows one is about to witness something tense and serious.

The belle in the title refers to 17-year-old Anne Malloy (Kate Lydic), the major character in Nate Rufus Edelman’s stirring play “The Belle of Belfast.”

Anne is noted by the young men in her neighborhood as being very generous, perhaps overly generous, with her attentions. And why not?

It is 1985, Belfast. And Anne has suffered a terrible personal loss wrought by the devastation known as The Troubles. Her parents have been killed by a thoughtless act, a bombing in a small street where the older couple had been innocently shopping.

As set against the backdrop of a city in turmoil, ‘The Belle of Belfast’ makes a vivid impact.
In the years from 1969 to 2001, the conflict between the Irish Republicans of Northern Ireland, composed of mostly Roman Catholics, against Ulster Loyalists, mostly Protestant and the armed forces of the British government, took the lives of 1,500 people in the city of Belfast alone.

Orphaned at an age when she arguably needs sensitive guidance, Anne is left pretty much on her own. She lives with her somewhat ditsy Great-Aunt Emma (Patricia Conolly), who is not too helpful in the emotional or intellectual support department.

So Anne turns to the Roman Catholic Church for guidance. The Church in this case happens to be handsome young priest Ben Reilly (Hamish Allan-Headley). He wants only to give proper religious comfort to the girl and to help his flock keep their emotional heads above water during this stressful time in their city.

However, Anne, who is soon smitten with Reilly, can’t restrain her feelings. His is the only sympathetic voice she’s heard in such a long time. And the priest, properly celibate for many years, feels driven beyond his strength to resist. In a turbulent scene, with a wind-and-lightning storm raging outside (courtesy lighting designer Justin Townsend and sound designer Daniel Kluger), Reilly breaks his vows, and Anne is driven into an assumption of maturity for which she is not ready.

Reilly, plagued by guilt for his act, insists on confessing to his fellow priest Dermott Behan (Billy Meleady). Behan, who had formerly behaved like a classic tippler coupled with overly vehement republican outbursts, now turns dead serious. He is deeply appalled that the younger man has set aside his vows and insists that Reilly take proper action in the matter.

With an outcome that neither had expected, Anne and Reilly must now make life changes. They have both come to realize that acts have sometimes painful consequences.

As set against the backdrop of a city in turmoil, “The Belle of Belfast” makes a vivid impact.

A veteran of theater as well as film and TV, director Claudia Weill superbly brings this play to theatrical life. (She also directed “The Belle of Belfast” in its world premiere at Ensemble Studio Theatre in Los Angeles in 2012.)

Kate Lydic easily makes the transition from troubled teen to a young woman who has learned to make the best of a difficult life.

Theater Review: ‘ToasT’
As one of the two of the older generation portrayed, Patricia Conolly paints a delightful picture of a woman slightly addled but a survivor. Billy Meleady (who played Dermott in Los Angeles) appears to have stepped off a Belfast street; he is that authentic in every way.

Costumes by Terese Wadden are inconspicuous, which is spot on for this production.

“The Belle of Belfast” adds another gem to the producing crown of The Irish Repertory Theatre.

Diana Barth publishes New Millennium, an arts publication. She may be contacted at DiaBarth@juno.com