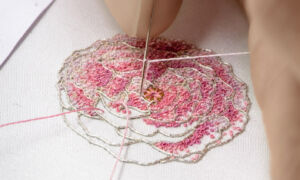 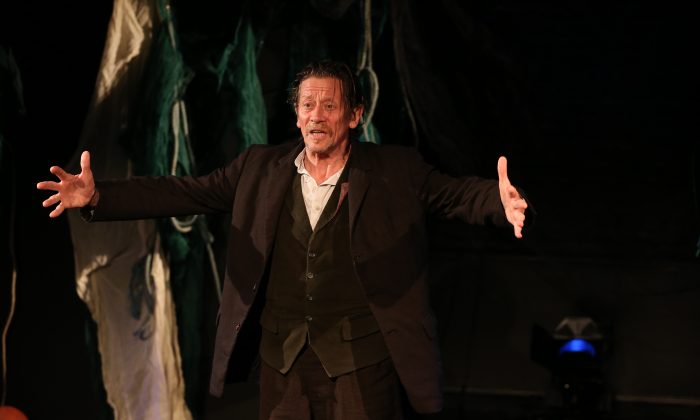 Irish actor Brendan Conroy appears in the one-man show “The Aran Islands,” about the inhabitants of the islands as seen by playwright John Millington Synge around the turn of the 19th century. (Carol Rosegg)
Arts & Culture

Tight bonds on a barren island
By Diana Barth

NEW YORK—More than 10 years ago, I visited Inishmore, the largest of the three Aran Islands off the coast of Galway, Ireland, and I can say that the islands have caught up to a large degree with contemporary society. But it was a different place when they were visited by the noted playwright John Millington Synge over a period of five summers (1898-1902). He came on the advice of his friend and mentor poet W.B. Yeats. The weather on the islands was so uninviting that Synge wintered in Paris.

Synge’s immersion in the culture, habits, tales, and, yes, climate, resulted in his book, “The Aran Islands,” which director Joe O’Byrne has adapted into a theater piece, now making its American debut at the Irish Repertory Theatre.

The task of conveying the atmosphere of the islands as well as portraying several of its inhabitants and setting out their personal stories falls to one remarkable actor, Brendan Conroy.

On a darkened set (lighting by director O’Byrne), Conroy snatches one’s attention with his unique delivery; he almost devours each word, savoring the text as if it were a tasty feast.

Initially, the narrator (apparently in the person of Synge himself) makes plain the severe physical situation of the islands. The skies are gray, the rain is almost constant; it is cold and wet and unwelcoming. How can such a scene be set for anything other than drudgery and want?

‘The Aran Islands’ marks a notable contribution to the shelf of world literature.

As our guide gradually settles in, he gets to know some of the inhabitants and gains their trust. And with that trust comes an opening up of their hearts and souls. And stories pour out.

Loyalty to one another is key. The people have their own brand of law and justice. When a young man murders his father, the people hide and protect him. The son has been punished enough already, one inhabitant remarks, for who would kill his own father unless there were no other solution to whatever the conflict had been? In spite of a diligent search by the authorities sent from the mainland, the young man remained safe. He was finally (funnily, I thought) sent off to America.

Eviction from one’s home was the direst event that could befall anyone. Therefore, the natives banded together and refused to expose the whereabouts of a home that was sought.

However, in one case, the son of one of the natives had become a turncoat and aided authorities to find a particular home. For that traitorous act, the turncoat was not only damned by the community, but his own mother denounced him publicly, a rare and profound event, particularly since family bonds were so valued.

The women of the area gather around the woman who has been evicted, her doorway now sealed with stones. They keen mournfully, burying their heads in their red petticoats. Conroy describes the scene so vividly that one can almost see it.

In fact, keening plays a big part in the grief process. For these people, the aspect of death is ever present. A funeral for a young man, dead before his time, was deeply experienced by the men and women of the area, and all participated in the burial rites.

As fishing was a major occupation, and most vessels in those days were far from seaworthy against the raging Irish Sea, most men felt they would die by drowning, sooner or later.

J.M. Synge is noted primarily as a playwright, with his “The Playboy of the Western World” arguably the jewel in his crown of works. Yet his “The Aran Islands” marks a notable contribution to the shelf of world literature.

One note in conclusion. The islands may have changed in many regards since Synge’s visit, but the warmth that I experienced on my visit indicates that strong fellow feelings continue over time and place: The proprietor of the bed and breakfast where I spent two nights, impetuously hugged me warmly, with tears in her eyes, as we said goodbye. It was as if she were saying, “We’ll never see each other again.”

This echoed a line in the current theatrical rendition of “The Aran Islands.”