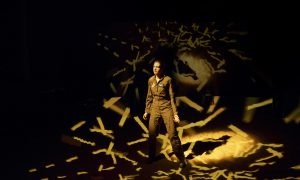 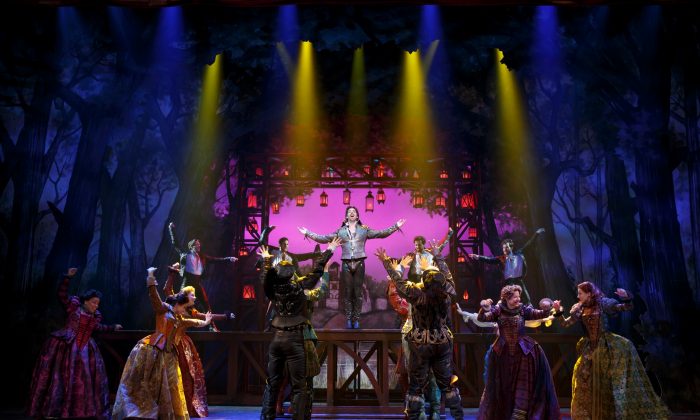 The Bard (Christian Borle) revered as something akin to a rock star, is surrounded by his adoring fans (the cast), in “Something Rotten!.” (Joan Marcus)
Arts & Culture

NEW YORK— When it comes to show business, the more things change, the more they stay the same, as the rollicking Broadway musical comedy “Something Rotten!” shows.

Creators Karey Kirkpatrick (book, music, and lyrics), John O’Farrell (book), and Wayne Kirkpatrick (music and lyrics) take potshots at the larger-than-life world of the theater, not shy at all about gleefully nipping and occasionally biting at the hands that feed them. Their jest succeeds particularly well when they occasionally soften the verbal slings and arrows with a bit of affection for their targets.

In South London, 1595, during that period now referred to as the English Renaissance, we find that art and culture flourish and, as the opening number notes, “everything is new.” True, the living conditions can be less than enviable; true, Jews aren’t allowed to be patrons of the arts; and true, the idea of a married woman getting a job outside the home is repellent to many, but on the whole, it’s an enlightened period.

It’s also a time when, if your name is not Shakespeare, it’s tough to be a playwright, as struggling scribes Nick and Nigel Bottom (Brian d’Arcy James, John Cariani) are all too aware.

The show is a love letter to the theater, even as it tries to skewer it at every turn.
The Bard (Christian Borle), as he’s called, is revered as something akin to a rock star, and almost everyone else fights for even a crumb of recognition. This situation frustrates Nick to no end, especially since he’s the one who suggested Shakespeare try his hand at writing in the first place—another shot of irony.

In desperation, Nick visits the soothsayer Nostradamus (Brad Oscar). (No, not that Nostradamus; this is his nephew Tommy.) Nick wants to learn about the future of theater, so he can be the one to create it.

Nostradamus informs him that the biggest thing in the theatrical world will be the musical, when performers suddenly stop talking and break into song and, at times, dance.

Armed with this knowledge—though at first unsure of the entire concept—and also learning that Shakespeare’s greatest play ever will be something called “Omelet,” Nick decides to write the work himself—as the world’s first musical.

However, Nick’s efforts at this new venture put him not only at odds with Shakespeare but also with Nigel, who may be the real writing talent of the family. Nigel, though, has other things on his mind at the moment, such as a pretty Puritan girl named Portia (Kate Reinders) with whom he has fallen in love.

Thus, also receiving a ribbing is organized religion, as represented by the Puritans and in particular, Portia’s father, the righteous Brother Jeremiah (Brooks Ashmanskas). In another ironic twist, it was the Puritans who would help bring about the end of the Renaissance when they sharply curtailed theatrical performances in England after they came to political power in 1642.

The Bard, as he’s called, is revered as something akin to a rock star.
The show also takes a look at the hypocrisy in people, showing how both Nick and Shakespeare are not afraid to “borrow” the words and ideas of others.

With an underlying message of “to thine own self be true,” something Nick forgets and must eventually be reminded of, the show is a love letter to the theater, even as it tries to skewer it at every turn.

Gleefully taking from both the Shakespeare and musical theater pantheons, “Something Rotten!” is filled with references to everything from Falstaff and Fosse to Shylock and Shakespeare in the Park. Students of theater would have a field day here trying to pick out all the theater in-jokes and references tucked into the script.

The entire cast is very good, with Borle, especially, stealing the show as Shakespeare, portraying him as a combination of Mick Jagger and Jayson Blair. His numbers “Will Power” and “Hard to Be the Bard” come across wonderfully.

Heidi Blickenstaff is enjoyable as Nick’s wife, Bea, an early advocate for women’s rights, with her number “Right Hand Man” working quite well. D’Arcy James and Cariani are good as Nick and Nigel, and Oscar does a nice turn as Nostradamus.

Theater Review: ‘Grounded’
Following in the footsteps of such works as “A Funny Thing Happened on the Way to the Forum” and “The Producers,” with a bit of “The Drowsy Chaperone” thrown in, “Something Rotten!” is a very enjoyable confection of low comedy, song, and dance with a gentle moral tossed in for good measure. Sometimes that’s all one needs for a good time.