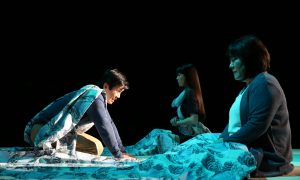 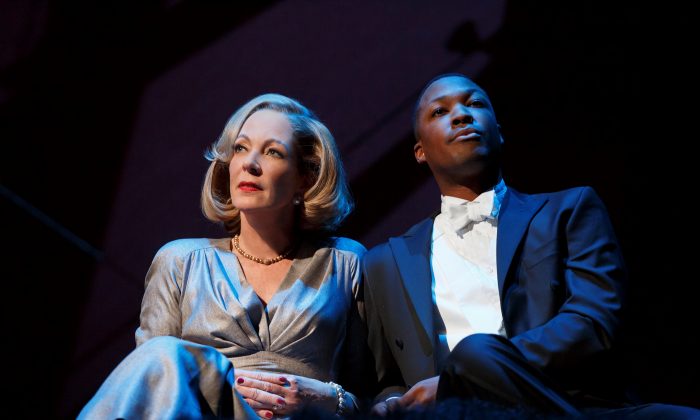 What we are willing to believe and why
By Judd Hollander

NEW YORK—There’s a fine line between believing the truth of a situation and wanting to believe it.  The powerful Broadway revival of John Guare’s 1990 drama “Six Degrees of Separation,” based on a true story, examines that fine line.

One night, in their comfortable New York apartment, husband and wife Flan (John Benjamin Hickey) and Ouisa (Allison Janney) and their friend Geoffrey (Michael Siberry) are interrupted by the sudden arrival of Paul (Corey Hawkins), a young man who has been attacked and stabbed. Brought in by their doorman (Tony Carlin), Paul claims to be a classmate of Flan and Ouisa’s children and, since he knew they lived nearby, this was the first place he thought to go.

Any serious attempt to judge the different characters is left up to the audience.

Paul knows many details about their family—down to the Kandinsky painting hanging in their home. Flan and Ouisa take him in, treat his wounds, and offer him a place to stay. However, as is soon discovered, just about everything Paul says is a lie, including his claim to be the son of the famous actor Sidney Poitier, who is working on the movie version of the Broadway musical “Cats.”

As the play unfolds, it becomes apparent that Paul doesn’t pull his scams with financial gain in mind—though he does begrudgingly take $50 when offered. Rather, he demonstrates an almost pathological need to be one of the “beautiful people” and enjoy the advantages he feels he would never experience otherwise.

Coupled with this need is Paul’s desire to see just how much he can actually get away with. It’s a weakness that ultimately backfires on him.

The entire play turns on the question of what people want to believe. Why would Flan, Ouisa, and their friends, who were also the victims of Paul’s lies, willingly accept this man into their homes without first checking with their children to see if his story is true? Paul claims to know all of them, after all.

The children’s eventual comments on the subject reveal more than a bit of contempt for their elders—not only in how their parents were so easily duped, but also in how they feel treated by them in general. Yet one has to ask if the kids would have been the wiser if Paul had targeted them.

An interesting irony is that the adults have an easier time relating to Paul than they do to their own children, which points back to the undercurrent that Paul’s stories are ones these adults want to believe.

As time goes on, though, and one sees Paul creating one story after another, the entire effect takes on a much more ominous meaning. This comes into play when Paul spins his tales for a young couple (Peter Mark Kendall and Sarah Mezzanotte) who can’t afford to lose what he takes from them.

More significantly, any serious attempt at judging the different characters is left up to the audience, rather than those on stage. We, just like the parents, are left to believe the best or the worst of people. This especially applies to Paul, who goes from affable to desperate as the play progresses.

Also coming into play in Paul’s schemes is the almost unspoken question of race as it applies to those in Flan and Ouisa’s circle. Would they have so easily welcomed an unknown black man into their homes if he were not in a suit and tie and continually dropping the names of their kids, and of his supposed lineage?

Janney is excellent as Ouisa, a woman determined to ensure this entire episode does not simply become an after-dinner anecdote. She demonstrates a deep passion to understand this man who comes from a world so different from her own.

Hawkins plays the role of Paul perfectly—a highly intelligent and driven, yet self-destructive young man who always sounds perfectly believable in whatever he says, even when it’s apparent to the audience what the truth really is.

Hickey does well as Flan, a man who just wants things to go back to the way they were.

Mark Wendland’s set is nicely done, with just the right mix of the tasteful and the ostentatious. Direction by Trip Cullman is strong; he ably blends both humor and tension, while never letting the characters seem anything less than real.

When all is said and done, “Six Degrees of Separation” will leave you asking if you’ll ever be able to trust others in the same way again. Even more importantly, should you?