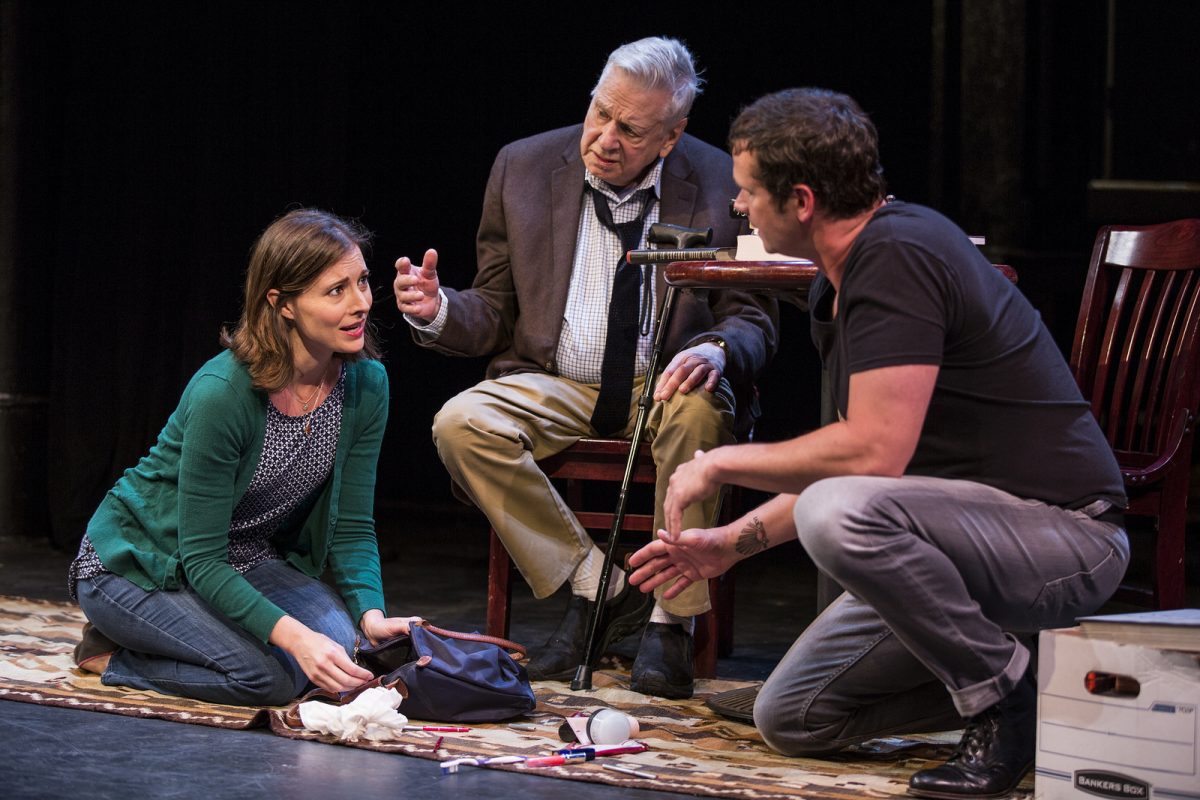 Are those claiming to be spirit channelers real or fake? The new off-Broadway play “Simon Says” may not convince you one way or the other, but it does generate some suspense.

The action takes place in the book-strewn living room of Professor Williston (Brian Murray), an elderly academic who lost his position for unexplained reasons. Some years earlier, he had taken in a boy named James (Anthony J. Goes) who had the gift of channeling, that is, conveying to our world the thoughts and/or energy of entities or spirits from another.

Williston, who is supposedly working on a book on reincarnation, is desperate for cash and charges for séances. At the beginning of the play, James had already decided to give up what he views as show business to try to lead a normal life.

James is furious when he learns that Williston canceled the tuition check that was supposed to pay for the young man’s first year in college. As James is about to leave, an attractive young widow named Annie (Vanessa Britting ) arrives. Her aunt had arranged for a session with Williston, but when the older woman became ill, she prevailed on Annie to substitute.

Annie decides to go through with the séance despite the fact that she is a high school science teacher and skeptical about reincarnation. In any event, she wants to establish contact with her husband, who died in a car accident.

James changes his mind and goes through with the channeling, and it’s something to behold.The young man goes into a trance, during which he becomes various characters of both genders over thousands of years and from different countries.

There is a 2,000-year-old mystery as well as some other loose ends that are all neatly resolved within the 90-minute play. One incongruity in the text is that all of the reincarnations, whether from ancient China or Judea, speak modern English.

When Anthony Goes as James goes into a trance and accesses past lives, the audience is transfixed.

The playwright, Mat Schaffer, holds a degree in Interdisciplinary Studies in Mysticism from Tufts University and seems to believe in the ability of channelers to communicate with the dead. One of Schaffer’s cited inspirations for the character of James is famed psychic Edgar Cayce.

The bottom line is that you don’t have to accept the premise of the play any more than the novels or movies of “Frankenstein” or “The Invisible Man” to have a good time.

The fact that the séance in “Simon Says” is suspenseful and convincing (for a while at least) is largely attributable to the skill of director Myriam Cyr, her accomplished cast, and the production crew.

Making his welcome return to the stage is Murray, completely convincing as the down-on-his heels, sickly academic.

As Annie, Britting conveys sincerity, even if the character’s disbelief in the paranormal fades rather quickly.

The virtuoso performance, though, is by the physically and vocally agile Goes. When James goes into a trance and accesses past lives, the audience is transfixed.

“Simon Says” may not be profound, but the production provides for a diverting evening at the theater.