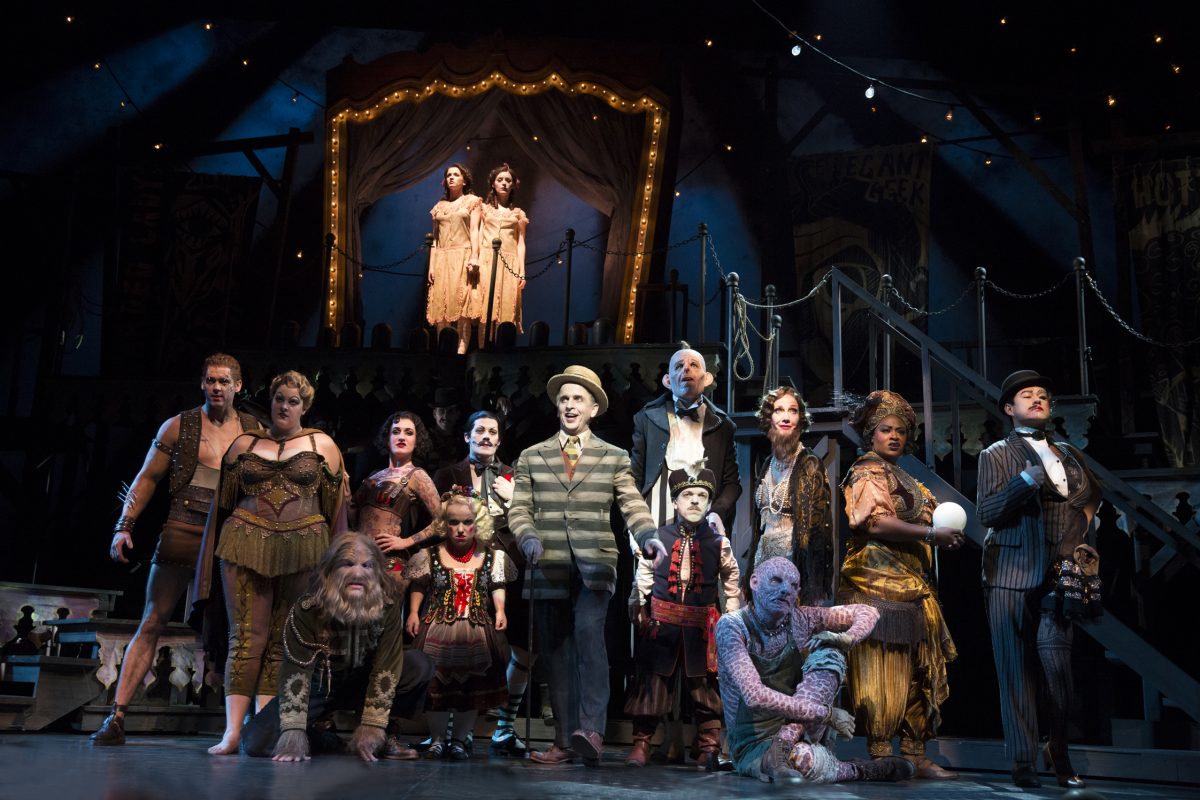 The cast of “Side Show.” (Joan Marcus)
Arts & Culture

Terry Connor (Ryan Silverman), a booking agent without a job in 1930s Texas, happens upon a traveling side show, a sort of home for those considered the freaks of society. The star attractions are the beautiful conjoined Hilton twins, Violet and Daisy (Erin Davie and Emily Padgett).

Terry sees the money potential in the pair. With the help of his friend Buddy (Matthew Hydzik), a dance instructor and performer, and Jake (David St. Louis), a side show roustabout secretly in love with Violet, Terry succeeds in freeing the twins from the legal control of their violent and alcoholic guardian, Sir (Robert Joy).

Soon the girls become the toast of the vaudeville circuit. However, they find themselves subjected to the same questions and stares they experienced while in the side show.

The girls are quite different in their personalities. Daisy is outgoing, flirtatious, and loves the spotlight, while Violet is introverted, insecure, and wants a husband and family. She dreams of leaving show business forever.

The love they have for one another prevents them from undergoing an operation to separate them, as one or both might die in the process. This danger may not be true, as the girls were told this story by some unsavory characters in their past.

The twins’ closeness is tested when Violet finds herself falling in love with Buddy, and Daisy starts to have eyes for Terry. Ironically, one of the things making the girls special to rest of the world may be the one thing preventing them from having what they believe they want most.

For a tale told on so broad a canvas, the piece manages to be quite intimate. Much of the credit goes to the show’s superlative score, although at times it almost overwhelms the dialogue. “Side Show” effectively asks just who the freaks really are, as well as shows the damage conformity can do.

The musical’s opening number “Come Look at the Freaks” perfectly sets the tone for what is to follow. Other good songs include “Feelings You’ve Got to Hide,” where the girls begin to feel the pangs of love. “Typical Girls Next Door” and “Ready to Play” are both done in connection to the duo becoming a vaudeville double act. The show also takes a swipe at Hollywood via the 1932 film “Freaks,” in which the real-life Hilton twins appeared.

Davie and Padgett are good as Violet and Daisy. Each actress is able to bring her character’s different personality traits to the fore, which ultimately shows them to be both women of courage and conviction. At the same time, they are terribly fearful of making changes within so they both can grow.

Hydzik is appealing as Buddy, an amiable all-around good guy, though perhaps not strong enough to handle the emotional baggage that comes with falling in love.

Silverman is good as the too-sure-of-himself Terry, a man determined to take the girls to the top of the exploitation ladder, while at the same time wanting others to sacrifice for his own happiness. The latter is effectively demonstrated in a magnificent sequence where Terry imagines possibilities of a future with Daisy alone.

It would have been nice to have a little more back story on Terry and Buddy, especially just what it was that got Terry into trouble in the first place, as well as the basis of the two men’s friendship.

St. Louis is brilliant as Jake, basically the show’s moral compass. Originally hired to care for the girls, he knows when to act to keep them safe and also when he has to let them go. St. Louis excels in “The Devil You Know,” a powerful number warning about the world beyond the side show. There’s also the poignant “You Should Be Loved,” where Jake makes his feelings known to Violet in the most heart-rending song of the show.

Elsewhere, Joy is quite good as the scheming and immoral Sir, and Blair Ross does well as the girl’s Auntie, who took the twins in as babies and later started the pattern of exploitation in their lives.

Bill Condon’s direction is spot on, helping to give the show a larger-than-life feel, yet at the same time keeping the story grounded in reality. Choreography work by Anthony Van Laast is excellent, especially when it comes to the ensemble numbers.

Sets by David Rockwell are very good, particularly in creating the side show atmosphere. Those particular scenes give a feeling of hopeless resignation. Costumes by Paul Tazewell are nicely done, with the gowns the girls wear during the vaudeville numbers being especially fetching.

A great story, brilliant score, and an appealing cast make “Side Show” definitely worth a visit—or three!