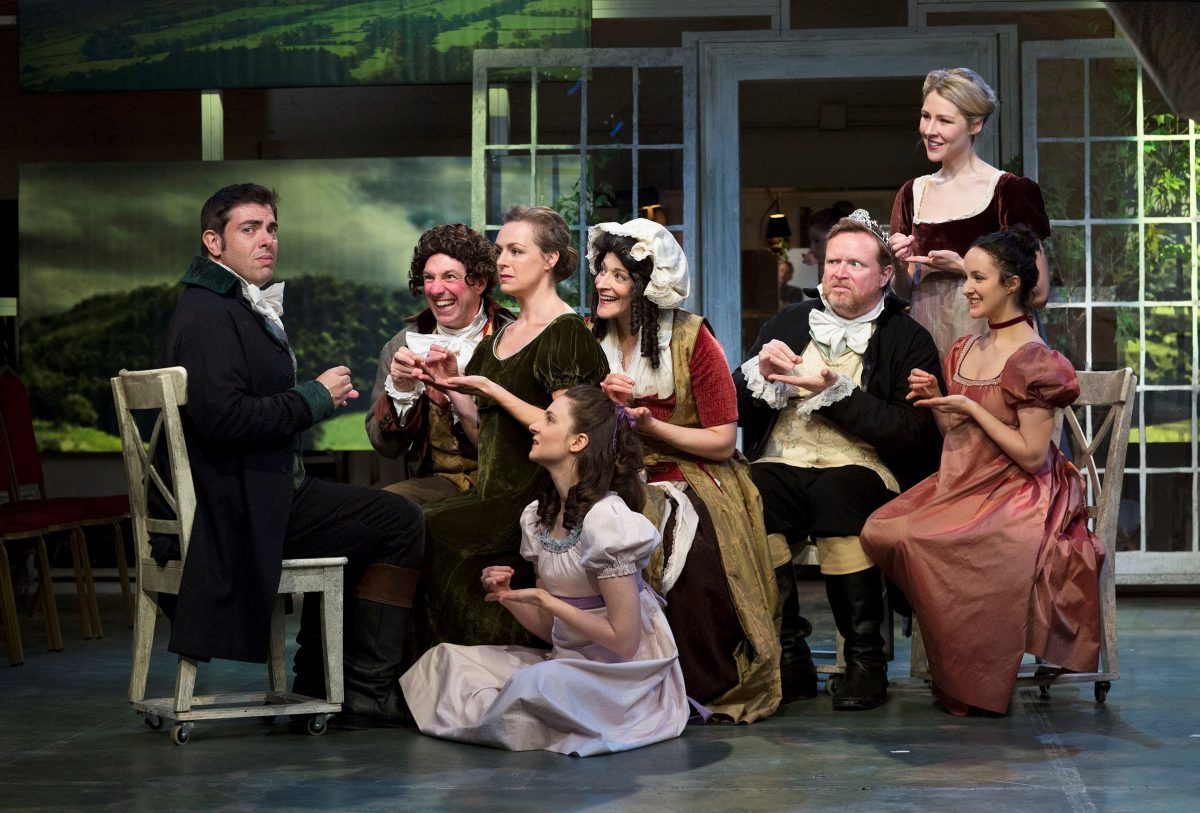 NEW YORK—Would 19th-century British novelist Jane Austen have recognized her “Sense & Sensibility” in the Bedlam theater adaptation now playing at the Gym at Judson in New York’s historic Greenwich Village? Probably not. But I suspect she would have loved it.

Utilizing Kate Hamill’s excellent adaptation, director Eric Tucker initially presents us with a personable company of actors—10 in all—dressed in contemporary street clothes. They then merge current social dancing with removing their outer garments to reveal—wonder of wonders—period attire. (Costumes are by Angela Huff.)

Simultaneously, their staccato moves develop into elegant period dances. And we are off and running. Or, I should say, off and rolling, for every set piece, from trellises to tables to chairs to bits of tree branches, is on wheels, adeptly moved into place by cast members. (The set design is by John McDermott.)

The long, narrow playing space is flanked on either side by the audience. As the playing area slides from one end to the other, it’s a bit like watching a football game. But a more aesthetic game is on hand here.

A whole family’s fate hinges on an unpleasant, unforeseen event. The recent death of the patriarch of the Dashwood family, John Dashwood (John Russell), has thrown its survivors into a state beyond despair. For they are, unhappily, all women: John’s widow, Mrs. Dashwood (Samantha Steinmetz), and three unmarried, hopefully eligible, daughters.

Hopefully eligible describes their state because there’s just no money, and what to do about dowries?—a must in polite society at that time, and sorely lacking here.

Nevertheless, Elinor (Andrus Nichols), the eldest and most sensible of the daughters, and the middle sister Marianne (the more emotional Kate Hamill) are wooed at various times by Edward Ferrar (Jason O’Connell, who also doubles as his gauche younger brother), John Willoughby (John Russell), and the proper Colonel Brandon (Carman Lacivita).

Margaret Dashwood (Jessica Frey), the youngest of the sisters, is at the moment not part of the passionate search for a mate.

Of course, because of the various and varied combinations of beaux, one senses that romance plays hardly any part if at all in the chase. Simply put, a woman must marry if she is to have any chance at a respectable or reasonably satisfactory life.

No wonder, then, the sometimes frantic arrangement and rearrangement of furniture, as if these tangible objects represented the emotional state of the young women as they go about their search for respectability. Some events even conclude in the ridiculous.

A woman must marry if she is to have any chance at a respectable or reasonably satisfactory life.

Director Tucker has come up with unique touches that keep the audience (and players) on their toes and always amused and interested.

Infused with speed, hilarity, and movement (choreography by Alexandra Beller), the production marks a delightful way to spend an afternoon or evening in the theater, now, in the hot summer months, and well into the fall.

Rounding out the cast are Laura Baranik, Stephan Wolfert, and Nicole Lewis.