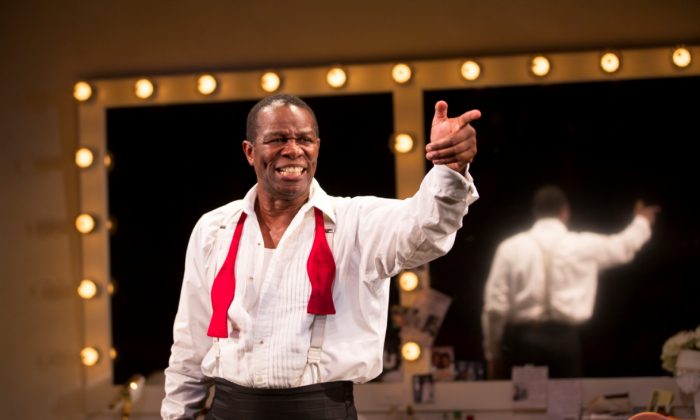 Theater Review: ‘Satchmo at the Waldorf’

NEW YORK—John Douglas Thompson is certainly one of the finest actors on Broadway or off. He has an impressive classical background with a plethora of Shakespearean roles under his belt, but his performance as Louis Armstrong and as Joe Glaser (his agent and mentor) is riveting in “Satchmo at the Waldorf.”

Thompson goes easily between the two characters as he records their story in his backstage dressing room at the Waldorf.

Behind the scenes of one of Mr. Armstrong’s final performances, he was obviously struggling with the illness that would take his life a few short months later.

The anger that was so apparent in Thompson’s portrayal had not been seen in Mr. Armstrong’s public persona previously, but author (and Wall Street Journal writer) Terry Teachout did serious research for his book “Pops, A Life of Louis Armstrong” upon which the play is based.

Mr. Teachout also wrote the script for this work, giving lie to the myth that theater critics cannot be real and or proficient playwrights. This behind-the-scenes view of Armstrong is based on fact, as is his relationship with Joe Glaser.

There was obviously a love-hate relationship between the two, with the anger taking front and center here. (The play is filled with scatological language, so don’t bring the kids to this one.)

The prejudice that Louis Armstrong suffered while rising to the upper echelons of stardom as one of the few African-American performers to succeed in a white dominated world is painfully apparent.

Armstrong can praise Joe Glaser in one breath and damn him in the next. He relies on Glaser to resolve his problems, whether personal or professional, but appears angry that he needs to rely on him.

Thompson never leaves the stage during the 90-minute play, which is performed without intermission. As a one-man show, filled with dialogue, this is a major feat.

The excellent direction by Gordon Edelstein has given focus to this explosive yet moving snapshot of Louis Armstrong’s last days.

You will see a Louis Armstrong that you have probably never seen or been aware of before.

John Douglas Thompson does not play the trumpet, which might have been expected, but that element is not at all missed as his performance is compelling. He delivers a theatrical tour de force!

Nanci Callahan is the managing director and founder of the West Side Cultural Center.