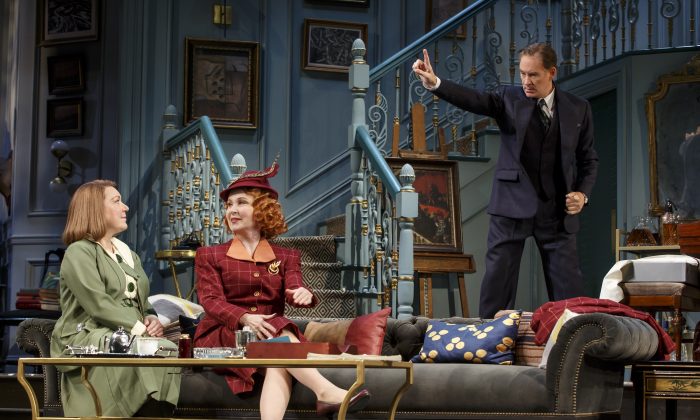 Kevin Kline, charming as ever
By Diana Barth

NEW YORK—A slight change in the punctuation of Noël Coward’s work “Present Laughter” might result in “Present: Laughter”—and in this case the present, or gift, would be the presence of a great farceur and physical comedian, Kevin Kline. His current stint is to be seen in director Moritz von Stuelpnagel’s hilarious production at the St. James Theatre on Broadway.

Few performers can appealingly merge clumsiness and grace—Kline exhibits a cross between the body language of a Charlie Chaplin and the wit, say, of a Rex Harrison.

Here, Kline plays gracefully aging matinee idol of the theater Garry Essendine, who is never lacking companionship—mainly female—nor a witty retort to whatever slight he may get or difficulty he may encounter.

Kevin Kline returns to Broadway after almost a 10-year absence.

From his entrance, when he manages to somehow get entangled with the bannister of his two-level boho chic London flat, to his suave encounters with the women in his life, Kline as Essendine takes the stage and wraps it around his little finger.

Our hero, surrounded by a coterie of supporters and admirers, complains that he is suffocated by the presence of so many people, yet when alone, mourns his alleged loneliness.

His chosen family includes his girl Friday-secretary, Monica Reed (Kristine Nielsen), who, with an air of gentle cynicism, easily manages Garry’s snits and (to him) reasonable demands.

Although his wife, Liz (Kate Burton), hasn’t been a part of his intimate life for some time, she is always present when a crisis looms, which is frequently.

Also very much a part of Garry’s life are his director, Morris Dixon (Reg Rogers), and his producer, Henry Lyppiatt (Peter Francis James), whose drop-dead gorgeous wife, Joanna Lyppiatt (Cobie Smulders), helps thicken the plot. She forgets her latchkey one evening and has nowhere to turn other than Garry’s flat, as had an earlier, much younger, starry-eyed visitor, Daphne Stillington (Tedra Millan). Garry’s spare room serves a useful purpose for such visits.

Joanna, looking every inch the glamorous femme fatale in a slinky satin evening gown, appears to have a love-hate relationship with Garry, telling him that he’s “the most charming, infuriating, passionately attractive man” she has ever known. To the flatteringly ruthless assessment, Garry agrees by simply arching one eyebrow.

In between listening to others’ assessments of his character, he finds time to “modestly” glance at his image in a nearby mirror.

But there’s a burning project in the offing: Garry is in the midst of preparing for an imminent trip to Africa for a theatrical tour of six plays in repertory, and he’s just lost his leading lady to an accident. The only actress available to take over the role is someone Garry abhors.

Furthermore, the steady stream of visitors is getting on his nerves. One such visitor, who manages to crash the not-very-well-guarded gate manned by the watchdog butler Fred (Matt Bittner), is wannabe playwright Roland Maule (Bhavesh Patel).

Maule insists that Garry’s trite, “superficial, frivolous” theatrical offerings are only about making money, to which Garry replies that plays should be actable. After glancing at Maule’s play, Garry suggests that the aggressive and delusional young man write 20 plays, and if the 21st can get a hearing at a Sunday night performance, he should be grateful.

Coward, who wrote the play with himself in mind and initially played Garry, is apparently voicing his own views on theater, commercial and otherwise.
Kline, here returning to Broadway after almost a 10-year absence, has a field day preening as the egocentric star who never ceases acting, even in his own living room. No wonder he pleads exhaustion.

The supporting company, which includes Ellen Harvey as Miss Erikson, the blasé Swedish cook with an ever-present cigarette dangling from her lips; and Sandra Shipley as Lady Saltburn, Daphne’s overbearing mother, gives top-drawer support to the egomaniacal yet often melancholic man who has everything, yet never ceases complaining about his plight of plenty.

Terrific costumes by Susan Hilferty and a fabulous set by David Zinn round out the visual picture for this delicious production, which unfortunately has a limited run. Make a point of getting a ticket.