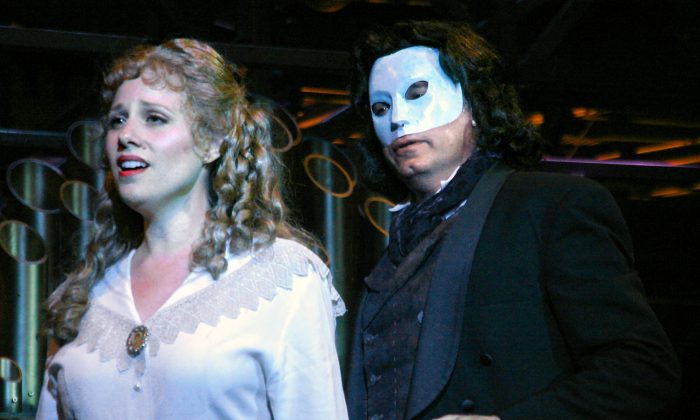 The other one, is fantastic

MUNSTER, Ind.—Don’t think of theater when you think of Indiana? Think again.

Only 30 minutes from downtown Chicago, this show billed as "The most successful musical never to play Broadway"—this other " Phantom" by Maury Yeston and Arthur Kopit (Indians, Wings, Nine,) is, well, its about the best theater I’ve seen in a long, long time.

This script tells a truly touching story and deals with love in a much greater way than other versions of “Phantom of the Opera.” The character of the Phantom, based on the novel by Gaston Leroux, has been portrayed in movies as a monster of sorts, but Kopit and Yeston have made him more human. He lives in the catacombs of the Paris Opera, falls in love with the voice and beauty of Christine, and drama ensues when a scheming diva, Carlotta, attempts to sabotage Christine’s opera debut.

In addition, the music in this version outdistances Andrew Lloyd Webber’s: It is more powerful and fitting to the storyline. Theater devotees refer to this version as the smarter “Phantom.”

Andre LaSalle's stunning set includes the stage rising above the audience to let us in to the Phantom's living quarters, add the stairs and ramps, and this set is breathtaking. The costumes by Myron Elliott are beautiful and appropriate; the choreography by Linda Fortunato, marvelous; and the direction by William Pullinsi (who was in fact, the first director to stage this musical back at Chicago’s Candlelight Theater) combine to make this this is one of the best productions I have ever seen.

The cast includes Larry Adams, who has played the Phantom before, and whose powerful voice makes Yeston’s music come alive. Johanna McKenzie Miller is a stunning Christine and while her voice is not operatic quality, her character is truly lovable. Marilynn Bogetich is a strong Carlotta, and David Perkovich as her husband plays his comic role just right. Jim Sherman (in the Theatre Building production as well) handles the role of Gerard Carriere with verve as we learn more about how the Phantom became the "ghost of the Opera House."

By the final duet "You Are My Own," the audience should have tears welling in their eyes.

The story is better, the music is solid and the cast is strong—what more can one ask from a musical?

Alan Bresloff writes theater reviews in and around Chicago.