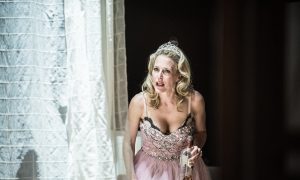 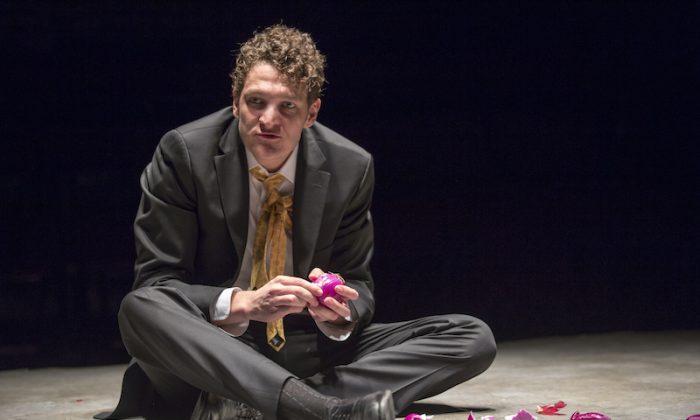 Forever seeking ways to satisfy self
By Diana Barth

NEW YORK—It’s difficult to equate Henrik Ibsen’s “Peer Gynt” with his later realistic social dramas such as “A Doll’s House” and “Ghosts,” to name but two. However, John Doyle, as director and adapter of the version of “Peer Gynt” now playing at the off-Broadway’s Classic Stage Company, has pared down Ibsen’s original five-to-six-hour version to less than two hours. The result brings to mind the onion that is peeled away by the eponymous Peer (Gabriel Ebert) as he seeks to find the ultimate kernel that may express his real self, which he has sought a lifetime.

The opening scene is arguably the most dramatically staged and, therefore, the most involving of the evening. Here, the glib but charming Peer entrances his Mother (Becky Ann Baker) with a tall tale of how he has ridden and tamed a wild stag on a mountaintop. She finally comprehends that he has deceived her but cannot resist her son’s imaginative tales.

Peer goes on to steal a Bride (Jane Pfitsch) on her wedding day. The Bridegroom (George Abud) threatens Peer, but Peer is able to get free and is made an offer to become a Troll (two are portrayed by Dylan Baker and Pfitsch). Feeling he has too much to lose by making that commitment, Peer again flees.

Peer travels the world, portraying a variety of characters: He will be emperor of the world someday, he insists. He roams from snowy Norway to the North African desert, then to the sea, becoming at one time a wealthy slave trader. He thinks only of himself and his own pleasure.

He meets the lovely and loyal Solveig (Quincy Tyler Bernstine), who promises to wait for him no matter how long he stays away from her—for he cannot stay in one place for very long. Someone has advised him: Go about. Keep on the move, make no commitments.

Peer constantly seeks his identity: Who is he, truly?

He never really finds out. He is finally confronted by the Button Molder (Adam Heller, listed in the credits as The Undertaker), whose job it is to melt down into buttons people who never attain their identity, or who never make worthwhile commitments—the nonentities of the world.

Panicky, Peer turns to the one person who might save him. It is Solveig, who, true to her pledge, reveals that his true self lies in her “faith, hope, and love.”

Is the play saying that those who never make commitments, who are never responsible to anyone or anything but themselves and their own selfish desires will forever be dissatisfied? Or more potently, will such people ever be in emotional pain or turmoil? Perhaps each viewer can best answer those questions for him or herself.

Director Doyle, who is slated to take over the artistic directorship of the CSC, is noted for his minimalist productions. His current “The Color Purple,” now enjoying a successful run on Broadway, is a case in point.

However, in the case of this production, more might have been more. I missed the section, deleted here, of Anitra the beautiful Arabian woman and her seductive dance; nor does Solveig sing her song.

Performances are fine, with an outstanding contribution by the energetic and athletic Gabriel Ebert.

Diana Barth writes of the arts for various publications, including New Millennium. She may be contacted at diabarth@juno.com