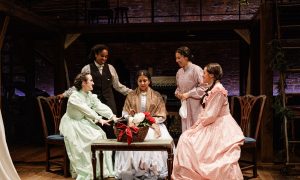 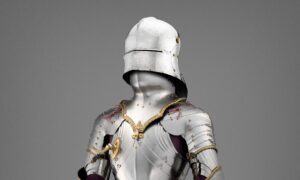 Meet Maximilian, 'The Last Knight,' at The Metropolitan Museum of Art
0 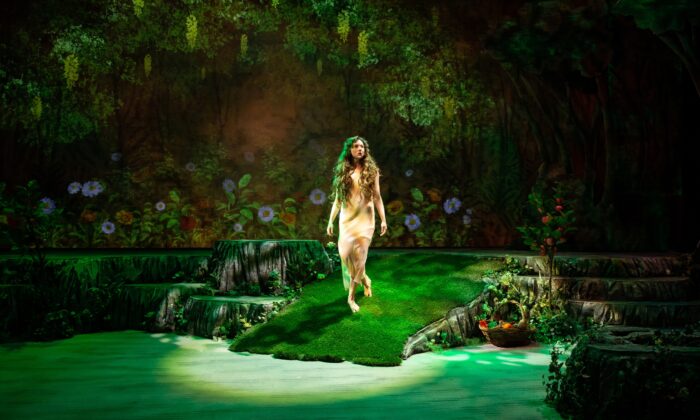 Eve (Marina Shay) seems very much like us, in the Fellowship for Performing Art’s production of Tom Dulack’s “Paradise Lost” at Theatre Three at Theatre Row. (Jeremy Daniel)
Performing Arts

Theater Review: ‘Paradise Lost’: We Would Have Lost Paradise Too

NEW YORK—From the opening exchange between Satan and Beelzebub, Tom Dulack’s script captivates. Dulack’s take on “Paradise Lost” proves that human nature never changes, and that John Milton’s work, perhaps even more than that of Shakespeare, is as relevant as it was when he wrote it.

Milton’s “Paradise Lost,” which was published in 1667, is arguably the greatest work in the English language. The great English writer Samuel Johnson ranked the epic poem about Lucifer’s rebellion, banishment from heaven, and temptation of Eve as “amongst the highest productions of the human mind.”

Who would dare attempt to interpret this monolith as a witty, pithy, modern stage production that runs for only one hundred minutes?

Fellowship for Performing Arts (FPA) would. The nonprofit New York City-based company founded by Max McLean, who is also the artistic director, that’s who.

On the Saturday I went to the matinee, I sat next to a sophisticated Long Island theatergoer who sees at least three productions a week. She wasn’t there for the Christian message, and it didn’t bother her that Milton’s epic work was about original sin. It was the production value and acting that interested her.

We gazed at the stage set in approval. John Narun’s projection design features, as a backdrop, a replica of Michelangelo’s “Creation of Adam” from the Sistine Chapel ceiling. There are flowers and bowers of trees and a soundtrack of birdsong. Two small trees parenthesize the stage; the one, of course, is the tree of the knowledge of Good and Evil.

When the house is plunged into darkness, the audience is assaulted by—skewered on—lighting and sound. Smoke swirls in a sinister fashion from boiling lakes. There are blasts of trumpets and snatches of Baroque-sounding choirs. From Mephistopheles? The set designer Harry Feiner transmogrifies the scene from an idyll to a hell.

As though a clapperboard has come down, there is Stygian blackness, an almighty crash of thunder and lightning. Any fillings in one’s teeth are rattled. Slowly we see a figure emerge—Lucifer. He is wearing a scorched and stained World War I British Army officer uniform. Red epaulettes and decorations are tattered; still he has a kind of awful charisma.

Then our eyes are drawn to his sidekick Beelzebub. Beelzebub, built like a fire hydrant, is a Joe Pesci character.  He wears the battledress of a Roman legionnaire. One of his wings appears to have been amputated. He rips it off and collapses. They have been falling for nine days through darkness and chaos.

Finally, “You said it would be easy,” Beelzebub says accusatorily. “This is not my idea of easy. Jesus!”

“Don’t you ever say that name again! Do you hear? Never again!” roars Lucifer.

So begins the dialogue of a failed leader and his disgruntled minion. The acting and direction of the production are congruent with the quirky and, in flashes, brilliant script.

Max McLean, founder and artistic director, writes in the program notes: “Given that we live in a culture whose primary grand narrative is that there is no grand narrative and that people are increasingly dismissive of Christianity, FPA’s mission is to put forth a vision of Christianity through artistic expression that is imaginative, multilayered, and convicting so that it offers a counterpoint to the prevailing worldview.”

Art and the theater give us a little more wiggle room to say things within an engaging theatrical experience that otherwise could not be said.

FPA has cannily selected works and themes from great authors that are nuanced, multilayered, and relatable to audiences from all faiths or none at all.

One seasoned critic writing for the Times Square Chronicles, who describes himself as a “Jewish atheist,” declared that “FPA’s stuff is worthwhile seeing, discussing, and even recommending.”

Tom Dulack, who is an award-winning playwright, novelist, and professor at the University of Connecticut, along with director Michael Parva, has transformed this epic into an accessible, astonishingly relevant story of Lucifer’s rebellion and the temptation of Adam and Eve in the Garden of Eden.

Critics may carp that Dulack’s play lacks the poetry, as well as those elements that made this epic controversial in the 17th century: rejection of the divine right of kings, rejection of divorce, and so on.

Such criticism is nonsense. Milton’s blank verse cannot be parlayed into witty dialogue. (Who of us has even read the entire work?)

Instead, Dulack has the characters speak in the current vernacular and sets out to explore a less-ventilated aspect of the Fall of Man.

Why, given all the gifts she had in the Garden of Eden, did Eve take the route she did and disobey, despite an intuition that her decision would have catastrophic consequences.

Dulack’s thoroughly contemporary understanding of humankind is timeless and truthful. The excellent cast of Tony nominees and Broadway veterans bring foibles and flaws to the fore.

David Andrew Macdonald as Lucifer has a résumé like hallmarked caviar. Shakespearean in his training, his TV credits include a decade as Edmund Winslow in “Guiding Light.” Lou Liberatore, who plays Beelzebub, is also in possession of a dense and impressive résumé, as is Mel Johnson Jr. who plays Gabriel.

Robbie Simpson and Marina Shay are Adam and Eve. Their relationship dance mirrors what transpires between a young man and a young woman who are newly in love. Eve is mind-wateringly pretty, and Gabriel warns Adam: “Her beauty must not become a snare to befuddle your clear thinking.”

Of course it does.

When she goes through her “Poor Lucifer (she prefers not to call him Satan), surely the Almighty could forgive him,” etc., etc., Dulack might be writing for those whose compassion is worn on their sleeves but not in their hearts. This is certainly timely.

Alison Fraser (Sin) is a two-time Tony Award nominee. She delivers a wry and witty performance. She looks like Magenta of “The Rocky Horror Picture Show.” With hair like exploded armchair springs and horsehair coiling down to her waist, she is tightly corseted and wears a skirt adorned with what appear to be entrails and snakes.

She appears onstage riding a motor scooter and tooting a noisy klaxon. She is hugely amusing, though her crudity infuriates Lucifer, who has been tasked by rebellious angels with seducing the (almost) virginal Eve.

“You go back to hell empty-handed and they will cast you out!” Sin predicts. “They will appoint Ball-zebub in your place. You who would not bend your knee to the Messiah will spend eternity on your knees kowtowing to that imbecile! And I will personally make sure you don’t draw a single breath without wishing that the Almighty had not created you in the first place!”

Beelzebub asks, “Is that you?”

Sin’s response is “Yeah, it’s me Boobaloo. You were expecting maybe a third person of the Trinity?”

A Breath of Fresh Air

These portrayals of good and evil are invigorating. After all, conservative, someone said recently, is the new punk.

Add to that a general zeitgeist in which those who believe in a god, any god, are generally the objects of contempt—a small miracle, no bigger than the fist of Elijah’s hand—is to be seen in FPA.