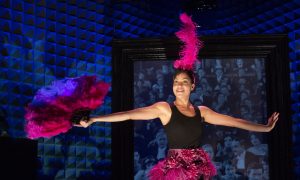 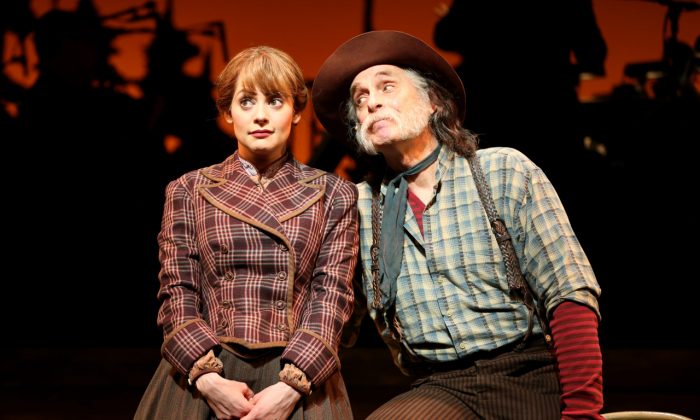 NEW YORK—”There’s gold in them thar hills,” as the recent Encores! production of the 1951 tuner “Paint Your Wagon” (book and lyrics by Alan Jay Lerner, music by Frederick Loewe) amply demonstrated. While the production may not have represented the mother lode in terms of musical theater, it was certainly a rollicking and enjoyable experience.

The story is set in the days of the California Gold Rush (middle to late 1800s), in a place called “Rumson’s Creek,” so named because miner Ben Rumson (Keith Carradine) laid claim to the gold found there, through some rather unusual circumstances.

As word of Ben’s strike begins to spread, miners from all over start to arrive and soon there are approximately 400 men in the area. The only woman nearby is Ben’s daughter, Jennifer (Alexandra Socha), who has traveled with him since she was 3. Now that she’s just turned 16 and has reached the age of “maternity,” as she puts it, she’s beginning to cause some problems among the love-starved miners.

Ben’s solution is to send Jennifer back East, but before that can happen she finds herself falling in love with Julio Valveras (Justin Guarini), a Mexican miner with big dreams for when he eventually strikes it rich.

Big dreams is the central theme in “Paint Your Wagon.” The opening number (“I’m On My Way”) shows men from all walks of life leaving their homes and in some cases, loved ones, in a seemingly never-ending search for gold.

But having big dreams and being able to act responsibly enough to achieve them do not always go hand in hand, especially when temptations such as whisky and women are thrown into the mix. One conversation between two miners who’ve lost all their money in such pursuits hits home on this point.

The chance to see these numbers performed, often with winning choreography by Denis Jones, made the show more than worth seeing.
Part and parcel within the goldfields are the harsh conditions and terrible loneliness, beautifully brought to life in the haunting “They Call the Wind Maria.” The song is just one of the brilliant Lerner and Loewe gems comprising the score.

The chance to see these numbers performed, often with winning choreography by Denis Jones, made the show more than worth seeing. One particularly enjoyable sequence occurred when a dance hall and saloon opens in town. When dancing girls soon follow, the women literally knocked the miners off their feet as they’re welcomed with open arms.

Other good songs included the ballads “I Talk to the Trees” and “Carino Mio,” both sung by Guarini and Socha; and the very enthusiastic “There’s a Coach Comin’ In,” which announced the girls’ arrival in the town.

The method used to display the coach initially is something similar to the way Encores! handled the flying of the title character in “It’s a Bird…It’s a Plane…It’s Superman” a few years back.

The 1969 movie version of the show went out of its way to make Elizabeth a much stronger and more independent woman than seen here.
By the time the dance hall girls arrive, they are not the only new women in town. Earlier, Jacob Wooding (William Youmans), a traveling Mormon farmer, passed through with his wives Sarah (Melissa van der Schyff) and Elizabeth (Jenni Barber), and was persuaded by Ben and the other miners to auction off one of them. Elizabeth is put on the market.

This whole sequence regarding the treatment of women, including a moment where Elizabeth quite willingly displays herself (fully-clothed) for examination to the miners before they bid on her is perhaps one of the reasons the musical isn’t done often. Indeed, the 1969 movie version of the show went out of its way to make Elizabeth a much stronger and more independent woman than seen here.

The acting was excellent. Carradine did a fine job in personifying the American prospector, a genial, but ne’er-do-well sort, going from one gold strike to the next, always on the move and never putting down roots. It’s a feeling he put across masterfully in the song “Wand’rin’ Star.”

Ben probably isn’t the best choice for a husband—a point made clear more than once in his attitude towards Elizabeth and in the song “In Between.”

Socha had fun with the comic “What’s Goin’ On Here?” which addressed the subject of Jennifer no longer being just one of the boys in camp; and she also did very well with the poignant “How Can I Wait?” as Jennifer tries to understand her growing feelings for Julio.

Guarini did well as the proud Julio, determined to make enough money to buy a ranch of his own, while being bitter at the way life has treated him. Julio not only feels prejudice from the rest of the miners because of his ethnicity, but also because the land he’s working once belonged to Mexico.

Barber was fun as Elizabeth. While the character doesn’t have much depth, Barber was very good in the comic number “Trio.” The song revealed what she, Jacob, and Sarah really thought of each other and their situation.

Theater Review: ‘Josephine and I’
The Lerner and Loewe score, brilliantly presented by the Encores! Orchestra, and conducted by the show’s music director Rob Berman was, as mentioned earlier, quite simply superb. Direction by Marc Bruni was strong, allowing each of the characters to come across, if not always quite fully formed, at least interesting to a degree. Lighting by Peter Kaczorowski worked beautifully in helping to add to the feelings of emptiness and the expanse of the wide open spaces when called for.

If there’s a problem anywhere in the production, it would have to be with the book. The original was somewhat revised for this concert adaptation by Marc Acito. It felt a bit disjointed so that one songs jumped too quickly to the next, with not enough plot or dialogue between them. One such example of this rushed feeling occurred with “Whoop-Ti-Ay,” taking place moments after Elizabeth had been sold to the highest bidder.

A not-too-realistic look at days gone by, “Paint Your Wagon” is a wonderful tip of the hat to the American dream, a great deal of fun, and a work which will hopefully pop up on the stage again sometime soon.