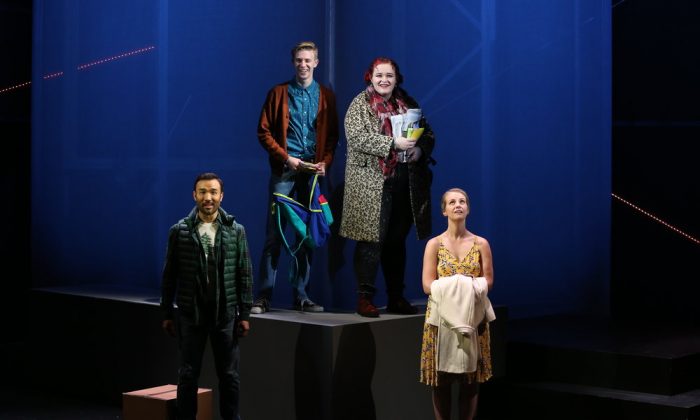 NEW YORK—”Ordinary Days,” fittingly classified as a chamber musical, with music and lyrics by Adam Gwon, was first produced by Roundabout Theatre Company as part of its Roundabout Underground series in 2009–10.

Now, Keen Company has resurrected it, in a somewhat upscale manner, giving it a full-scale off-Broadway production at the Clurman Theatre on Theatre Row. Here it sports a three-piece band, with John Bell at the helm. Under Jonathan Silverstein’s overall direction, the production features a quartet of attractive singer-actors.

All four characters, on the youngish side, are new to the rather scary scene of what it means to find one’s way in The Big Apple: the place where so many come to “make it.” And, more often than not, don’t.

For a living, Warren (Kyle Sherman) passes out flyers for a downtown artist. Warren himself is a budding artist, but he has no time to pursue his dream. Passing him by is the hurrying Claire (Whitney Bashor). Aren’t New Yorkers always in a hurry?

Then there is Deb (Sarah Lynn Marion), a graduate student who has lost her thesis somewhere. Born and raised in what she describes as a “cul-de-sac,” she has come to New York to live her dream, though it’s not clear what that may be.

Most of her time is spent trying to find the lost thesis, for her professor-mentor will permit no extensions of deadline. Deb is despondent, as the book’s permanent loss might result in her having to return to the hated cul-de-sac.

As luck would have it, however, Warren finds the thesis, makes contact with Deb, and they agree to meet up in The Metropolitan Museum of Art. Monet, Manet, does it matter? It sure does, supplying some harrowing but comedic moments.

The plentiful songs are tuneful and satisfying. Arguably, the most powerful number, sung by Claire near the end of the show, is “I’ll Be Here.” In fact, the marvelous Audra McDonald sang this song in her Carnegie Hall concert in 2011.

The performances are not earth-shattering, but nice. The real star of the show is its creator, Adam Gwon. One is advised to watch for future artistic developments of this young composer and lyricist.

Diana Barth writes for various theater publications, including New Millennium. For information, contact her at DiaBarth99@gmail.com