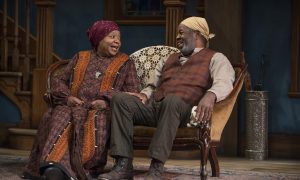 Theater Review: 'Gem of the Ocean'
0 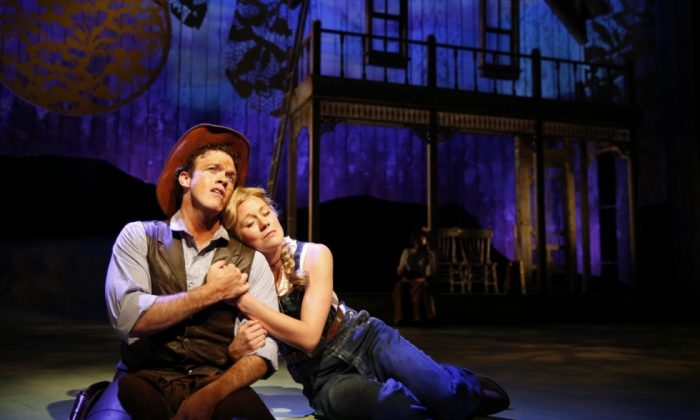 AURORA, Ill.—Every once in a while a show gets reinterpreted in a way that adds needed clarity or perhaps restores needed clarity. In the hands of Paramount Theatre director Jim Corti, the classic musical “Oklahoma!” has accomplished that and more.

I knew that “Oklahoma!” revolutionized musical theater when it first appeared in 1943, but thank you, Mr. Corti, I finally get all the fuss. I finally get it.

Laurey has a soul as big, as hungry for life, as the open expanses that spawned her.

I’m talking about understanding the musical in a dramatic sense. Here all the pieces fit together, the images work together; the tensions mount, accelerate, ping, and then melt away.

How was this accomplished? In one sentence: This story is all about Laurey (Allison Sill), a soul as big, as hungry for life, as the open expanses that spawned her.

I’ve seen demure Laureys, feisty Laureys, but never a Laurey who had huge issues at stake, so past shows often felt like fluff and only a vehicle for beautiful singing.

But here Laurey is angry—not coyly angry—really angry, and we don’t know why. Heck, she doesn’t know why herself, and that’s what she’s got to figure out. And it’s a revelation for us.

Funny that a show set in the wild open Oklahoma territory has its protagonist feeling trapped, but that’s how Laurey feels—even as we sense the vastness of the era, a time before the open land got parceled into farms.

We meet that vastness first in the music. The orchestra (directed by Tom Vendafreddo) plays the overture—a rarity in new works these days—which allows us the luxury of sitting and just listening.

Then from behind us, comes the huge voice of Curly (Colte Julian), singing about that glorious morning as he strolls up the aisle. My, the size of it all!

Curly ambles toward the sunny-looking framed house (designed by Scott Davis) with the sky awash in blue (designed by Greg Hofmann). He meets the house’s matron, big-hearted Aunt Eller (Caron Buinis). But he’s not looking for her. He’s waitin’ on Laurey.

Laurey believes she will feel trapped by marriage.

Except for her aunt, Laurey lives alone. She owns the farm and is doing a good job of running it in this large country. She could model her life on her rough and tumble but well-respected Aunt Eller. Or, Laurey could marry.

Yes, Curley’s come a-courting, and he expects that she’ll just fall in his lap because he’s a good-looking, good-natured cowboy.

But Curly’s assumptions infuriate Laurey. In fact, if she marries him, he gains substantially, and she loses. When she marries, if she marries, she loses her property rights to her husband. (That fascinating bit of information is supplied in the director’s notes.)

So, irritated with Curly, Laurey impulsively takes up Jud’s (Peter Saide) offer to escort her to the box social.

Hired-hand Jud, also yearning for Laurey, is an outsider who relies on girlie pictures to get him through his isolated life.

Some interpretations of “Oklahoma!” use the notion that Laurey may be drawn to Jud’s powerful sexuality. That’s not the case here. Here, he’s played as pitiful, alternately craven and passionate. Less than appealing to her, Jud appalls her.

Katie Spelman’s amazing choreography for Laurey’s dream makes clear that Laurey believes she will be trapped by marriage, whomever she partners with.

Can, then, Laurey resolve this issue? Yes, but only after Curley stops blustering, proves he not only talks big but acts it, and lets his heart truly speak.

There’s only one moment near the very end of the show that doesn’t work for this reading of the script. But I wouldn’t for the world trade off the passion in this production to resolve that scene.

It’s the actors who make the idea work. From the above-mentioned leads to the fine ensemble of dancers who sing or singers who dance (at times it was hard to tell which was their weakness), all provided accomplished verve.

Of course, the comic actors, Lillie Cummings as Ado Annie, Carl Draper as Will Parker, and Kareem Bandealy as Ali Hakim, play broader characterizations, but they all blend into the same world of the more serious plot.

The very reason this production succeeds so well is the fact that the acting comes first and singing second. But this leads to a danger for singers: I heard a few tired voices and some forced singing at times, certainly unnecessary because “everything’s up to date …” at the Paramount with body mikes aplenty.

Other mention should be made of Theresa Ham’s wonderful costumes. Her designs of the suede brown chaps for cowboys, and the lovely, detailed, mostly sensible wear for the gals were understated and fresh. She must have raided a quilting store for the dresses.

Oh, and congratulations to the Paramount Theatre for its 16 nominations and five wins of the prestigious Joseph Jefferson awards. The far-west suburban theater hasn’t been on the scene very long, but it keeps knocking Chicago’s socks off.