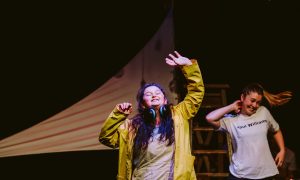 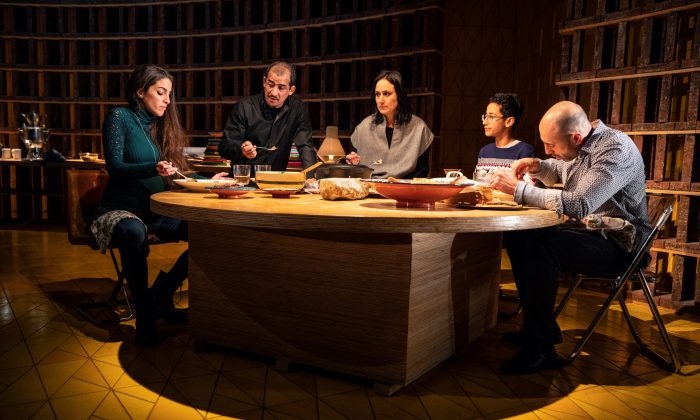 NEW YORK—Actor and playwright Heather Raffo has created an Iraqi family that has come to New York and put down roots. Or, after eight years of residence, at least they’re still working on it.

Apparently quite successful, judging from what Andrew Lieberman’s simple set implies, Noura (Raffo) works as an architect in New York, and her husband Tareq  (Nabil Elouahabi) is caring and supportive. What then is the problem?

Noura is torn between two cultures. Should she forget her Iraqi roots and throw herself into the American way and its standards? It’s a delicate balancing act, as she tries to straddle both worlds.

The play is set at Christmastime, which gives Noura the opportunity to display her cooking skills with traditional Iraqi fare, seen onstage. A Christmas tree also looms in the background.

Noura’s teenage son Yazen (Liam Campora) is quick to adjust to anything and enjoys current American games, such as a PlayStation. Noura fusses over him, as does a caring mother anywhere, particularly in one scene where she helps him into a traditional Iraqi costume.

It is Tareq who has struggled more than Noura, for he was a surgeon in his own land and here must settle for a status at the lower level of the medical profession.

But he is determined to be assimilated. He has renamed the family with American names: Nora for Noura, Alex for his son Yazen, and Tim for himself.

Also present much of the time is old family friend Rafa’a (Matthew David), who’s been able to become an obstetrician here.

Though in conflict, Noura retains her composure until the family is visited by a young Iraqi woman, Maryam (Dahlia Azama), whom Noura has been sponsoring in her studies in America.

Tareq is offended by what he considers Maryam’s loose ways: She is pregnant but unmarried. But Noura defends the young woman.

We are treated to a rich performance by Heather Raffo, whose own personal background echoes Noura’s.

Under Joanna Settle’s detailed direction, performances are uniformly excellent, and the play has interest and power. In fact, it sometimes seems that too much complexity is packed into its brief, 90-minute playing time.

But “Noura” gives an interesting and novel view of an often-overlooked segment of America’s mixed culture.

Actor and playwright Heather Raffo has created an Iraqi family assimilating to American life, but the lead character Noura feels torn between the old and new ways.

Diana Barth writes for various theatrical publications, including New Millennium. She may be contacted at DiaBarth99@gmail.com