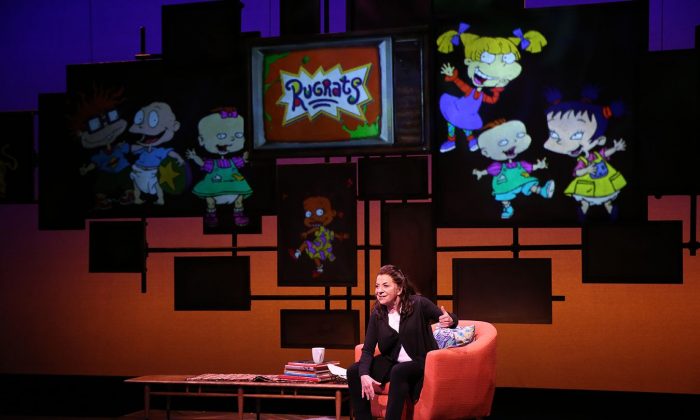 Comic and writer Monica Piper, who won an Emmy for her T.V. series "Rugrats," has a one-woman show, "Not That Jewish." (Carole Rosegg)
Arts & Culture

Theater Review: ‘Not That Jewish’

It's all about heart
By Diana Barth

NEW YORK—The title of this zany, entertaining show comes from playwright and performer Monica Piper’s early childhood experience of being told by a playmate that she “wasn’t that Jewish”: She and her family didn’t go to temple during the major High Holy Days.

Piper got over it. She learned through passionately Jewish relatives that a good Jewish heart is what defines one’s status in the community—a heart filled with compassion, humor, and a philosophical acceptance of what life throws one’s way.

Piper is a winning performer.

Perhaps because her father, an entertainer, used to perform shows in their living room, Piper gravitated toward show business and discovered she had a gift for making people laugh. After years of struggle, typical of most performers, she made it big and became a major writer of TV comedy.

Rosanne Barr commissioned Piper to write for her show; other successes followed, and Piper went on to write for other series including “Mad About You” and “Veronica’s Closet.”

Perhaps her crowning achievement was as head writer on the animated series “Rugrats,” for which she won an Emmy Award.

Her personal life, however, was a different matter. She gravitated toward men who were tall, blond, all-American, white Protestants—and married two of them.

Her last breakup followed an evening’s viewing in the theater, during which Piper’s then-hubby compared her to the somewhat vulgar actress in the show. She divorced this mate within months and decided that she would go it alone.

She did, however, have a “thing” for the famous ballplayer Mickey Mantle, and her one brief encounter with him at a restaurant was a highpoint of her life.

Although marriage ultimately proved unappealing, Piper did want to become a mother. Her true story of making contact with an unwed soon-to-be-mother who couldn’t handle the stresses of bringing up another child—she already had one—make for a moving section of the presentation.

Piper adopted the other woman’s child, named Jake. And Piper’s description of trying to diaper an uncooperative infant, while her dog looks on jealously (“Why don’t I get to wear a diaper?” she thinks he thinks), is a hilarious sequence.

Piper’s love of Jake and their warm relationship take up a large portion of the latter part of the show. When as an adolescent he comes to her and says that he’s not really Jewish because his birth mother was not Jewish—a strict interpretation of Judaism—Piper informs him that he has a Jewish heart. He has become a real mensch, a terrific human being.

You don’t have to be Jewish to enjoy this show. Piper is a winning performer able to make very clear any of the Yiddish-isms she spouts. I recommend the show for anyone who wants to enjoy hearty laughs in a comfortable, cozy setting.