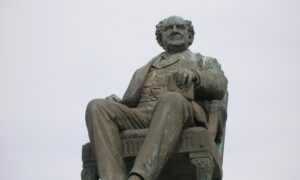 Can Hell be other people?
By Diana Barth
Print

NEW YORK—Making its first off-Broadway production in over 15 years, No Exit by Jean-Paul Sartre, the French philosopher/writer, is being presented by the Pearl Theatre Company. (The adaptation from the French is by Paul Bowles.)

Written in 1944, three months before Paris’s liberation from German occupation, Sartre’s dark, ironic comedy deals with three strangers who find themselves thrown together in what can only be seen as Hell, represented as an attractive though starkly furnished drawing room with three divans, one for each occupant.

Accompanied by the energetic Valet in a snappy red uniform (Pete McElligott), the first and only male to occupy the room is Cradeau (Bradford Cover). When the Valet leaves, Cradeau examines the room with trepidation. He doesn’t like it and wants to leave. Unfortunately, the bell pull doesn’t ring.

He is joined by Inez (Jolly Abraham), an attractive but self-interested young woman. She makes a point of evincing no interest in Cradeau. Then Estelle (Sameerah Luqmaan-Harris), the third occupant, enters. Inez is drawn to Estelle like a magnet.

All are less than confident. They soon realize they are in Hell, but wonder why this particular group has been put together. They feel each other out and attract or repel one another in turn.

It dawns on them that only by exposing each other’s past sins to one another can they figure out why they have been put here and with these particular people.

Their earlier presentations of themselves fail to hold up to scrutiny. Cradeau, the idealistic journalist, must expose his failings. The seemingly demure Estelle not only turns out to be a dyed-in-the-wool hypocrite but shocks the others when she discloses her outrageously indecent behavior. Inez has made a person closest to her suffer severe emotional pain.

The playwright has arranged it so that none of the characters can have a satisfactory relationship with any of the others; each frustrates the other. They must face what they know will be a miserable future, doomed to torture one another forever. As Cradeau remarks, Hell is other people.

The three main actors deliver commendable performances with Jolly Abraham, particularly, conveying a strong intensity in her watchfulness and criticisms of the others. Sameerah Luqmaan-Harris’s Estelle surprises with her quick change from nicey-nice matron to a representative of evil.

Bradford Cover’s journalist struggles to maintain his composure in spite of his growing realization of the hopeless situation the three must face. Pete McElligott does a nice job in his small role of Valet.

Devon Painter’s costumes are well chosen, particularly in the case of Inez’s angular print jacket. Harry Feiner’s spare set functions beautifully and is particularly effective when Ann G. Wrightson’s lighting later causes the suddenly transparent wallpaper scrim to reveal a hodgepodge of boring, ordinary objects such as radios and bed frames fastened from floor to ceiling behind the main stage. Who would want to live here?

No Exit makes for a compelling evening in the theater.