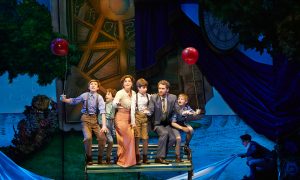 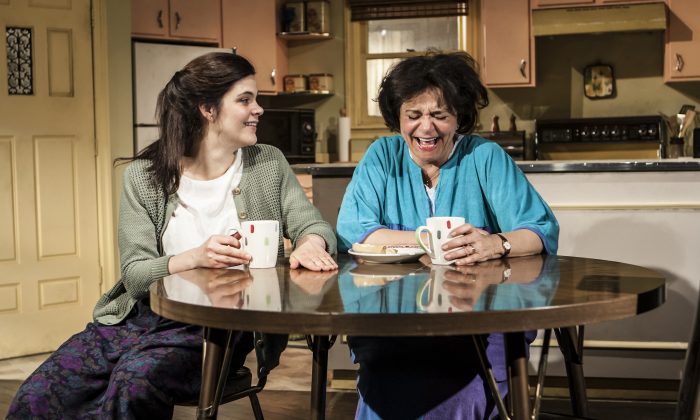 A touching search for independence
By Diana Barth
biggersmaller
Print

NEW YORK—What exactly is a nice girl? Isn’t she someone who is always sweet and accommodating? Who thinks more of others than of herself? Who places her own needs last?

Such a one is Josephine Rosen (Diane Davis), living in a Boston suburb in 1984. Jo, in her late 30s, is unmarried and still lives at home. She’s with her widowed mother, Francine (Kathryn Kates). And somewhere along the way, Jo promised her now-deceased dad that she would look after her mom after her father passed away.

And is Jo happy about the way her life is going? Absolutely not. She is miserable!

Diane Davis’s Jo is sweet, sullen, passive, and aggressive, but in whatever mood, Davis is always appealing.
“I had a scholarship to Radcliffe, and I’m a secretary!” she complains.

But a colleague at work, with whom Jo recently became close, may help Jo to tip the scales toward a more realistic view of how one can become happy or at least happier. This colleague is the vibrant Sherry (Liv Rooth, who manages to be overdone but believable at the same time). She encourages Jo to come out of her shell, to wear makeup, to date.

And Jo does meet a man. He’s Donny (Nick Cordero), whom Jo had originally known from high school and who works as a butcher.

Donny might (or might not) be the male equivalent of Jo. Time will tell. But after all, his father was a butcher before him. Now Donny appears to be following in his dad’s footsteps, honoring tradition, one might say.

After dealing with Jo’s sensitivities toward eating veal—they’re baby cows taken from their mothers, Jo sadly comments—Donny convinces Jo to settle for an interesting meatloaf mix. Thus begins their relationship.

But there are complications. Donny is still married—sort of. He’s separated from his wife, but who knows how that may play out.

In the hands of playwright Melissa Ross, Donny’s situation later turns out to be even more complicated.

Back at the homefront, Jo continually snaps at her mom. Jo holds Francine responsible for not helping her make the break years ago. But Francine points out that Jo had opportunities that she was too frightened to take.

Is it possible that Jo will take heart by her newfound support from Sherry and Donny and now be able to make the break she yearns for? Will she be able to relinquish the ties that seem to bind her to her mother?

It’s been brought out that Francine could take care of herself just fine, if push came to shove.

In the sensitive hands of director Mimi O’Donnell (also artistic director of Labyrinth Theater Company, presenter of this piece), each character’s complexities are brought out.

Diane Davis’s Jo is sweet, sullen, passive, and aggressive, but in whatever mood, Davis is always appealing.

Theater Review: ‘The Belle of Belfast’

Theater Review: ‘Finding Neverland’
Kates’s Francine might have been a boring nag, but she is shown to have compassion and understanding for her daughter, as well as fear for what might be imminent abandonment.

Liv Rooth’s Sherry is often a hoot, but she too displays many colors, going from compassion to out-and-out fury at one point.

Nick Cordero’s Donny is not just a butcher—he’s a mixed-up guy searching for the right path.

Set designer David Meyer artfully turns the small stage into a series of locales by the use of a cannily designed sliding panel.

The play brings home cultural differences between then and now. There are powerful hints in today’s society. Nice girlism may be going out of style. It doesn’t make for fulfillment. Women are more and more taking the reins of their lifestyles; they are more and more deciding their own fates. They are even running for high office.

Arguably, perhaps a mix of the two perspectives is the most beneficial to all: Think of one’s own needs, yes. But be aware that we’re all in this boat together and consider other people too, their feelings and their needs.

But back in suburban Boston in the 80s, “Nice Girl” digs into the souls of some ordinary people, searching for their own right path.

Diana Barth publishes New Millennium, an arts publication. She may be contacted at DiaBarth@Juno.com