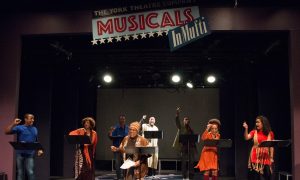 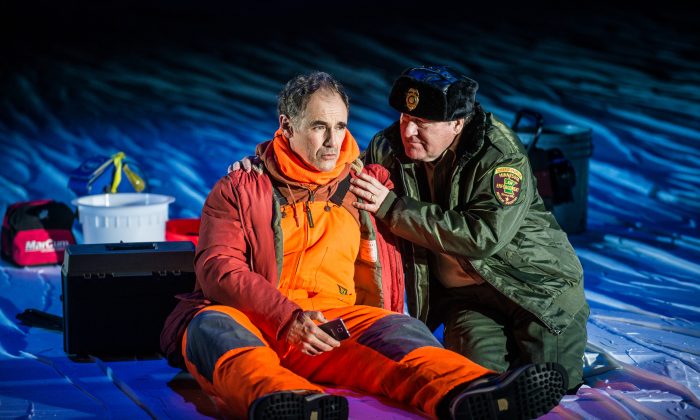 Two middle-aged men, Ron (Mark Rylance) and his friend Erik (Jim Lichtscheidl), go ice fishing on a frozen lake in Minnesota. Their talk meanders around many things—mostly unimportant things. Perhaps unimportant to some, important to others.

The play, co-written by Mark Rylance and poet Louis Jenkins, has been adapted from Jenkins’s book about ice fishing in Minnesota.

Ron is kind of a doofus, a clumsy but sweet-tempered guy, bundled up against the cold in an orange jumpsuit and parka (costumes by Ilona Somogyi). He knows nothing about ice fishing and soon manages to drop his cell phone and dark glasses into a hole in the ice. He’s just there to keep his buddy company.

Erik, on the other hand, is dead serious about ice fishing. He will sit through anything, possibly even a blizzard, waiting, waiting for that telltale twitch on the end of his fishing line, now deeply planted into the icy depths.

Erik finds time, however, to regale Ron with an incident of how he once couldn’t find his watch and thought that his own son or wife had stolen it. Of course, it had been mislaid.

A DNR (Department of Natural Resources) official, played by Bob Davis, drops by. The very soul of bureaucracy, he authoritatively informs the two men that they must have licenses in order to fish there, and he’s ready to accept their money. Although Ron and Erik insist that Ron doesn’t fish and shouldn’t require a license, a fiercely funny debate follows. Of course, the bureaucrat wins.

A lovely young woman, Flo (Kayli Carter), shows up. She is quite a source of knowledge and proceeds to provide (unrequested) information on mosquitoes’ habits, saunas, and other ephemera.

Finally, Flo’s grandfather, Wayne (Raye Birk), joins the group. He’s a bit blustery, but does somewhat liven up the proceedings.

Scenes are tart and short, divided by blackouts. Almost before one can digest one brief episode, the next is upon us. The play, co-written by Mark Rylance and poet Louis Jenkins, has been adapted from Jenkins’s book about ice fishing in Minnesota.

But it is the theatrical entity that has been created that lifts this production off the page and makes it a joy for audiences to view. The current production, at St. Ann’s Warehouse in Brooklyn, is a sellout.

Mark Rylance, a past winner of Tony and Olivier awards and who has recently won his first Oscar for Best Supporting Actor in the film “Bridge of Spies,” is always exciting to watch. As Ron, he alternates subtlety of intellect with the obviousness of a clown.

Director Claire van Kampen has come up with highly imaginative staging, no doubt with the input of a creative cast, to result in a unique theater piece.

Scenic designer Todd Rosenthal’s set, displaying a large expanse of snow with distant (thus minuscule) houses and cars in the background, some of which move, completes the picture of a world that is both real and unreal, enhanced by Japhy Weideman’s lighting and Scott Edwards’s sound design.

“Nice Fish,” which was originally commissioned and produced by The Guthrie Theater in Minneapolis, has come directly to St. Ann’s Warehouse from the American Repertory Theater in Cambridge, Massachusetts.

Diana Barth writes for several publications, including her own New Millennium, an arts publication. She may be contacted at DiaBarth@juno.com