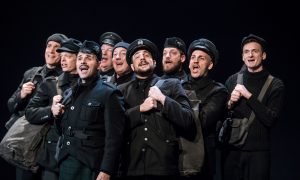 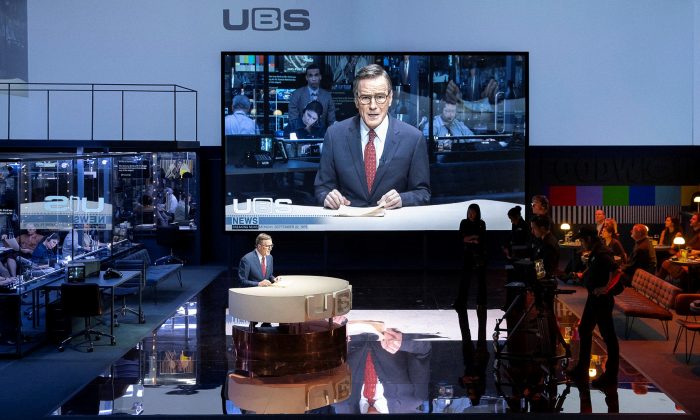 Bryan Cranston as Howard Beale is superb and the set of “Network” is stunning. (Jan Versweyveld)
Performing Arts

News as showbiz and show-buzz
By Judd Hollander
biggersmaller
Print

NEW YORK—It’s one thing to rail against an oncoming storm, as Paddy Chayefsky depicted in the 1976 film “Network,” a dark satire about the media and corporate mentality. It’s something quite different when the storm is already here. This is the state of our culture today, one which welcomes Lee Hall’s adaptation of the Chayefsky work for the Broadway stage.

One evening after his nightly newscast, respected journalist and longtime UBS-TV anchorman Howard Beale (Bryan Cranston) is given his two-week notice from his job of 25 years. The reason: low ratings.

Indeed, UBS itself is in trouble. Diana Christensen (Tatiana Maslany), the director of programming, refers to the network as “an industry joke.” In addition, the company’s new corporate owners are planning a massive reorganization in an effort to stem the tide of red ink.

The company’s plans do not sit well with Max Schumacher (Tony Goldwyn), head of the news department. In a bit of irony, it is Max who tells Howard his time at UBS is over, and now Max sees his own future at the network in jeopardy.

Howard, disgusted with how he’s been treated, and feeling he has nothing to live for, goes on the air the next night and announces he will blow his brains out on live TV before his final broadcast. Not surprisingly, his actions create a media buzz not seen for the network in a long time. The buzz continues with Howard’s subsequent appearances, which at first are allowed by Max and then deliberately orchestrated by Diana, who, seeing in Howard a ratings bonanza and cash cow for the network, builds an entirely new, reality-type of show around him.

It quickly becomes apparent that Howard is not alone in his anger at being told he doesn’t matter in the grand scheme of things. His ever-growing audience looks to him to speak for how they feel, as they all collectively rage against factors beyond their control. (And here the connection to social media becomes obvious.)

However, when Howard’s nightly commentary starts making those in power nervous, matters take an ominous turn.

The years since Chayefsky first penned “Network” have made Howard Beale’s reign as “Prophet of the Airwaves” somewhat quaint, given the explosion of reality television and social media. Yet, this is exactly what makes the story’s message more powerful than ever.

The work is basically a gigantic wake-up call, with the underlying question being: Is anybody listening?

When Howard takes what begins as an on-air meltdown and turns it into a personal epiphany, his eyes are opened for perhaps the first time about how the world really works. All those watching him are carried along by his explosion of anger and pent-up frustrations.

Yet in a devastating, ironic twist, when Howard eventually is faced with the ultimate truth and tries to pass this information along to the masses, he starts losing viewers because his message is deemed too serious and too boring. His audience of true believers simply wants to be entertained. Alternatively, the viewers want someone to tell them not to worry about such things because other, more experienced people can deal with these matters.

Cranston turns in nothing less than a tour-de-force offering as Howard Beale. Taking what could easily have been an over-the-top caricature, he creates instead a prototypical forgotten everyman. It’s a credit to the actor’s performance that Howard comes off as completely real—particularly since there is so little back story to the character.

This lack of characterization also reveals a major flaw of the piece. So intent is Hall’s adaptation on sticking to the letter of the original story that it fails to expand on it. This is particularly evident when it comes to the characters of Diana and Max, neither of whom are as developed as they should be.

It doesn’t help that Maslany’s portrayal of Diana doesn’t come close to showing the amount of steel or passion the character calls for. Goldwyn, meanwhile, is amiable enough as Max, a person worn down by life, but is never really engaging enough to hold our interest.

The rest of the cast, other than Alyssa Bresnahan in a brief turn as Max’s long-suffering wife, are basically interchangeable.

Ivo van Hove’s direction also feels somewhat off at times. When it comes to giving a behind-the-scenes look at a television newsroom, with all its technological toys and flashing lights, the production works perfectly. Just as it does with all of Cranston’s scenes. Yet in terms of being a complete and fulfilling story on a human level, it feels flat. The audience becomes voyeurs rather than empathetic participants.

Technical highlights include scenic and lighting design by Jan Versweyveld, video design by Tal Yarden, and sound and music by Eric Sleichim. Of course, all of their work accentuates the artificial atmosphere of the show rather than any underlying humanity.

Both powerful and timely, the stage version of “Network” presents a version of a once-implausible reality that has now come to pass. It is all too obvious that we are the viewers the show is trying to awaken, and who knows what might happen if it actually did?