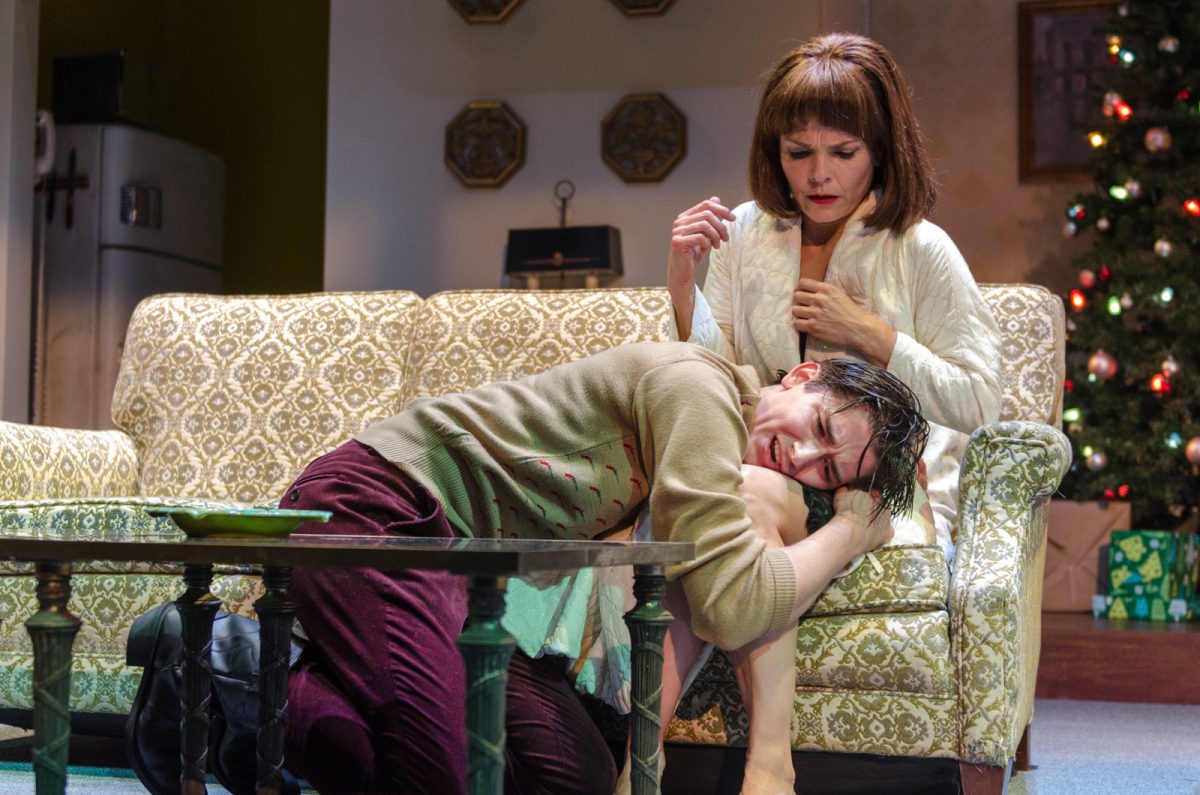 A mother and son yearn for connection
BY Diana Barth TIMEOctober 9, 2013 PRINT

NEW YORK—In “Natural Affection,” William Inge has brought together an incendiary mix of characters and situations bound to reach a boiling point.

In a smallish Chicago apartment, near Christmas in 1962, Sue Barker (Kathryn Erbe) lives with Bernie Slovenk (Alec Beard). Because she earns more as a department store buyer than he does selling automobiles, he refuses to marry her. When his situation improves, he affirms, they will marry.

But the situation is to become tenser, as Sue’s son, Donnie (Chris Bert), is set to arrive shortly for a visit of a few days. Mother and son have not been close over the years, as she had been forced to give him to an orphanage when Donnie’s father abandoned them even before Donnie was born.

Sue had visited Donnie from time to time in his last residence, a work farm that Bernie cynically calls “a reform school.” Donnie had been “in trouble” in the past.

Bernie obviously feels put upon by the boy’s impending visit, augmented by the fact that Bernie had been in an auto accident that day while using his boss’s car, and he senses that he will be fired as a result.

When Donnie, an attractive but shy lad of 17, arrives, it’s clear that he wants to stay beyond a few days. Sue, taken aback, is now in conflict, fearing that Bernie will react negatively to this possibility. She is thrilled to see her son but fears for her much-desired relationship with the man in her life.

Sure enough, Bernie and Donnie mix like oil and water. An underlying tension pervades, while on the surface both men try to maintain a civil approach.

The family relationship is further stressed by the frequent visits of nearby neighbors Vince (John Pankow) and Claire Brinkman (Victoria Mack). Vince, much older than his wife, gives Claire expensive gifts, feeling he must constantly try to keep her interested in him. He also suspects that there’s more than simply neighborliness between Bernie and Claire, and in a later scene, both Vince and Sue become aware of this truth.

Donnie exhibits intensely clinging behavior toward Sue; she is the mother he has hardly known. There is almost an inappropriate urgency to his behavior, which Sue discourages abruptly. He is also extremely nervous and sometimes displays an underlying, generalized hostility.

On Christmas Eve, when the entire group is about to go and celebrate in a nightclub, Vince drinks himself into a stupor and behaves grotesquely, offending everyone else. Then he passes out, and the others leave without him.

After the evening out, once poorly disguised tensions now come to the surface, leading to extreme behavior and finally erupting into violence that can never be repaired. Everyone’s life is more than changed. The lives, particularly those of Sue and Donnie, are torn asunder.

The play resonates with sadness and lost opportunities. It is sad, too, because much of what transpires is close to what many people experience today, more than will admit it. Such incidents often reach newspaper headlines.

Lovingly directed and carefully cast by Jenn Thompson, the entire cast shines. Kathryn Erbe treads a delicate line between being a loving mother and a woman trying to protect her turf. Alec Beard displays a rough vanity; he has been referred to as a Polack by Vince.

As Donnie, newcomer Chris Bert displays a remarkable sensitivity and understanding of a complex, needy character. In a talk-back following the performance, it was stated that “Natural Affection” marks Mr. Bert’s first professional theater performance.

John Pankow’s Vince exhibits just the right tone for a man disappointed in his dreams and in his marriage. Victoria Mack’s overtly suggestive Claire also hits the right note. Rounding out the cast are Tobi Aremu and Eve Bianco.

A seldom-produced work—“Natural Affection” has not been seen in New York since its 1963 Broadway debut—it is worthy of being on the list of William Inge’s renowned plays, which include “Picnic,” “Come Back, Little Sheba,” “Bus Stop,” and “The Dark at the Top of the Stairs.”