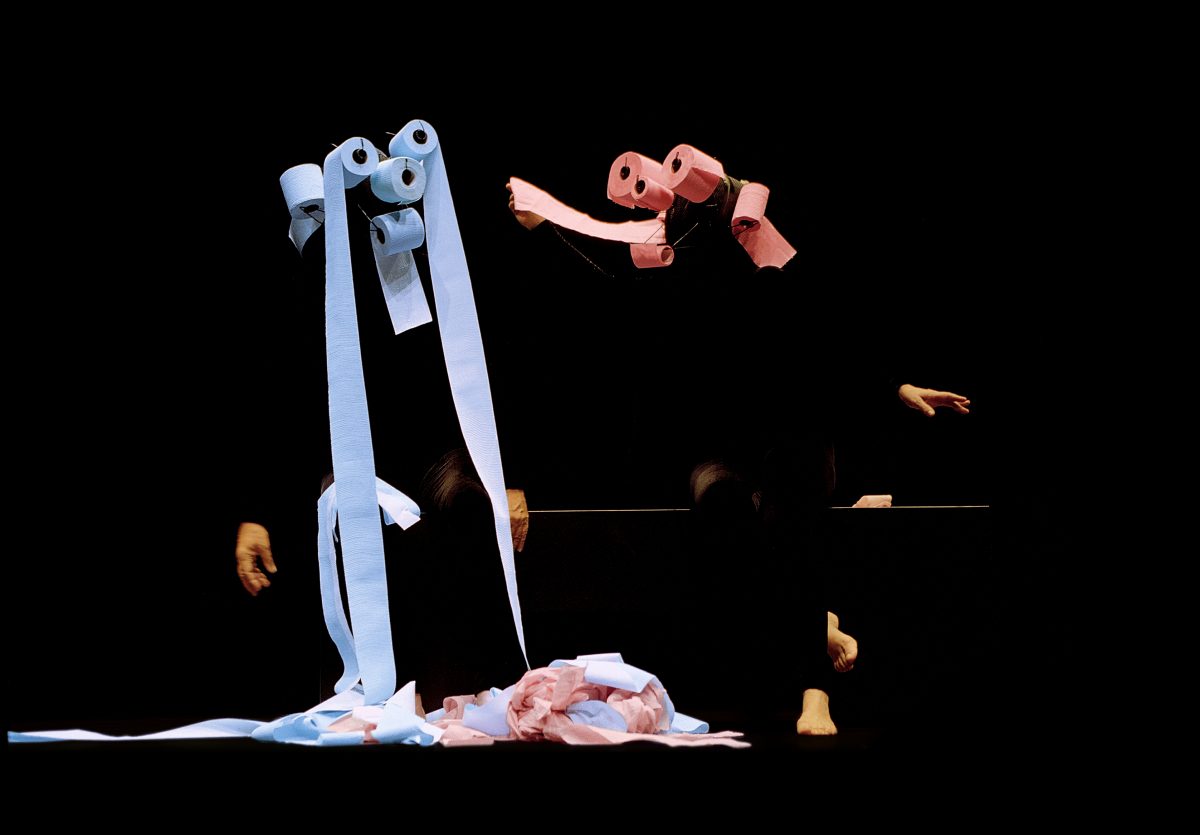 NEW YORK—There’s something comforting about a show that has no real objective other than to make you sit back, smile, maybe appreciate its aesthetic effort, and cause you to squeal with delight. The latter is especially true if you happen to be a child—or a child at heart.

This relaxed atmosphere is provided by the internationally famous mine troupe Mummenschanz during its current and sadly all-too-brief stand at New York City’s Skirball Center for the Performing Arts.

This particular production of Mummenschanz is subtitled The Musicians of Silence, and it’s an apropos moniker indeed. The four performers (Floriana Frassetto, Philipp Egli, Raffaella Mattioli, and Pietro Montandon) effortlessly make their work speak volumes without one sound ever being uttered.

The show itself, a mixture of old favorites—such as a giant hand who pulls back the curtains, waives to the audience and gives the thumbs up sign—and new offerings, had a decidedly underwater feel. Among the denizens of the deep making appearances were a multi-tentacled inky-black octopus, a jellyfish, and a seahorse.

Also included in the mix were two swans that appear to be in love; a group of garment bags, and some ever-changing triangles, which took on such forms as a preening cat and a dancing woman.

One of the best things about Mummenschanz is that the performers bring human emotions to the creatures they embody. There is the emotion of anger of a smoke stack-looking figure, which becomes mad at the audience when they don’t play with the gigantic balloon it keeps tossing at them—one of several instances of audience participation during the performance.

There is also the frustration of a ball-like object being unable to climb over an obstacle it encounters. It reminded one of those things that gobble up whatever’s in their path in a Pac-Man game.

There is also the tears (toilet paper) rolling out of a creature’s eyes when its attempted romantic overtures to another of its kind appear to be rebuffed. And there’s also a pipe-like figure that enjoyed showing off its muscles while swaggering about—kind of like the wannabe tough kid at a schoolyard.

Another particularly amusing sequence features two figures with faces of bendable clay, each alternately preening for the audience by changing its appearance and; after tiring of that, changing the face of the other in an apparent grudge match that quickly devolves into something akin to slapstick.

If there’s a word which could describe the actions of the performers, it would have to be “graceful.” Every object and creation presented moves with an ease and surety that brings forth sighs of amazement from those watching.

In addition to the sights described above, other objects include streamers darting around the stage; a large piece of paper with a face on it, which continually appears and disappears; and a gigantic boulder that threatens to tip over into the audience.

It helped that this particular performance had a close to sold-out audience, all quite enthusiastic about what they were seeing. The performers nicely play off the spectator responses and reactions.

Offering a truly unique theatrical experience, Mummenschanz is fun for the entire family. The company has a very special way of looking at things that never fails to surprise and delight those lucky enough to be in attendance, whether they are seeing it for the very first time or for the twenty-seventh.