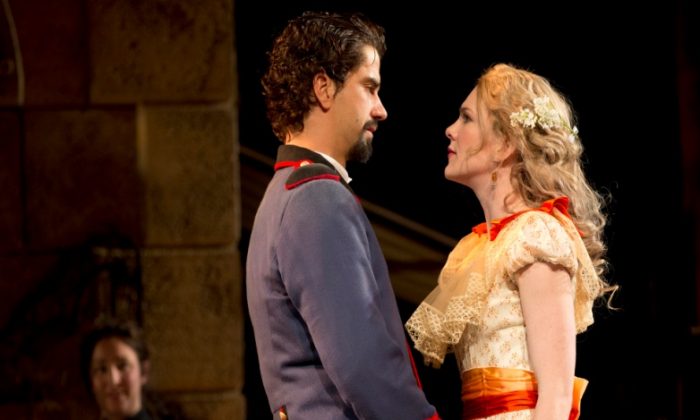 Theater Review: ‘Much Ado About Nothing’

NEW YORK—Sometimes there just is no place like New York. Sitting in Central Park on a beautiful summer night, watching a performance of Shakespeare’s brilliant comedy Much Ado About Nothing with a gifted cast and wonderfully inventive set by John Lee Beatty is hard to top. Add to that a rainbow framing the set the night this writer saw the production and the ambiance is perfect.

Shakespeare in the Park is free, but this kind of performance makes the long lines of brown-baggers who start in the early morning hoping to get a couple of treasured tickets totally understandable and definitely worth the wait.

Tony nominee Lily Rabe as Beatrice and Hamish Linklater as Benedick head the outstanding cast as the would-be lovers.

Rabe is the daughter of playwright David Rabe and the late actress Jill Clayburgh, but she has firmly established her own acting reputation, much of it in Shakespeare; Linklater has numerous television and stage credits as well, perhaps best known for The New Adventures of Old Christine.

Brian Stokes Mitchell brings new life, humor, and song to the normally unremarkable Don Pedro. This is the first Shakespearian role for Stokes, yet peals of laughter could be heard from the appreciative audience throughout the performance.

Hero (Ismenia Mendes), daughter of the governor of Messina (played so well by John Glover) has her reputation wrongfully besmirched by Don Pedro’s evil brother (Pedro Pascal) on the eve of her wedding to Claudio.

Good news is that all ends well, and the cast received a rousing and well-deserved ovation for the finale.

For those who are not able to score tickets, fear not. Another Shakespeare play, King Lear, is in the offing for Central Park and the Public Theatre and is planned to run July 22–Aug. 3.

Nanci Callahan is the founder and managing director of the west side cultural center. She has written for many publications including New York magazine and Noticias del Mundo.