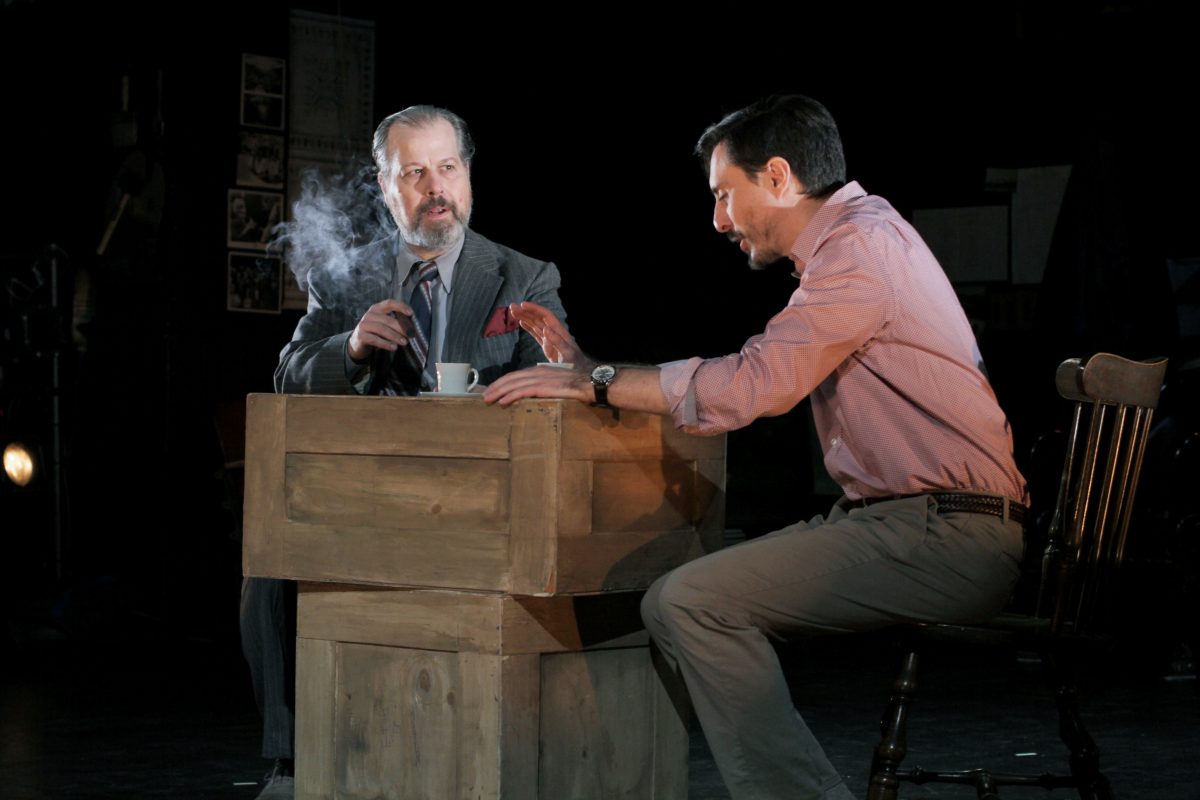 The cost of genius
BY Diana Barth TIMEFebruary 25, 2019 PRINT

NEW YORK—Video producer Frank Beacham has based his play “Maverick” on experiences he had with the late Orson Welles in the latter days of the famed actor-director’s life.

Beacham (played by Stephen Pilkington) had always admired Welles (George Demas), so when he had an opportunity to work with him, he jumped at the chance. Beacham had produced such programs as the vapid “Lifestyles of the Rich and Famous” but wanted to be affiliated with “high art.”

Beacham, who considered Welles to be a major genius, was to find that he had to pay a big price for his association with genius. Welles was like a demanding child, ordering Beacham around like a slave, even though at the time Welles’s status in the film industry was diminishing. Gone were the glory days of “Citizen Kane” and “The Magnificent Ambersons.” Now, Welles was in the subservient position of having to plead for funding for his projects.

Here’s where Beacham suited Welles’s purposes. Beacham was a good fundraiser, and Welles’s budgets were always over the top. Furthermore, Beacham had in his possession a new type of video camera: the Betacam. It was the first hand-held camera that could photograph and record simultaneously without the complicated paraphernalia of movie-set filming.

Welles hadn’t done a big studio film in years. Besides, he was angry that the studio had butchered his “Touch of Evil.” It was his hope that Beacham could help him produce a video version of “King Lear.”

But the demanding Welles lost more associates than he won. Producer John Houseman (Pilkington), who had worked closely with Welles, now has artistic disagreements with him that finally lead to the end of their relationship.

A business associate (Alex Lin) of Beacham’s walks out on him because Beacham could never specify a workable budget for the Wellesian projects, and she fears for her financial safety.

Most of the scenes in “Maverick” are brief and episodic, as in a film, but one longer episode illustrates Welles’s overweening ego. He considers the wonderful technical resources of UCLA’s theater department for a possible project, but stiffly bows out when the university administrator insists that Welles must reciprocate by teaching a master class there.

For George Demas, “Maverick” is apparently a labor of love, inasmuch as he has co-written (with Frank Beacham) and co-directed it (with David Elliott) and plays the leading role. His appearance bears a close resemblance to the former star. He has the gait and deep voice, but lacks the hauteur of the original. Yet he gives an attractive performance.

Produced by Pam Carter with the Cliplight Theater, the play’s style is stark, terse, and direct, like the text. The gray garb (by Jess Gersz) of all participants except the three leading players creates a pleasant monotone sense of a black-and-white film—Welles’s métier.

The set by Tekla Monson makes terrific use of the large stage of the East Village’s Connelly Theater, formerly an opera house, filling it on two levels with various bits of flotsam and jetsam of chairs, tables, and the proverbial work light. It creates a sense of either an abandoned theater stage or a movie set. The bright gold proscenium makes a vivid frame for the proceedings.

Not as exciting as it could have been, perhaps, “Maverick” offers a welcome glimpse into an earlier era of theatrical activity, and into the personality of a genius who burst like a flaming candle onto the scene and, sadly, flickered out at the end.

Welles died at only age 70, alone at his typewriter, according to Beacham.

Diana Barth writes for various theatrical publications and for New Millennium.  She may be contacted at diabarth99@gmail.com