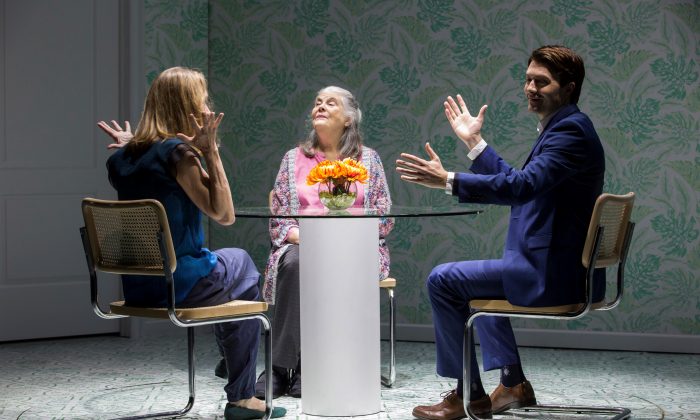 Fusion of memory and reality
By Diana Barth

NEW YORK—Playwright Jordan Harrison’s “Marjorie Prime” might be called a memory play. I think of that most delicate of memory plays, Tennessee Williams’s “Glass Menagerie.” But, oh, the two works are so different from one another.

“Marjorie Prime” is modern, up-to-date—or beyond—perhaps scarily so.  Here we find ourselves in the age of technology and artificial intelligence. People may even become computers, or at any rate, computer-like.

Eighty-five-year-old Marjorie (Lois Smith) sits in her serene (perhaps too serene) living room, lovely in its soft shades of green (courtesy of scenic designer Laura Jellinek). The atmosphere has an oddly spare feel to it, almost otherworldly.

Marjorie is speaking with a very young, handsome man called Walter (Noah Bean). It comes out that Walter is her deceased husband’s name, but why the disparity in their ages?  They speak of old times; he informs Marjorie of things she may have forgotten. On the other hand, she reminds him of certain past events.

Walter is an avid student; one can tell he will virtually commit to memory her information. You see, Walter is actually a computer, programmed to support and educate Marjorie. He is known as Walter Prime.

Primes are not live humans. Marjorie was given the opportunity to select Walter Prime at an age when he was young and attractive.

An unsettled feeling pervades. What might the future bring?

Walter Prime retreats to the sidelines as Marjorie’s daughter, Tess (Lisa Emery), and her husband, Jon (Stephen Root), enter. They know nothing of this version of Walter, for the real Walter is actually long dead.

Tess and Jon are very concerned about Marjorie’s well-being. Her food intake is very poor; she seldom eats so much as a spoonful of peanut butter.

Tess is a bit fluttery, neurotic. It is Jon who is the steady one here; he is solicitous of both of the women in the household, although Marjorie had once not liked him at all. She had complained of his beard, “down to the floor.”  But now he is clean-shaven, and she has gotten to like him.

Will robots, or robotic thinking, take over?

The mention of Damian is a sore spot for Marjorie. At age 13, he died under tragic circumstances, and it is obvious that Marjorie wants to erase all memory of him. But memory is a tenacious thing.

Marjorie and Tess’s relationship has not always been a good one. Tess always felt that Marjorie had favored Damian, and her competition against her dead brother always failed. Thus there’s always been an uncomfortable feeling between mother and daughter.

Not long after, Marjorie dies and becomes a Prime. Both Tess and Jon have a tricky time dealing with her. But much later, Tess and Jon also become Primes.

The deceased now relate more favorably with the play ending warmly. Marjorie says something to the effect that it is wonderful to have loved someone. She has at last chosen to remember her beloved son, Damian.

How nice, how comforting to have the play end on such a warm note. Love. Love conquers all. But does it?

Or is the playwright suggesting complacency dulls the edges of what might enter one’s consciousness as pain, suffered by the introduction of unwelcome memories?

What if love is spare or sparse, or intermittent? Or nonexistent? Does that possibility open the door for the technicians, the mechanics, the most ruthless of scientists to take over our lives?

Will robots, or robotic thinking, take over?

But don’t fret. Aren’t robots doing wonderful things? What about those cute little guys who can clean our floors and carpets and give us time to rest. What about those more serious kinds that go where humans don’t dare to tread and test for live bombs that might wreak havoc if undetected.

An unsettled feeling pervades. What might the future bring? Mind control? Extensive brain-washing? Loss of that individuality that so many of us honor and cling to? Personality as we know it? In exchange for what?

Is it not incumbent, then, for the rank and file citizen to keep abreast of developments in science, technology, and politics?

The play is subtle, so much so that one must listen closely to follow the sometimes quicksilver developments. There is a delicate interweaving of emotional pain, memory, forgetfulness, against the ever-present backdrop of the new age we seem to be entering.

With gifted director Anne Kauffman holding the reins, the cast provides a marvelous example of the finest ensemble playing. One must offer special kudos to Lois Smith for her detailed portrayal of an elderly woman who is alternately feisty, sad, and accepting.

Lisa Emery’s Tess combines warmth and coolness. Stephen Root is the picture of support, who can melt in emotional tears when required. Noah Bean portrays a very handsome and attentive Walter.

All told, “Marjorie Prime” makes for a very provocative and rewarding evening in the theater.

Diana Barth writes for various publications, including her own New Millennium, an arts publication. She may be contacted at diabarth@juno.com